Trombonist and very occasional violinist and singer Lou McGarity, who died in 1971, was both reliable and inspiring.  I think I first heard him on recordings with Eddie Condon, with Lawson-Haggart, and with a wild 1941 Goodman band that included Mel Powell, Billy Butterfield, and Sidney Catlett, who gave McGarity the most extravagant backing.  Lou was a delightful presence, someone who could electrify a performance with a shouting yet controlled eight bars.  I also gather from his discography that he was an expert section player and reader, for many of his sessions have him surrounded by other trombonists.  But Lou very rarely got to lead a session on his own aside from two late-Fifties ones.
He traveled in very fast company, though, as in this gathering at the Ertegun party, held at the Turkish Embassy in 1940.  (Photo by William P. Gottlieb):

Let us have a long pause to imagine what that band sounded like, and to lament that it wasn’t recorded.
But onwards to 1955.  I imagine that someone at M-G-M, not the most jazzy of labels, decided that it would be a good idea to have some “Dixieland” to compete with the product that other labels were making money on.  I don’t know who arranged this session (Leroy Holmes? Hal Mooney?) but McGarity was an unusual choice: a thorough professional with fifteen years’ experience, however with no name recognition as a leader.  Was he chosen as nominal leader because he wasn’t under contract to any other label or leader?  And, to make the session more interesting, the four titles are all “originals,” suggesting that M-G-M wanted to publish the compositions themselves or, at the very least, pay no royalties for (let us say) MUSKRAT RAMBLE.  I’d guess that the compositions and arrangements were by the very talented Bill Stegmeyer. 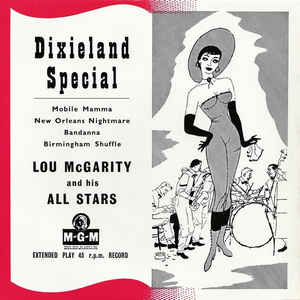 Most of the personnel here is connected, on one hand, to Eddie Condon sessions of the Fifties, on the other to the Lawson-Haggart Jazz Band. There’s Lou, Yank Lawson, both Peanuts Hucko and Bill Stegmeyer on reeds, Gene Schroeder, Jack Lesberg, and Cliff Leeman.  And here’s the music.  I say gently that it is more professional than explosive, but I delight in hearing it, and hope you will too.
MOBILE MAMA:

A mystery solved, with pleasing results.