I don’t know what the proliferation of inscribed photographs of Jack Teagarden says about his, the circumstances, his popularity.  But since I’ve loved his music since childhood, I prefer to see these photographs as indications of a generous character, a man who appreciated his fans and was happy to make even the most fleeting connection with them.  For a start, “Edith” must have been made happier by this:

and this later pose: 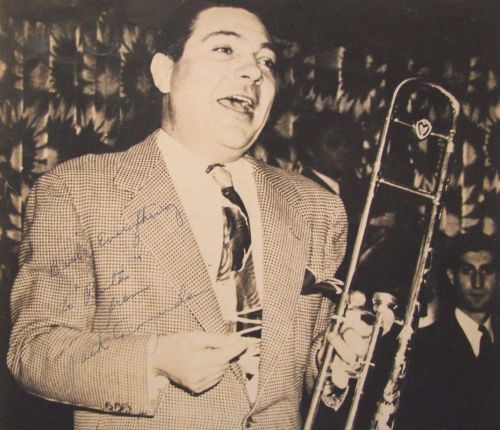 and a long sweet [although general] inscription, when Jack was being managed by MCA — circa 1939, if you know his lyrics to JACK HITS THE ROAD:

and “Warmest regards to a Swell Fellow ‘Pat'”:

Then, some official business from 1943:

Even late in life — perhaps a year before his death — Jack retained his mastery, a mastery so deep that he made his great art look casual.  Here he is in Chicago, on television (the host is Willis Conover) performing BASIN STREET BLUES with Don Goldie, Henry Cuesta, Don Ewell, Stan Puls (I think), and Barrett Deems:

Like Loading...
This entry was posted in "Thanks A Million", Bliss!, Generosities, Irreplaceable, It's All True, Jazz Titans, Pay Attention!, Swing You Cats!, That Was Fun!, The Heroes Among Us, The Real Thing, The Things We Love and tagged BArrett Deems, Don Ewell, Don Goldie, Henry Cuesta, Jack Teagarden, Jazz Lives, Local 802, MCA, Michael Steinman, Stan Puls. Bookmark the permalink.