A nice bio of trumpeter / vocalist Taft Jordan is available here, which is also the source for the photograph.

The idea was John Hammond’s, and one that we are grateful for.  The usual story is that Hammond worked hard to get the music he loved on record, to make opportunities for racially mixed bands.  He succeeded beautifully: most readers know this part of the story as preface to the 1933-42 Billie Holiday sides.

But other parts of the story deserve attention.  There is, for one thing, the success of the coin-operated phonograph (later, the “jukebox”) that could offer people recorded music in restaurants, bars, and elsewhere for what seems to us like a bargain: a nickel would get you three minutes of new music.  But a 1935 nickel was much more than the ninety-nine cents per song that iTunes charges.  (A contemporary advertisement shows Easter dresses for $1.95, and a skilled worker for the W.P.A. might earn $79 a month.)

And, at the time, commercially produced records were — as it says on the label — “not licensed for radio broadcast.”  I think that coin-operated phonographs served the audience’s desire for novelty (“Let’s hear that new record of ______ by Erin Morris and her Ponies!”) — songs from new movies, new songs popularized by much loved bands and singers . . . and for five cents, one could have a side played for a gathering of listeners and/or dancers.  The record labels pictured above are now called “dime-store,” because one could  buy these records inexpensively at, say, Woolworth’s.

Radio and recordings created a need for new material, so many songs, not all memorable, were published, with a clear financial relationship between composers / lyricists, publishing companies, artists, recording supervisors, and record companies.  (A small example: IF THE MOON TURNS GREEN was written by Bernard Hanighen, Billie Holiday’s friend, also a recording director at Brunswick Records.  He would have been happy — aesthetically and financially — to have his song recorded.)

Taft’s four sides run parallel to other small groups led by Fats Waller, Henry Red Allen, Bob Howard, Putney Dandridge, Stuff Smith, Adrian Rollini, Tempo King, Cleo Brown, Lil Hardin Armstrong, Frank Froeba, Bernard Addison, Louis “King”Garcia, Stew Pletcher, and others.  I’ve heard writers say these sessions were “cranked out for the jukebox trade,” but these records are lovely, imperishable.  That there were only four sides says more about an audience’s awareness of Taft as a star than about their quality.  Some listeners might have known him from the Savoy Ballroom and radio, but not many.  When the records were later reissued in the UK (the red-and-gold Vocalion issues) Teddy Wilson had become famous enough so that his name would sell discs.

The artists made little or nothing for these sessions: they were paid “scale,” although they were pleased to make the extra money.   The math is fascinating, a quiet recital of economic disparity, even at the remove of eight decades.  Let us say a band of eight musicians made four sides for $50 a musician.  The records were pressed, distributed, and ended up in the phonographs.  One could hear a side once — no limit on the number of hearers, theoretically — for a nickel. The machine could take in twenty nickels in an hour.  In 1935, the profit went to the record companies and the owners of the phonographs. Later (too late, perhaps) musicians and composers received royalties, but that is another story.

Yes, mechanical reproduction of art guarantees “exposure,” but one cannot eat exposure.  I am aware of this from both sides as an interloper with a video camera who can only recompense musicians in insubstantial ways.

I offer these notions, some of them quite sad or infuriating, as preface to wonderful music, and also to point out that an unstable, often exploitative relationship between the artists, “the marketplace,” technology, and lasting art is not a twenty-first century issue.

What good songs these “disposable” pop tunes are — thanks to Rothberg, Coots, Alex Hill (yes!), and Hanighen.  And the players, professionals all, were used to sight-reading and creating instant arrangements — with split choruses, riffs, backgrounds.  To take one example, LOUISIANA FAIRY TALE, still recognizable, is a series of thirty-two and sixteen bar solos with rhythm (and what a rhythm section!) with a jammed ensemble ending.  How fine it sounds now.  One could spend an afternoon listening to the glowing epigrams Wilson dispenses, the variety of timbres the horns offer, solo and in ensemble.

In my collecting history, these four sides were part of a Columbia Chick Webb lp compilation — glorious gap-fillers, but also logical because of Taft’s role in the band.  Mince and Silloway were with Tommy Dorsey; Skippy Williams, Bobby Johnson, and John Kirby with Webb also; Eddie Dougherty a busy free-lancer. Wilson had not yet joined the Goodman orchestra as a member of the Trio and Quartet, but had recorded with BG in ad-hoc studio groups.

What we have here — each side is less than three minutes long — is both superior dance music and small-band swing of the highest order, pleasing to all audiences.

In my time-travel fantasy, I would like to be a silent onlooker at one of these sessions, but I doubt the musicians romanticized such work.  It was another way to pay the rent, perhaps (for the lucky sideman) to get some recognition for future leader’s gigs . . . or perhaps, after creating four quiet masterpieces, the guys went out for a drink or some ribs, a nap before the night’s work.  If I’d asked Taft about these sides in 1972 /3 and later — I didn’t see him at close range — I wonder what would he have said.

DEVIL IN THE MOON:

IF THE MOON TURNS GREEN:

All four of these songs were also recorded “with vocal chorus” by Taft, a charming Louis-influenced singer (consider his work with the Washboard Rhythm Kings and Webb) but none of the vocals was issued.  Mysterious.  I know there is an alternate take of NIGHT WIND issued on a Jerry Valburn collectors’ compilation, but it’s instrumental. 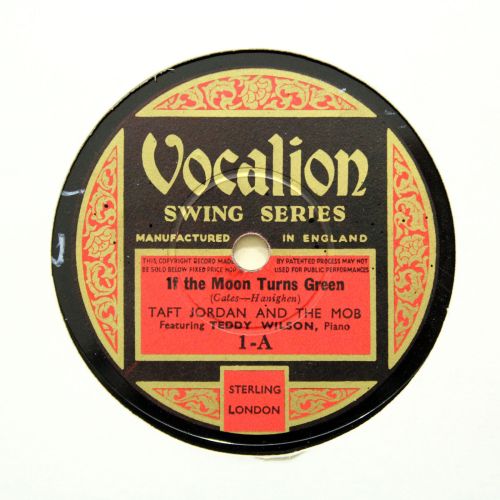 Does anyone know more about Eddie Dougherty than is published in John Chilton’s WHO’S WHO IN JAZZ?  I have learned that he recorded between 1933 and 1952 or a little later, that he lived in Brooklyn, and, according to Johnny Williams via Mike Burgevin, that he pronounced his last name as if spelled Dockerty.  But no more.

The music remains.  And I, for one, am truly grateful for that.

Taft as a member of the Ellington orchestra. Photograph by Charlie Mihn, courtesy of Chuck Slate.

As a postscript, here are four contemporaneous versions of DEVIL IN THE MOON — in honor of the Blessed Alex Hill.  I think they are all beautiful, so this is not to make insidious comparisons.

Mills Blue Rhythm Band (with an incendiary Buster Bailey interlude that the expert dancers must have loved):