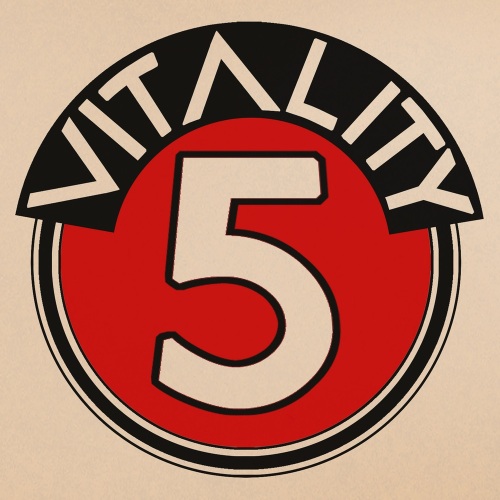 The VITALITY FIVE (and its band-within-a-band, the VITALITY THREE) are the real thing, and the quintet has released its debut CD, which is a complete delight.  They are a hot jazz band; their performances marry ferocious energy and precise delicacy.

I know three of these Syncopators in person and will vouch for their Credentials of Hot.  Their biographies can be found here.

But mere words have their limitations, so here is audio-visual evidence:

and a Morton trio:

The repertoire on this CD says a great deal about the players and their overall conception.  Familiar hot tunes: EAST COAST TROT, MOJO STRUT, SMOKE-HOUSE BLUES, SHE’S CRYING FOR ME, WA WA WA — and the less familiar MOTEN STOMP, KANSAS CITY BREAKDOWN (both early Bennie Moten), CLARINETITIS (another Benny), STEAMBOAT STOMP (Boyd Senter), DIXIE (Adrian Rollini, for his wife), the pop tune IF YOU WANT THE RAINBOW, and the never-played DESDEMONA, BLACK RAG, REVERIE, RETOUR AU PAYS, suggesting a deep immersion and erudition about this period of music.  Although the credits say “transcriptions,” it’s easy to see that when you “transcribe” WA WA WA or SMOKE-HOUSE BLUES for this singular ensemble, it is much more a transformation.  And it’s thus a lively reimagining.  JAZZ LIVES viewers with memories will know Michael McQuaid, Nicholas Ball, and Martin Wheatley as peerless musicians; I assure that David Horniblow and Andrew Oliver are nothing short of spectacular.  In fact, the entire ensemble has an appealing looseness precisely because they are honoring the originals and the originators without striving to provide copies of the records.  So this is hot jazz of the middle Twenties that is also aware that it is no longer 1926, which is fine with me.

All I know is that it took an act of will to pry the disc out of the player.  The band’s website is here.  To purchase the CD, visit here.  I can assure you that this quintet superbly lives up to the band’s name.

And thanks to Julio Schwarz Andrade, of course.