Most summers the boy returned to New Orleans for a month or so, and accompanied his father on trips up and down the Mississippi aboard the riverboat on which Mr. Persons worked as a purser. Truman learned to tap dance, he said, and was proud of the fact that he once danced for the passengers accompanied by Louis Armstrong, whose band was playing on the steamboat.

The source of this anecdote is an excerpt Capote included in his 1973 anthology of his own prose, THE DOGS BARK.  (The rest of the quotation is, “and the caravan moves on.”  Make of that what you will.) 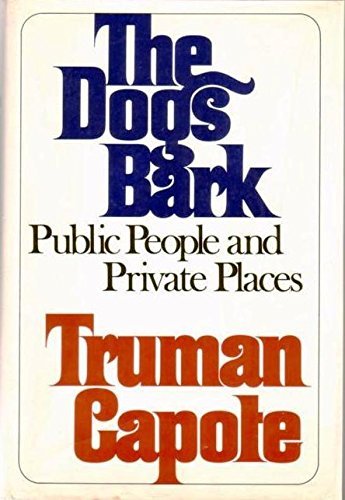 Thanks to Professor Barbara Bengels of Hofstra University, who has observed my obsession with Louis for decades, I can now offer you the Truman Meets Louis story.  It appears in an anthology for freshman college students, and the headnote reads, in part, “. . . Capote uses a unique blend of sensual and realistic description to convey to us his fondness for one of jazz’s all time greats”:

Surely the Satch has forgotten, still, he was one of this writer’s first friends.  I met him when I was four, that would be around 1928, and he, a hard-plump and belligerently happy brown Buddha, was playing aboard a pleasure steamer that paddled between New Orleans and St. Louis.  Never mind why, but I had occasion to take this trip very often, and for me the sweet anger of Armstrong’s trumpet, the froggy exuberance of his come-to-me-baby mouthings, are a piece of Proust’s madeleine cake: they make Mississippi moons rise again, summon the muddy lights of river towns, the sound, like an alligator’s yawn, of river horns–I hear the rush of the mulatto river pushing by, hear, always, stomp! stomp! the beat of the grinning Buddha’s foot as he shouts his way into “Sunny Side of the Street” and the honeymooning dancers, dazed with bootleg brew and sweating through their talcum, bunny-hug around the ship’s saloony ballroom. The Satch, he was good to me, he gave me a bamboo cane and a straw boater with a peppermint headband; and every night from the stand announced: “Ladies and gentlemen, now we’re going to present you one of America’s nice kids, he’s going to do a little tap dance.”  Afterward I passed along the passengers, collecting in my hat nickels and dimes.  This went on all summer, I grew rich and vain; but in October the river roughened, the moon whitened, the customers ended, the boatrides ended, and with them my career.  Six years later, while living at a boarding school from which I wanted to run away, I wrote my former, now famous, benefactor, and said if I came to New York couldn’t he get me a job at the Cotton Club or somewhere?  There was no reply, maybe he never got the letter, it doesn’t matter, I still loved him, still do.

I can add only a few perhaps pedantic asides to this narrative of love scorned, the tale of how the Big Star forgot the Nice Kid.  Louis’ time on Mississippi riverboats began in 1918 but certainly was over long before 1928, with long runs at Chicago nightclubs his main occupation.  ON THE SUNNY SIDE OF THE STREET was not yet written in 1928; Louis might not have received Capote’s letter in 1934 because he was in Paris.

If you were to ask me why Capote would invent such a tale, I could only say that he built his later reputation on such inventions, and was praised for being “careless with the truth.”

Although the editor of the freshman anthology sees “fondness” here, I see a pulling-down of the beloved icon, for Louis was dead and could not rebut a word. Did the child Capote ask Louis for a spot in the show and get turned down?  I cannot say why, but the tone of the piece says as much as the events: the “belligerent” happiness displayed by “the Satch,” “the brown Buddha,” seems to irk the adult Capote as an adult for reasons I cannot discern. Here, to me, is a resentful variety of tap-dancing.

One.  In Jay Preston Allen’s “TRU,” a 1989 Broadway play depicting the aging Capote, Times theater critic Frank Rich wrote, the star, Robert Morse (then famous for his role in HOW TO SUCCEED IN BUSINESS) turned this myth into a musical number:

And when, late in Act II, Tru takes to tapping and strutting to a Louis Armstrong recording of ”The Sunny Side of the Street,” Mr. Morse kicks a loose-limbed leg as high and friskily as he did when joining Bob Fosse’s hoedown for the ”Brotherhood of Man” finale in ”How to Succeed.”