After the film WHIPLASH became popular, people visited JAZZ LIVES to investigate the mythic story of drummer Jo Jones hurling a cymbal across the room at a youthful Charlie Parker at a jam session to stop him in mid-solo.

In 2011, I’d written a post debating the validity of that story.  Would Jo, known as volatile, have treated his cymbals so disrespectfully?  Here is my post, which I now disavow as emotionally valid but factually inaccurate.

I thank Dan Morgenstern yet again, whose comments directed me to Doug Ramsey’s book, JAZZ MATTERS (University of Arkansas Press, 1989) where he had the good sense and good fortune to ask the august string bassist Gene Ramey, who was there, what happened.

The chapter is called “Bass Hit / Gene Ramey,” and Ramsey tells us that Ramey was drinking a grape Nehi, to me a sure sign of authenticity, while telling the tale of meeting the fourteen-year old Parker in 1934, then moving on to the jam session at the Reno Club in 1936. 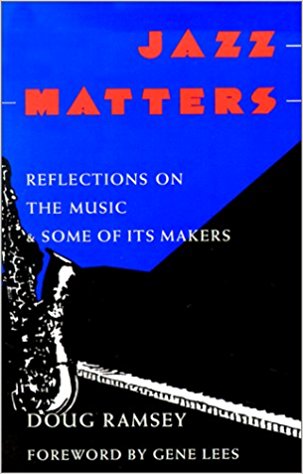 “Nobody remembers what the tune was.  It would be amazing for anybody to remember.  There were dozens of tunes they used to jam. . . . Bird was doing pretty well until he attempted something that took him out of the correct chord sequence, and he couldn’t get back in.  He kept getting lost, and Jo Jones kept hitting the ball of his cymbal like a gong, Major Bowes style — remember on his amateur hour on the radio Bowes hit the gong if somebody wasn’t making it.  Jo kept hitting that cymbal, but he couldn’t get Bird off the stand.  So finally he took the cymbal off and dropped it on the  floor.  When it hit, it skidded a little.  I read one story where Jo was supposed to have thrown the cymbal all the way across the floor.  But he just dropped it at Bird’s feet, and that stopped him. . . . it was comical but still pitiful to see the reaction on Bird’s face.  He was dumbfounded. He came over and I said, ‘Well, Bird, you almost straightened it out.  I remember you made that turn back, but somewhere down in there you got off on the wrong thing.’  We kidded him about it, and he kept telling me, ‘Oh, man, I’ll be back. Don’t worry, I’m comin’ back'” (116-17).

As a tip of the hat to Mr. Ramsey, and a token of gratitude, I suggest you visit his estimable jazz blog, Rifftides.

Posted in "Thanks A Million", Generosities, It's All True, Jazz Titans, Jazz Worth Reading, Pay Attention!, Swing You Cats!, The Heroes Among Us, The Real Thing, The Things We Love