When I am in conversation with someone new and the talk turns to my pursuit of live jazz in New York City, the question will be, “I suppose you go uptown to hear music?  Do you go to . . . ”  And then my questioner will mention some club, usually now-vanished, in what he or she thinks of as “Harlem.”  My answer nearly always causes surprised perplexity, “No, almost every place I frequent is below Fourteenth Street — you know, Greenwich Village.”

Nearly seventy-five years ago (before my time) the Village was a thriving place for hot jazz to flourish, with clubs and venues now legendary but long gone.

One of the quiet heroes of hot piano was Cliff Jackson, who began his career as accompanist to female blues singers but always as a striding player on his own or as the leader of a big band, an in-demand sideman, intermission pianist, and valued soloist.  (And he was married to Maxine Sullivan until his death in 1969.) 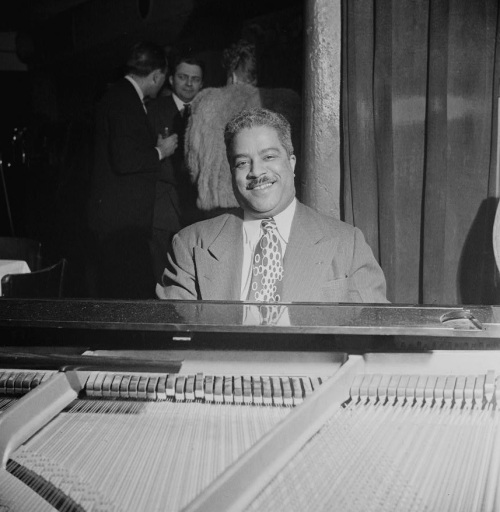 In the last years of the Second World War, several independent record companies (notably Black and White and Disc) took the opportunity to record Jackson, either solo or in bands.  He was a remarkable player, full of charging percussive energy, with singularly strong left-hand patterns (just this week I found out, thanks to the great player / informal historian Herb Gardner, that Jackson was left-handed, which explains a good deal).

Here are three sides from a remarkable and remarkably little-known session for Black and White by the Cliff Jackson Quartet, featuring Pee Wee Russell, Bob Casey, and Jack Parker.  Pee Wee and Casey were long associated with Eddie Condon bands (Eddie featured Cliff in concert and on the television “Floor Show” often).  I am assuming that Jack and Jack “the Bear” Parker, both drummers, are one and the same, recording with Eddie Heywood, Don Byas, Eddie South, Hot Lips Page, Mary Lou Williams, Pete Johnson, Leo Parker, Babs Gonzales — and he’s on Louis’ BECAUSE OF YOU and Nat Cole’s 1946 THE CHRISTMAS SONG as well).

The quartet speaks the common language with grace and eloquence.  We get to hear Cliff at length, and Bob Casey has a fine solo.  Pee Wee seems particularly unfettered: he was the sole horn on sessions that happened once every few years (with Joe Sullivan and Jess Stacy for Commodore) and I think not being placed between trumpet, trombone, and baritone saxophone made for greater freedom. That freedom means great sensitivity on ONE HOUR, and wonderfully abstract phrases on WEARY BLUES.

from Fats to James P. Johnson:

and back in time to Artie Matthews:

Readers who are well-versed or have discographies (some might be both) will note that the YouTube poster has not offered us Cliff’s minor original, QUIET PLEASE.  Yes, there are a number of offerings of this song by Cliff, but they are of a 12″ Black and White session including Bechet, the DeParis brothers, Gene Sedric, Everett Barksdale, Wellman Braud, Eddie Dougherty — a true gathering of individualists. But — before there is wailing and gnashing of teeth from the cognoscenti — a nearly new copy of the quartet’s QUIET PLEASE arrived yesterday from my most recent eBay debauch, and if the stars are in proper alignment, it could emerge on this very site.