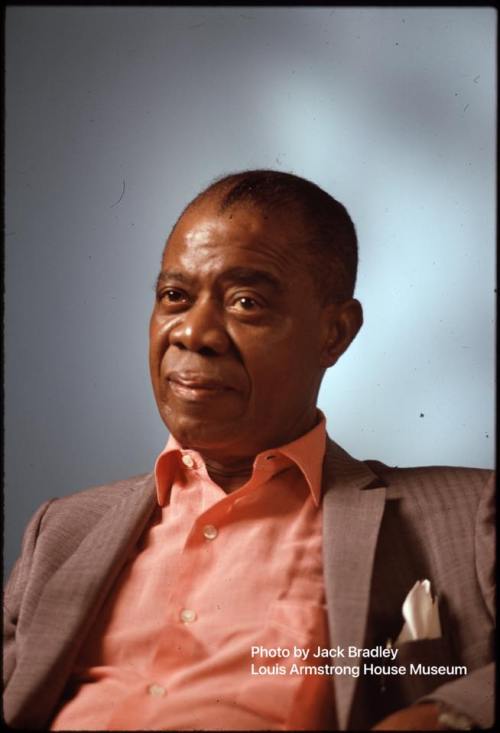 I fell in love with him when I was 9.  He broke my heart when I was 14, and he died when I was 19.  I forgave him for both things, although it took a long time. We lived perhaps twenty miles apart, although I only visited his house after he had been gone for many years.

In the suburban house I grew up in, my mother, Toby, sang along with Barbra Streisand while dusting.  My father, Louis, a short man with black-framed eyeglasses, felt music deeply and brought home unusual records for us.  One was this Louis Armstrong record.  I fell in love. 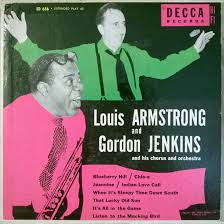 Falling in love is not a rational action: Cupid gives us no choice.

Unlike the glossy women in glossy magazine advertisements I fantasized about, Louis Armstrong was not a conventional Love Object, but a stocky, sweating older man in a tuxedo, glimpsed at intervals on the television screen. But his music spoke to my heart, and now life “Before Louis” seems indistinct.

My fifth-grade classmates chattered happily about the Beatles and I tried to join their party.  But in secret, I retreated to my nest of books and records, staring at the cloth grille of the speaker and the black-and-silver or red labels of the records.  “I found my thrill / On Blueberry Hill.”  “No one to talk to / all by myself / no one to walk with / but I’m happy on the shelf.”

Louis gave himself utterly to the music without self-consciousness.  His trumpet was eloquent, daring.  I delighted in the final chorus of his 1927 record of STRUTTIN’ WITH SOME BARBECUE.  That this was “old music” ignored by my peers only added to the secret pleasure.  When he sang love ballads, his yearning or exultation filled the room, with no shame or embarrassment.

I tried to emulate him.  On a borrowed trumpet, I attempted WHEN THE SAINTS GO MARCHING IN.  The saints, sadly, were unimpressed and stayed put. I was the least accomplished trumpet player in the elementary school band.  The band director suggested I practice more before returning.  I knew what that meant.

My fifth grade teacher asked the class to write about a dream or to create and illustrate a story.  I knew better than to tell Mrs. Blumenthal my dream of the naked woman with the lion face.  But I had no reservations about describing my playing SLEEPY TIME DOWN SOUTH next to Louis on THE ED SULLIVAN SHOW.  I drew the stage, red velvet curtains, myself next to Louis, our horns aloft.  In dreams I had stature, and no one could remove me from the band.

In 1967, when I was fourteen, I read in Newsday that Louis and All-Stars were playing at an auditorium in Hempstead, seven miles away.  Intent, devoted, I made it clear that I had to be there, stating that I would walk there and back in the dark if necessary, so my father accompanied me, protecting his fragile son.

We arrived too early and sat on metal folding chairs, two people in a large hall empty of others.

Louis entered the hall, chatting with his musicians.  “There he is,” my father said.  “Go get his autograph.”

Before the concert, I had agonized over what totem to bring for this moment, the encounter I dreamed of.  What would best show my admiration and adoration?  Frozen in uncertainty, I had taken only a blank index card, which I offered, awestruck and mute, to the man who had no idea how important he was to me.  I had imagined an Olympian figure, radiantly backlit, grinning as he always did onstage.  The real man in front of me seemed small, deflated, even bored.  He signed the card and returned it, saying nothing to me, continuing to speak with his musicians.

Stunned, feeling unworthy, I asked his trombonist to autograph the card, then returned to my seat, invisible. I heard the concert through a loud hum of painful self-criticism.  I kept the story to myself.  I framed the signed card but could not bear to hang it.

Had Louis said to me, “Hey, Pops, you dig my music?” it would have been a gift I would prize forever.  Years later, I part-understood that he had enough to do to play and sing, to get ready to be the man who gave us his essence night after night.  Now I think that expecting him to be telepathic was too much.

Though I had felt stung and ignored in that moment, I continued to follow Louis on television and radio, to collect more records, a devotion that continues to this day.  Each new performance was thrilling; familiar ones revealed new shifts of light: I understood him more as a galactic phenomenon within a human body.

In adolescence, I was compelled to see myself as an outsider, and I silently recreated Louis as a model, uniquely freakish, endearingly individualistic.  I had taken on the expected regalia of the late Sixties, long hair, floral shirt, bell-bottom trousers, but the clothing felt like a uniform I was expected to wear as a foot soldier of Officially Sanctioned Nonconformity.  True subversion was in taking as my hero a man who wiped his sweating face with a handkerchief, who referred to himself as “Satchmo.”  Cheerfully, he seemed to encourage me, “It’s OK to be different.  Have a good time!”  Telling a skeptical classmate that I preferred Louis’ BLACK AND BLUE to anything on the radio was my open radicalism.

Louis died on this date in 1971.  I thought I would have no more opportunities to show my love, nor he to see it.  But after his death I slowly remade myself, moving from Invisible Boy, silent and timid, to Visible Man, wearing my unusual devotion proudly.  A few years later, at jazz concerts, I met other subversives who conversed in code.  “Do you have the German issue with the second take?  Isn’t it wonderful?  I’ll make you a cassette copy.”  “Are you coming next Sunday?  Bobby Hackett will be playing . . . !”  The mocking voices of the uninitiated were loud, “Do you really like that cartoon music?” “Why do you listen to those scratchy records?”  But I felt that our community would shield us.

In my twenties, I grew secure enough to speak to the players I most admired – Ruby Braff and Jo Jones among them – and they spoke to me and saw me.  Now, decades later, I am proud that musicians who revere Louis as I do greet me by name when I come into the club.

Like any satisfying romance, this tale has several endings.

Forty years after that fateful concert, the Armstrong scholar (and angel) Ricky Riccardi told me that Louis was in the middle of a full-fledged bout with pneumonia when I saw him and was not himself.  That fact, and the passage of time, made me feel that it was time to release myself from the old wound.  I have written this piece and offered it in public to forgive Louis for making me invisible.  In doing so, I have also tried to forgive myself for bungling my one chance to show him how much I loved him.  I stood silent in front of him, but I am not silent now.

My dream of playing his music rather than simply listening to it was long dormant but did not die.  A dear friend and inspired trumpet player, Marc Caparone, gave me a beautiful vintage cornet.  When I took it out of its case, I blew the opening phrase of a song Louis had recorded in 1932.  Half of the notes were wrong; my tone was rough, but it was satisfying, a direct link to the red curtains of my fifth-grade dream. In post-retirement life I aspire to be the substitute cornet player in the Elderly Gentleman’s Monday Night Jazz Band, location TBA.  Even to have a cornet in my living room is a kind of fulfillment.

In 2011, nearly fifty years after I fell in love with Louis, I volunteered to be a docent at the Louis Armstrong House Museum in Corona, Queens.  There I could demonstrate my love, my high fidelity, and willingness to serve the ideals he so joyously represented.  From the upstairs suburban bedroom of my childhood, I had arrived at another such room, and for a few months I could act on my love for the man, in his house.  I could show people the bed where Louis and his wife made love, where he died.  Part of the tour had me show visitors photographs.  In one, a short, stocky, brown-skinned man with black-framed glasses smiles broadly in his den.  That man looks remarkably like my father, who shaped my life through music.  Recent photographs show me as continuing the bodily lineage, my eyeglasses the least of it.

By his generous example, Louis Armstrong showed me that my life’s work was to spread joy.  I hear him now, “Though we’re apart, I follow you still.”

Posted in Irreplaceable, It's A Mystery, It's All True, The Real Thing