THE MICROSCOPIC SEPTET FINDS ITSELF IN ASTORIA, NEW YORK, AND WE ARE GRATEFUL: PART ONE (June 6, 2017) 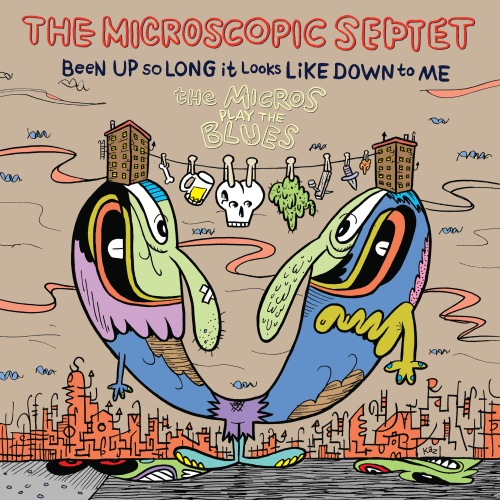 The Microscopic Septet’s most recent CD.

Had you told me, several decades ago, when the Microscopic Septet came, gently ferocious, out of the speakers of my stereo system, that I would be spending a June night in 2017, sitting in front of them with a video camera, I would have said it was cruel to tease me.  But it happened.  And to me, it’s one of the half-dozen accomplishments of this blog-endeavor I’m most proud of.

A brief digression.  I’m coming to the realization that most categorization has nothing to do with the subject.  Of course, at the farmers’ market, it is useful for the purchaser to know what kind of kale or apple or cucumber that unlabeled beauty is, because the purchaser might have certain tastes.  But music is thankfully more expansive than the space between the Ida Red and the Jonagold. So those jazz listeners who wish to debate whether their favorite band plays postmodern-New Orleans-Second Line-funk OR you could call it retro-modern-Creole-trad are encouraged to go outside and play, if the weather is nice.

I confess that I, too, have fallen into the categorizing urge (or is it prison?) now and again, and I even did it for one moment with the Micros, when I whimsically categorized their music to Joel Forrester (to whom I apologize) as “super-intellectual-rhythm and blues,” and the politely pained look that crossed his face as he said, “Well, I don’t know,” was the look you give to a dear friend or relative who has just said something quite surprisingly foolish.  So I gave that up and simply revel in the music: its energy, its surprising twists, its rollicking momentum, its dramatic shapes, its tender musing sadness.  They are too large and luscious to fit in any Facebook group, and that’s something to celebrate.  (Incidentally, I hope any readers who might get scared away by “modernism” give the Micros an attentive few minutes.  They’re not “the Dixielanderini,” but they certainly swing.)

I apologize for the brutality of the image that follows, but when someone asked William Carlos Williams why he didn’t write sonnets, he said, “Forcing twentieth-century America into a sonnet–gosh, how I hate sonnets–is like putting a crab into a square box. You’ve got to cut his legs off to make him fit. When you get through you don’t have a crab anymore.”

The Microscopic Septet plays within forms — the blues, other people’s compositions — but they also extend and stretch those forms, with ingenuity and love, so that no metaphysical animals are harmed.

Here’s the first set of their evening at the Astor Room.  By choice, I sat as close as I could without joining the band, so occasionally the players on either end are bisected or in the dark, but I trust that the closeness of the sound recording makes up for this.

HANG IT ON A LINE:

Thrilling, no?  Also lyrical, pensive, multi-textured, raw, hilarious, moving . . . you can fill in your own praises.

Like Loading...
This entry was posted in "Thanks A Million", Bliss!, Generosities, Hotter Than That, Ideal Places, Irreplaceable, It's A Mystery, It's All True, Jazz Titans, Pay Attention!, Swing You Cats!, That Was Fun!, The Heroes Among Us, The Real Thing, The Things We Love, Wow! and tagged Dave Hofstra, Dave Sewelson, Don Davis, Jazz Lives, Joel Forrester, Michael Steinman, Mike Hashim, Phillip Johnston, Richard Dworkin, The Astor Room, The Microscopic Septet, Thelonious Monk, William Carlos Williams. Bookmark the permalink.

6 responses to “THE MICROSCOPIC SEPTET FINDS ITSELF IN ASTORIA, NEW YORK, AND WE ARE GRATEFUL: PART ONE (June 6, 2017)”