At an age when most of us are playing with imaginary friends or real toys, the lovely musician Enrico Tomasso was playing BASIN STREET BLUES for Louis Armstrong and — in that famous photograph — receiving “The  Kiss Of Joy” from Louis.  So when Marc Caparone refers to Rico as “anointed,” he speaks the truth.

August 9, 2017, was a very special day for me, for Enrico and his family — his wife Debbie and daughter Analucia — thanks to Ricky Riccardi, the Ambassador of Louis and Louisness.  For it was on that day that Rico came to the Louis Armstrong Archives at Queens College, my idea of a holy place, to sit among the wonders.  I was there, with my camera, and recorded what happened, for all to see.  The opening videos of this segment are narrative: Rico, Ricky, and family, looking at Louis’ scrapbooks and photographs.  But Rico has marvelous stories to tell: this isn’t “history”: it’s very much alive.

Then, going back a bit, stories of Louis in England both in 1933 and 1968.  You’ll want to hear what Rico’s mother told him, and that Louis called Rico, “my little trumpet player”:

Looking at one of Louis’ scrapbooks — and there’s a great punchline at 4:25:

And what I find very touching, the scrapbook that Lucille Armstrong kept of letters and notes of condolences sent to her after Louis’ death.  I asked Ricky to read out the note from Spike Mackintosh, which is touching beyond words:

“Now here comes the beautiful part”: Enrico Tomasso playing Louis’ trumpets.  Much of the memories above have shown us the grown man reliving parts of his childhood, completely dear and alive — but now we move into the much more vivid present, even though Rico says that he has “holiday chops.”

Here are excerpts from DINAH, STRUTTIN’ WITH SOME BARBECUE, I COVER THE WATERFRONT, SLEEPY TIME DOWN SOUTH, POTATO HEAD BLUES, a story Bob Wilber told about the 1947 Town Hall Concert, a cadenza, and I USED TO LOVE YOU — which the young Rico learned and sent on a tape to Louis:

And a little extra taste:

When someone, as a loving gesture, says, “Have a blessed day,” I have a good sense of where that utterance is coming from.  I usually say, “You too!  I already am.”  But August 9, 2017, with Enrico, Ricky, Analucia, and Debbie, was an especially blessed day.  The kiss of joy that Louis gave Rico in 1968 — Rico has returned to us for decades.  And this was another glowing unrestrained example of love in the form of sound, from Louis, from Rico: a great gift that warms us like sunshine.

And there will be more music from Rico and friends to come. 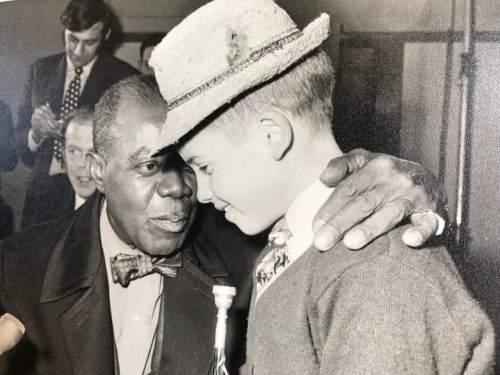 Rico and Louis at Heathrow Airport, 1970.