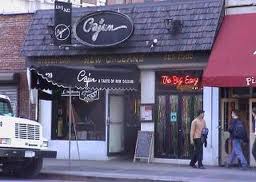 I never know what might surface in this aging-boy’s den of things that I call my apartment, but often it is pleasing and surprising. Some weeks back, I posted the first segment of an evening of jazz, hot and sweet, performed at The Cajun, long gone, by the Red Onion Jazz Band in its summer incarnation, which means that many of the “regular” members were absent, although the “subs” were superb. You can see it and read about it all here.  (And you can admire the still photograph of the ROJB just below.)

Overseen by Arlene Lichterman and the late Herb Maslin, The Cajun was a novel in itself: ask anyone who went there or made music there.  But that’s another, unwritten blog. 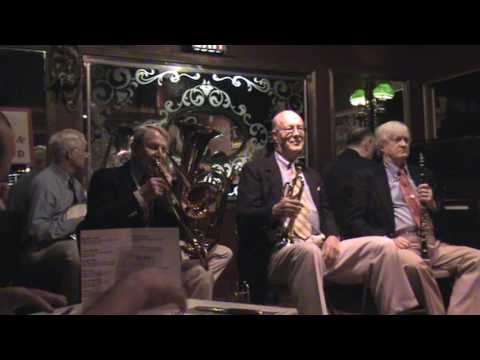 I reprint Dick Dreiwitz’s essay on that night, because it is so good and so apt:

A Band of Substitutes

Summers for the traditional, classic jazz bands (some called their style Dixieland), those bands fortunate enough to have steady work (even if it was only one night a week), summers came and delivered even more problems than the usual problems during the rest of the year. Vacations, tours, and travel caused individual, regular band members to be absent, so qualified substitutes had to be found and hired.  Such was the case with the Red Onion Jazz Band’s (ROJB) regular Saturday night gig at the Cajun Restaurant in New York City on 8th Avenue at 16th Street one night during the summer of 2006.

Leader and drummer Bob Thompson had gone to his vacation home in Martha’s Vineyard and clarinetist Joe Licari was lured away for a more lucrative single engagement that no player in his right mind would turn down.  The other regular band members away that night were: Simon Wettenhall, trumpet; Larry Weiss, piano; Rich Lieberson, banjo/guitar, and Bob Sacchi, tuba.  As I remember, the only regulars were Veronica Washam, our singer, and myself on trombone. Truly, it was what John Gill would have called “An Emergency Band.”

Curiously, as luck would have it, two substitutes on the night of the taping were John Bucher, cornet, and Hank Ross, piano, both regular members of the ROJB from the late 1950’s through the 1970’s when the band and its musical style were at a zenith of its popularity.  This activity included travel to play at jazz festivals, intervals of steady work in the New York metropolitan area at such places as Child’s Paramount in Times Square and Park 100, and a solo, sold out concert at Town Hall. Alan Cary, banjo, and Barbara Dreiwitz, tuba, both long time friends and substitutes with the band, filled out the personnel except for clarinetist Sam Parkins, on this occasion playing his new Albert System instrument in public for the first time.

Since that summer, over eleven years ago, the Cajun Restaurant has closed its doors, Bob Thompson, Hank Ross, and Sam Parkins have passed on and the Red Onion Jazz Band is little more than a memory, a few old LP records, a couple of CD’s, and some photos.

Here, the songs are CHINATOWN (vocal Sam Parkins) / WRAP YOUR TROUBLES IN DREAMS (Ronnie Washam) / FOUR OR FIVE TIMES (with ensemble commentary).  And in the name of accuracy, that’s someone else ordering “another glass of champagne.”  Drinking champagne and videoing do not mix.

I’ve edited these segments a bit, so here’s one anecdote that got cut.  At the end of this set, while the band is packing up, one of the patrons mechanically asks the band for “one more,” to which one of the musicians quietly says, “Three and a half hours is enough.” I agree with the tired, underpaid artists, but I wish I had another twenty hours of this band on video.  I treasure what did get captured.