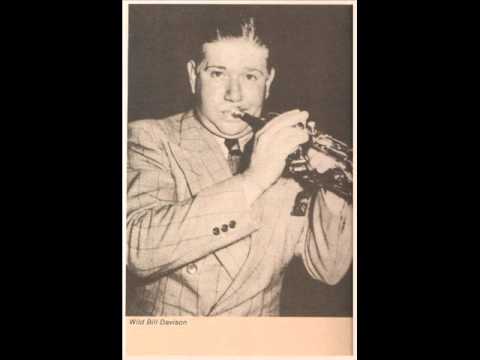 Ruby Braff, who could be ungenerous in his quick assessments of fellow musicians, said of Wild Bill Davison, “He had drama,” and he was right.  Even at the last stages of Bill’s life, when he was working his way through one time-tested solo after another, he was never lukewarm.  And it wasn’t simply a matter of volume or tempo, but an intensity that burned through the most romantic ballad he played.  And he inspired everyone around him.  I saw this in person several times in New York City in the Seventies, and those who saw Bill will agree.

Here’s the set.  Make sure your seat belt is securely fastened.  Have your fire extinguisher accessible.

I CAN’T BELIEVE THAT YOU’RE IN LOVE WITH ME:

SHE’S FUNNY THAT WAY, a ballad Bill loved to burn through:

A Commodore classic from the ODJB book, FIDGETY FEET:

A dangerously hot BEALE STREET BLUES (how I wish George Avakian, the guiding genius of so much hot music, could hear this):

Finally, a nearly violent THAT’S A-PLENTY (catch the trading of phrases among Randy, Andy, and Dan):

After Wild Bill and the band had burned through their first number, he would often take the microphone and leer at the audience, a gum-chewing W.C. Fields with a cornet, “I see that you like dinner music.”  Hal and PRETTY WILD make sure that dinner is always hot and ready.