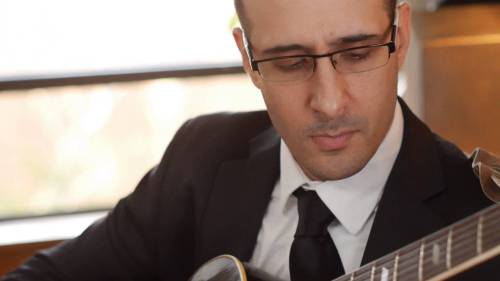 makes up a musical organization much more expansive than a duo.

But who knew that such glorious music flourished underground? Most Tuesdays, trombonist Mariel Bildsten leads a small group — quite compact, because it’s a duo: here she is with guitarist Greg Ruggiero, both playing splendidly in “Turnstyle,” a subway-mall attached to the “A” at Columbus Circle in New York City, on October 17, 2017.

Greg I’ve known and admired for some time because of his beautiful playing with, among others, Michael Kanan, Neal Miner, and Sam Taylor.  But I first encountered Mariel at Turnstyle this autumn, and was delighted.

A small digression: here you can learn about all the eateries at Turnstyle, and get some basic orientation about how to get there.  It’s easier the second time.

These are easy to listen to, right now.

Here is Greg’s website, and here is Mariel’s.  And — for more up-to-date news — find them on Facebook here (Greg) and here (Mariel).

When Dostoevsky wrote NOTES FROM UNDERGROUND, he didn’t have anything quite so uplifting in mind.

Like Loading...
This entry was posted in "Thanks A Million", Bliss!, Hotter Than That, Ideal Places, It's All True, Jazz Titans, Pay Attention!, Swing You Cats!, That Was Fun!, The Heroes Among Us, The Real Thing, The Things We Love and tagged Dostoevsky, Greg Ruggiero, Jazz Lives, Mariel Bildsten, Michael Kanan, Michael Steinman, Neal Miner, Turnstyle. Bookmark the permalink.

One response to “THEY’RE SWELL: MARIEL BILDSTEN and GREG RUGGIERO at TURNSTYLE, October 17, 2017”