SWINGING FOR THE KID: HAL SMITH’S “ON THE LEVEE JAZZ BAND”

Edward Ory — that’s the Kid to those of us who admire and keep his name and music alive — is a fabled figure.  His 1925-28 Chicago recordings with Louis Armstrong, King Oliver, Luis Russell, Johnny Dodds, Lil Hardin, George Mitchell, Jelly Roll Morton, Ma Rainey, even Tiny Parham are bedrock masterpieces of the pre-World War Two jazz canon, and many bands celebrate them.

But the California climate — whether you consider the ground-breaking 1922 recordings or the evidence of Ory’s second career — must have agreed with him, because the music he made from 1943 on, while less celebrated, is as gratifying, to some even more so.  In the middle Forties, Ory’s band was not a formulaic “trad” group; like Bunk Johnson, he played popular songs.  Rather than have a two-beat rhythm section with banjo, tuba, and a pianist playing their impressions of an older style, the Ory band carried a rhythm guitarist, a string bassist who mized 2/4 and 4/4,  and often had the elegantly down-home pianist Don Ewell keeping things light, bright, and swinging.  At its most gliding, the Ory band suggested a fraternal meeting of New Orleanians still in beautiful form and a swing rhythm section with hints of Basie’s . . . quite a lovely blend. 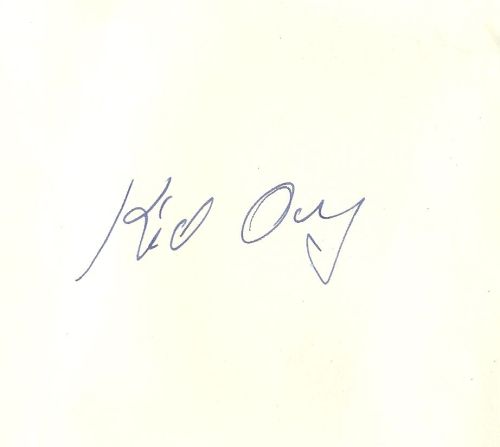 Ory’s music of the Forties and Fifties  has been well-documented on disc, because the band was caught live on radio broadcasts, and, later, for Norman Granz, but I think many lovers of “traditional jazz” associated him with a rough-hewn trombone style over their idea of “traditional” rhythms.  That is, until the superb drummer and jazz scholar Hal Smith assembled a group of congenial players for his new “On the Levee” Jazz Band, its title referring to a San Francisco club owned by Ory, where he and his band played from 1957-61.

I asked Hal about his first awareness of this period of Ory’s music, and he told me, Back when I bought my first Lu Watters record, the owner of the record store handed me the Watters LP, looked at the label and said “Oh — ‘Good Time Jazz.’ I have another Good Time Jazz record here that someone ordered, but never came in to pick up.” The LP she offered me was “Kid Ory’s Creole Jazz Band, 1954.” I gladly accepted it, and from the first hearing the combination of Ory’s tailgate trombone and the swinging rhythm section (Minor Hall, Ed Garland and Don Ewell in particular) became some of my favorite sounds in Jazz.

Hal later told me, Based on our performances in New Orleans and Pensacola, I think the On The Levee group most closely resembles the GOOD TIME JAZZ ensembles, circa 1953 – 1955. A lot of that is due to Kris’ admiration for Ewell, and Josh Gouzy’s Ed Garland-inspired bass. (Ory’s sound changed considerably after Ewell and Garland left, and even more in the late ’50s and early ’60s).

The band has already played gigs in New Orleans and in Pensacola, Florida, with Clint Baker nobly filling the Ory role; Ben Polcer, trumpet; Joe Goldberg, clarinet; Kris Tokarski, piano; Alex Belhaj, guitar; Joshua Gouzy, string bass; Hal Smith, drums.  And early in 2018 they will again play in New Orleans . . . and will appear at the San Diego Jazz Fest in November.  I am sure that there will be many other opportunities to hail this group in between.

For now, here is the band’s website, and here are a few videos.  Many more are on YouTube, and the site has a whole cloud of audio-only performances, more than enough to roll up the rugs (if anyone does that) and invite the neighbors over for swinging cheer.

Many bands are playing this repertoire, but few are doing it in this fervent;y swinging way.  And since the club no longer exists on the Embarcadero — 987 would be part of the Ferry Plaza Maketplace — we should embrace this new band, so nicely keeping a jazz legacy vibrantly alive.

Posted in "Thanks A Million", Bliss!, Hotter Than That, It's All True, Jazz Titans, Pay Attention!, Swing You Cats!, That Was Fun!, The Heroes Among Us, The Real Thing, The Things We Love