EXPERIENCING BIG BAND JAZZ is a brand-new and admirable book by a composer, arranger, historian, archivist of all kinds of American music, vernacular and formally composed.  I’ve never met Jeff, but I have had several years to admire his expertise: I’ve read his postings to an online jazz research group with pleasure.  Sultanof isn’t interested in self-absorbed preening or  proving ideological points for ideology’s sake; he’s interested in tangible evidence and following its implications.  And when he doesn’t know, he says so, which is honest and rare.  This diligence and rigor is at the heart of the book.

Incidentally, a low bow to whomever conceived the cover — a loose Ellington assemblage that, unlike the expected choice, fellows in dinner jackets or tuxedos behind floor music stands, did not say NOSTALGIA and thus distance prospective readers.  And the old-timers in the imagined bookstore (people of my ilk and generation) warm to pictures of Ray Nance, Sonny Greer, Rex Stewart.

Now, if this book had been proposed in the Sixties, no publisher would have taken it — no reflection on the author — because big band jazz was a charmingly ubiquitous part of everyone’s culture and needed little explication.  Fifty years ago, I could see in person Ellington, Basie, Goodman, Herman, Calloway, Barnet, James, Thad Jones-Mel Lewis, Benny Carter’s Swing Masters, Hampton, Jacquet, Rich, Nat Pierce-Frank Capp, Lombardo, Lester Lanin, Peter Duchin, Dorsey and Miller ghost bands, and three dozen others.  Every television  variety program had a big band, from Doc Severinsen to Mort Lindsey to Ray Bloch and Sammy Spear.  A Sinatra or Peggy Lee concert . . . you’re beginning to sense the connection.  FM radio played modern big bands; college radio stations allowed scholars who were and are friends to have “Swing Years” programs.

Parallel to this late flowering in music, there were books on the phenomenon.  Affectionate dictionaries of big bands by Albert McCarthy and George Simon, “Remember When” volumes of nostalgic reminiscences by listeners and musicians alike, with the subtext “This is the music that helped your parents and grandparents get born, and wasn’t it wonderful?”and analytical books by Chilton, Walter C. Allen, Schuller, and others.

Perhaps we didn’t need Sultanof’s book then.  We surely do now.

If you don’t believe me, ask anyone under forty who Glenn Miller was, or Bennie Moten.  I have a sour fantasy of standing on a street in Manhattan with a sign saying, “WHO WAS BENNIE MOTEN?  ANSWER CORRECTLY AND WIN A PRIZE.”  How many people would look up from their iPhones?  (Incidentally, HBO turned down my pilot for an alternate-universe series where Berigan and Blanton live on.)  Go to a Jazz Studies program and ask the students sitting in plastic chairs whether they prefer the Henderson band pre-Louis, post-Louis, or in Chicago 1936?  Or “Name me three big-band drummers who aren’t Buddy Rich.  Three alto saxophonists playing before Charlie Parker.”

In the void that exists when a large piece of communal culture has been made disposable, Sultanof is not only a historian but a rescuer.  And he doesn’t gush but this is not a dry academic book: his writing is not only clear and factual but quietly affectionate.  Somehow knowing that he probably did not lose his virginity to the strains of IN THE MOOD makes his work even more meaningful. 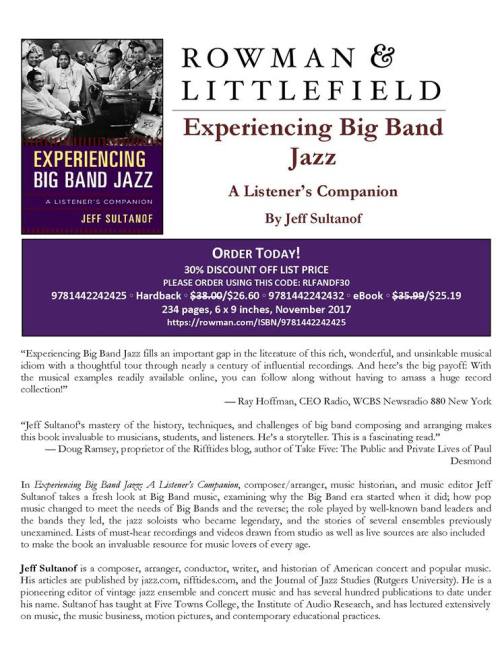 EXPERIENCING BIG BAND JAZZ is presented for an audience that is unaware of the traditions, and that is in the main correct, because so few know when the four-person rhythm section became three; why the big band jazz scene changed in the Forties, and so on.  But it’s not a book in primer type, and it’s not sentimental: we don’t learn about Louis and his trout sandwich, or the deaths of David Goodman, Sonny Berman, or Dave Tough.  There are no maps of famous ballrooms and dance halls, no stories of Buddy Rich ranting, no stories of life on the band bus.  Sultanof’s focus is plainly on the music.  And he’s done a heroic job of making a huge musical landscape visible.

But the book is so plain-looking (I don’t mean the nice cover) that it might take readers time to stop underestimating it.

Here’s a very brief overview.  The center of the book — more than a hundred and fifty pages — is a chronological survey of selected recordings from MEMPHIS BLUES (1919, Handy) to THE PRESIDENTIAL SUITE: EIGHT VARIATIONS ON FREEDOM (2014, Ted Nash). Each entry offers a cogent thumbnail sketch of the bandleader / orchestra / performance — with some quirky facts inserted, like crushed red pepper.  And there is no hidden ideological leaning: the US gets the main portion, but the Europeans come in nicely; 4/4 is the meter of choice but not always.

Here’s a sample of names from the middle of the book (pages 61-72) — admittedly, my turf: Glenn Miller – Bill Finegan; Jay McShann – Charlie Parker; Harlan Leonard – Tadd Dameron; Cab Calloway – Dizzy Gillespie; Benny Carter; Miller – Eddie Durham – “Chummy” MacGregor; Artie Shaw – Sam Donahue; Charlie Barnet – Billy Moore; Billy Eckstine – Budd Johnson; Stan Kenton – Buddy Baker.  Those who know will recognize that not only is Sultanof speaking of the leader, the composer, the soloists, but also the arranger . . . and a particular version’s connections (echoes and liftings as well) to other recordings and performances.  Devotees might say, “Why did he pick that version, that song?  Why do the Canapes have only two performances?” but that’s what connoisseurs do, muttering in the background.

Back to the experience of reading this section.  First, one is not compelled to follow in chronological order.  I would hope that even a novice would know a few names and start with the recognized heroes.

With a pleasing awareness of the century we live in, Sultanof has picked performances currently available on YouTube — rather than saying “Decca 374,” which for all but a handful, is inaccessible and thus frustrating data.  I can’t overemphasize the sly brilliance of this scheme.  First, no young student has to buy one of those things the old folks dote on, compact discs.  (He’s promised to update links as they become defunct on YouTube.)  It is possible to imagine a whole group of reader-listeners accessing this book on their phones — one of the few instances I would be happy to see someone with earbuds, rocking and smiling.

Also, I am sure he understands the wandering ways of YouTube and its endless supply of rabbit-holes. Remember the last time you went on YouTube to find some artist or performance and found the right-hand column of thumbnails beckoning?  Looking for one particular Charlie Parker performance?  Pack a lunch, because you’ll find it hard to get away in ten or even ninety minutes.  The cry, “Honey, I’ll do that thing you wanted me to do right after I watch just one more thing!” is so common, not limited to big band jazz-obsessions.

He’s also created a Facebook group for the book, where he promises to “supply additional tracks to supplement the book, answer questions, and promote discussion about the materials covered. There is a teacher guide for the book as well, and support information for interested parties who would use the book as a text for a class.”  That is using current media with great intelligence.

On a personal note: I come from a different century, which doesn’t upset me, because there were many more opportunities for friendly community than most have now.  When I was in my late teens, I had a small circle of friends who loved the same music, and we would go to each other’s houses (sometimes the visit would turn into dinner cooked by the friend’s mother) and listen closely to the newest or oldest record that was giving intense pleasure, commenting chorally and individually to what we heard.  “Can you play that again?  Listen to what Page does in that phrase.  Listen to how Ben charges in on his solo.  Listen to what Hackett does at the end of the chorus,” and so on.  We were already worshipers, and we helped each other know and notice more.

Having Sultanoff’s concise, friendly summaries is like going through the potentially cold museum of only-slightly-understood art with a very wise but never obtrusive guide at your arm, murmuring about what one might see if one looked closely.  The listening experience is instantly made richer.

It’s a valuable book for many different audiences; it’s very well done, and it fills a void that many may not have recognized existed.  Thank you, Jeff Sultanof!

Here is the publisher’s official link to purchase the book (hardcover or e-book) but please note the sale / discount prices above.  I don’t know when this offer expires, so get to it in a nice swinging 4 /4.

I want to hear Jazz Studies students humming Benny Carter reed-section variations or becoming Don Redman’s trombone section on the street as soon as the book is bought and adopted widely . . . and the weather improves.

Like Loading...
This entry was posted in "Thanks A Million", Bliss!, Generosities, Irreplaceable, It's All True, Jazz Titans, Jazz Worth Reading, Mmmmmmmmmmmmm!, Pay Attention!, Swing You Cats!, That Was Fun!, The Heroes Among Us, The Real Thing, The Things We Love, Wow! and tagged EXPERIENCING BIG BAND JAZZ, Jazz Lives, Jeff Sultanof, Michael Steinman, Richard M. Sudhalter. Bookmark the permalink.

One response to “EXPERIENCING BIG BAND JAZZ, by JEFF SULTANOF (Rowman and Littlefield)”