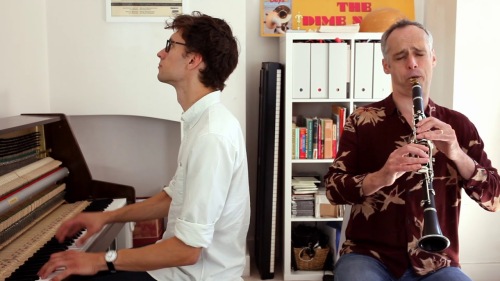 It’s one thing to have a bright idea, another to give that idea tangible shape.  But consistent unflagging creativity is dazzling.  The Complete Morton Project — Andrew Oliver, piano, and David Horniblow, reeds, with occasional doubling and special guests — is a wonderful embodiment of all the principles above.

I have trouble keeping up with their weekly gifts, but here is another sustained offering of pleasure. 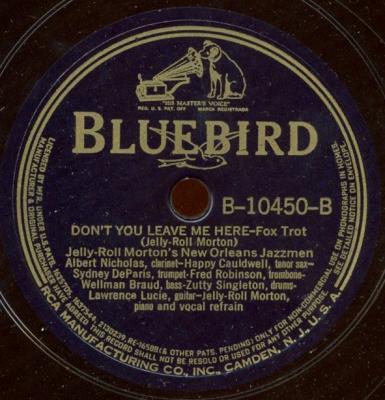 DON’T YOU LEAVE ME HERE was recorded in Morton’s last flourish, although I suspect he had had the composition in his repertoire for years.  With its melancholy title, it’s always a pleasing shock to hear it treated in this jauntily ambling fashion:

and a Morton line that used to be played more often — famous versions with Louis, Bechet, Red, Johnny Dodds — WILD MAN BLUES, with a delicious conversation-in-breaks created by Andrew and David:

GAN JAM (or GANJAM) was never recorded by Jelly, but was envisioned as an orchestral composition for a big band.  James Dapogny reimgined it as it might have been, and here the CMP envisions it as a duet — full of what might have been called “Oriental” touches but to our ears might simply be extended harmonies, quite fascinating.  I’d bet that someone hearing this for the first time would not think Morton its composer.  You can read Andrew’s observations on both tune and performance here:

Finally, a title that would not apply to what Andrew and David have been giving us so generously, THAT’LL NEVER DO (did Morton say that to one of his musicians at a rehearsal or run-through?).

I see a chorus line in my mind, high-kicking:

Posted in "Thanks A Million", Bliss!, Generosities, Hotter Than That, Ideal Places, It's All True, Jazz Titans, Mmmmmmmmmmmmm!, Pay Attention!, Swing You Cats!, That Was Fun!, The Heroes Among Us, The Real Thing, The Things We Love, Wow!