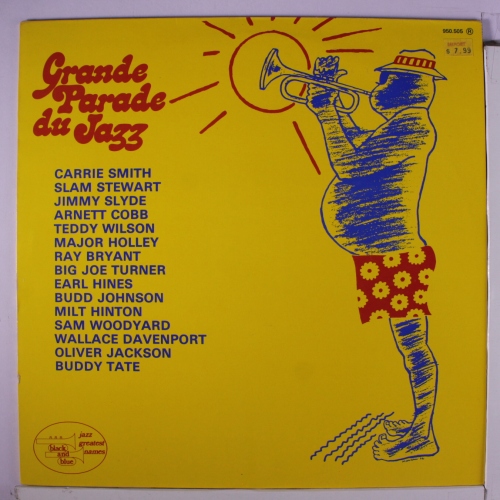 “La grande parade du jazz” is what the people in charge of the Nice Jazz Festival called it in the last half of the 1970s.  And that it was for sure.  Here, through the good offices of the scholar Franz Hoffmann, is a nearly ten-minute SWEET GEORGIA BROWN with sixteen of the great players (Bob Wilber and Marty Grosz, still happily with us) participating.

Twelve horns in the front line might mean chaos, but there is expert, funny traffic direction here by experienced musicians who knew (this was the last performance of a set) that allowing everyone to play three choruses could extend the performance well past plausibility.  And SWEET GEORGIA BROWN is so familiar that no one could mess up the chords on the bridge.  And although the director / cinematographer on some of these Nice videos made them hard to watch by cutting from one angle to another every few seconds, here the editing is much more sedate and pleasing.

The performance is full of sweet little touches — the affectionate respect these musicians had for each other and the idiom.  After an ensmble where — even amidst all the possibility for clamor — Bobby Hackett is audibly leading, with mutters from Vic Dickenson, which then turns into a very characteristic propulsive Art Hodes solo, all his traits and signatures beautifully intact.  Watch Barney Bigard’s face as Maxim Saury plays a patented Bigard motive, how amused and pleased he is with the younger man’s tribute, and how he (Barney, that is) pays close attention afterwards.  (For what it’s worth, Herb Hall and Barney sound so sweetly demure after Saury.)  After some inaudible asides, Alain Bouchet (brave man!) trades phrases with a very impressive Hackett, then, before any kind of disorder can take over, Vic takes control over the trombone section, with Willcox and Hubble having fun playing at being Vic.  A conversation between Dick Sudhalter and Pee Wee Erwin reveals two concise lyricists; Bob Wilber, so durable and so profound, soars through his choruses (notice Wingy trying to break in after the first).  Wingy takes his turn in opposition to a beautifully-charged Hackett, with supporting riffs coming in for the second chorus (Hackett quotes WITH PLENTY OF MONEY AND YOU, so gorgeously) before the whole ensemble charges for the exit, Moustache commenting underneath, his four-bar break hinting at a deep study of Cliff Leeman:

Almost ten minutes of bliss, with no collisions and no train wrecks.  And if you care to, on the third or fourth viewing, watch the musicians themselves closely — the ones who aren’t playing, as they smile and silently urge their friends, colleagues, and heroes on.  Their love is tangible as well as audible.

It’s a cliche to write that “Giants walked the earth,” but this summer performance proves the truism true.  And one of the most dear of the giants — never in stature — the blessed Bobby Hackett — wouldn’t live another full  year.  Oh, what we lost.

For more from Franz Hoffmann, and he has marvels, visit his YouTube channel.