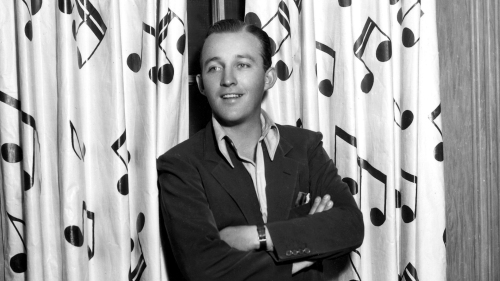 Given the collective memory loss, I am sure that few people under fifty automatically know who Bing Crosby is, which is a pity.  Their loss.  I fell in love with the sound of his voice when I was a child (I even came to appreciate the distorted renditions of WHITE CHRISTMAS played through loudspeakers throughout December) and my reverence for his work has only grown with time.  Add to that his delight in working with jazz players, his insouciant yet hilariously erudite film persona, and you have an Icon.  By the way, the second volume of Gary Giddins’ Bing tome is supposed to be published before the end of 2019: something to read while the days grow short.

Incidentally, the question of “Is X a jazz singer?” is not terribly interesting to me.  “Does it sound good? Does it move the listener?  Is it artfully done?” are the questions that do.

Here’s what he sounded like three days before his death: lovely, apparently casual, full of feeling:

and some forty years later, a recording that the fine singer Dawn Lambeth told me about, very loose, with the guitarist Perry Botkin the only accompaniment — a splendid song, taken in a light-hearted,  jovial way:

You may prefer other singers, but he remains inimitable.

Posted in "Thanks A Million", Bliss!, Generosities, Irreplaceable, Jazz Titans, Mmmmmmmmmmmmm!, Pay Attention!, Swing You Cats!, That Was Fun!, The Heroes Among Us, The Real Thing, The Things We Love, Wow!