I’ve come to think that one goal is to live one’s life whole-heartedly, generously, singularly, so that when one dies — moving to another neighborhood in the cosmos — one is missed.  Or, there is a hole shaped like you in the world that people notice.  “I wish Susie were here to have a piece of this pie.  I wish I could give Liz just one more hug.” and so on.

The alto saxophonist and sometime clarinetist Chuck Wilson, who died on October 16, accomplished that goal and more. 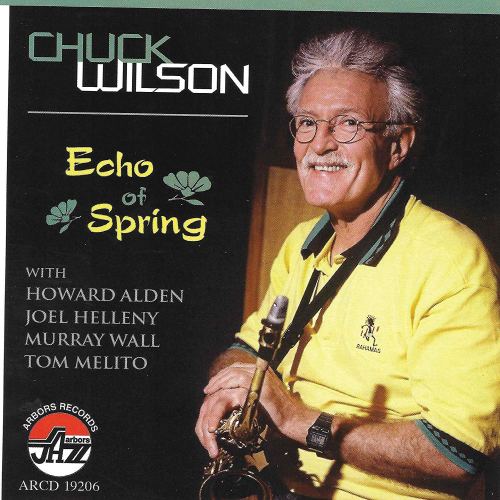 A CD worth searching for — a beauty in so many ways.

I saw and heard Chuck intermittently from 2004 to 2016, in Jazz at Chautauqua with the Alden-Barrett Quartet, and in various New York groups, including Vince Giordano and the Nighthawks, the EarRegulars, with Corin Stiggall and Carol Morgan, but I can’t say I knew him well.  So I will leave the anecdotes to others, and the outline of his biography also.  I did observe him at close range as an unusual man and player: part shy boy, part boisterous side-of-the-mouth wisecracker and social critic.  His playing was just so splendid, although I think he rarely wanted to step forward and lead — any sax section or any band that had Chuck in it immediately sounded so much better.  His sound was lovely.  And he understood both his horn and the music.

Chuck was initially very wary of my video camera (and perhaps also of the civilian who operated it) but eventually he 1) figured that I wasn’t out to embarrass him but to praise him, or 2) I wouldn’t go away so there was no use telling me to do so.  So I have a few — too few! — performance videos of him which I will share again with you — so that you who knew Chuck can have the bittersweet joy of having him in action, and that those who never heard him can regret the omission.

Here he is with Terry Waldo’s Gotham City Band — for that August 2016 afternoon, Chuck, Terry, Jim Fryer, Jay Leonhart, Jay Lepley, playing DIGA DIGA DOO in what I think of as a Fifty-Second Street manner:

And here, at The Ear Inn on May 30, 2010 with Danny Tobias, James Chirillo, Pat O’Leary, for a easy groovy EXACTLY LIKE YOU:

I wish there had been more opportunities to capture Chuck live: many things got in the way, but you can savor another large handful of performances from these gigs here and here.

I also hope that Chuck knew how much he was admired and loved.  And is.