Some children get upset if the green beans and mashed potato on their plate are touching.  Some listeners separate “their” music into schools and styles, existing in the same space but kept at a safe distance.  I just read a review of a festival where the writer delineated “trad” and “not trad at all,” which to me is a shame.  Musicians know that they can play any repertoire in inventive ways, move in and out of rigidly defined “traditions” and create lasting satisfying art. 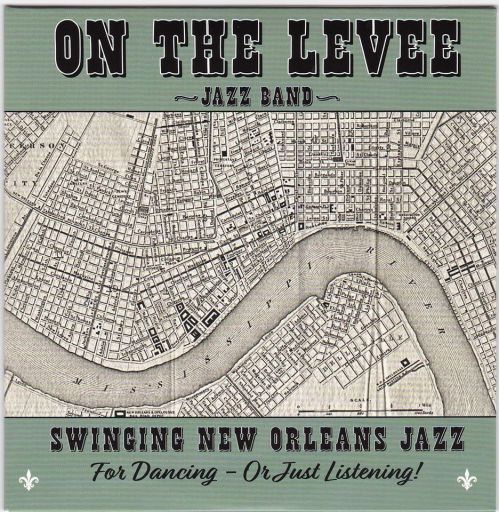 Here’s a shining example, the ON THE LEVEE JAZZ BAND (that’s the cover of their debut CD above).  I’ve posted music from another performance here.  To me, their joyous essence is a mixing of “genres”: soloists who know Blakeney, Darnell Howard, Don Ewell, but who are also aware of Buck Clayton, Ed Hall, Vic Dickenson, Steve Jordan, Walter Page, and Jo Jones.  The secret is a flowing 4/4 — music for dancing as well as listening.

A problem with transporting a precious substance:

Hey, Dad — you coming back?

Some early Ellington with a debt to Joe Oliver:

Gus Mueller, if I recall, said decades after the fact that the title had no hidden meaning — they just liked the sound:

This one always comes in handy:

A song for parents of newborns or anyone embracing transformations:

For further announcements and more good news, visit here.  I’m pleased to say I will see them three times in 2019: the Redwood Coast Music Festival, the Evergreen Jazz Festival, and the San Diego Jazz Fest.  You come, too.

Posted in "Thanks A Million", Bliss!, Generosities, Hotter Than That, Ideal Places, It's All True, Jazz Titans, Mmmmmmmmmmmmm!, Pay Attention!, Swing You Cats!, That Was Fun!, The Heroes Among Us, The Real Thing, The Things We Love, Wow!