I’ve known and admired the saxophonist-composer Lena Bloch for almost a decade now, and respect her musical integrity.

I’ve been very selective about using JAZZ LIVES as a platform to advertise Kickstarter projects, but Lena’s new CD — as of yet unrecorded — with her FEATHERY quartet, Cameron Brown, Billy Mintz, and Russ Lossing, is eminently worthy of your consideration. 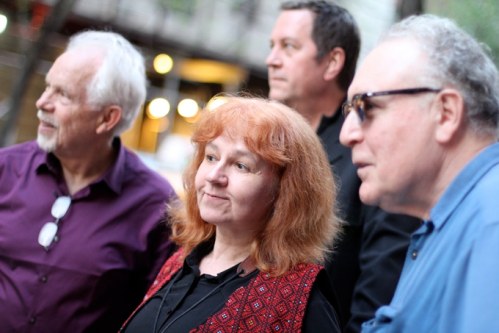 FEATHERY is planning a new CD, which will be called ROSE OF LIFTA.  Here’s what Lena has to say about the project:

The idea of this project came to my mind when I was reading the poem by Iman Annab “Climbing Rose Of Lifta,” about the pain of separation from one’s homeland, intense yearning and strong hope of return. Deeply moved by this poem, I wrote a piece “Rose Of Lifta” and later on several other compositions, dedicated to those who had to leave their homes and loved ones, becoming refugees and expatriates. My ensemble colleagues understood me emotionally and musically, and we added several more pieces written by Russ Lossing. It will be an album of a string of compositions, different in mood and color, but unified by a continuous narrative of longing for home. Our approach, the ways to interpret the compositions developed organically during our performances, and after one year of working on the material, we now ready to record it and simply can’t wait! Our recording will again be done in one room, without headphones or booths, The sound engineer that has been working with us is Paul Wickliffe (Skyline Productions), whose work Dan Morgenstern describes as the following: “There is a fifth member of this group, Paul Wickliffe, who recorded, mixed and mastered the music–and the term “mastered” has seldom been more appropriate. The special sound of this group has been perfectly captured, each voice crystal clear, yet reflecting the music’s collective essence.” We are very thrilled to be working with Paul again, he is a wizard who can create the most intimate listening experience.

As JAZZ LIVES readers know, producing a CD is costly.  There are almost no record companies in existence that can bankroll musicians, so most if not all musicians are forced to do it themselves.  So this project has spawned a Kickstarter page — FEATHERY needs to raise $8000 in the next three weeks, more or less, to create this CD.  I’ve contributed, by the way.  And I hope you will look into this worthy endeavor.

Posted in Generosities, It's All True, Jazz Worth Reading, Pay Attention!, The Heroes Among Us, The Real Thing

Update: I am reposting this because yesterday, April 15, 2020, Lee Konitz moved into spirit at the clock-age of 92, from pneumonia resulting from COVID-19. There are already many tributes, but I thought it wisest to remind people of Dan’s.

Here’s the first part of Dan’s recollections of Sonny Stitt, which include an ashtray and a bottle of vodka, not at the same time or place:

More about Sonny and the wonderful trumpeter / arranger Willie Cook:

In these interviews, I’ve concentrated primarily on the figures who have moved on to other neighborhoods, but Dan and I both wanted to shine a light on the remarkable Lee Konitz:

More to come, including Dan’s recollections of a trio of wondrous pianists, Martial Solal, Eddie Costa, and Willie “the Lion” Smith.  And Dan and I had another very rewarding session three days ago . . . with more to come this spring.