FOR FATHER’S DAY: “THE JAZZ APPLE DOESN’T FALL FAR FROM THE TREE,” by SONNY McGOWN

A touching reminiscence by my friend, jazz collector and scholar Sonny McGown:

Through our correspondence over the years and my recent YouTube posts as “Davey Tough,”  our dear host Michael became aware of my father’s musical impact on my life. Quite often many people ask “How did you discover Jazz?” My story begins in 1952 at age 5, observing my father’s music related activities.

Sonny and Mac, later in life.

His name was Monroe “Mac” McGown and his story began at age 10 in the late 1930’s when he was fascinated and captured by the radio broadcasts he heard of the great Benny Goodman band with Krupa, Stacy, James, Elman et al and he soon started collecting Swing records up until the beginning of World War II. As a result of his boyhood hobby in Chemistry, he enlisted in the Navy at age 17 and became a Pharmacist’s Mate. He deployed with the U.S. Marines and eventually landed in one of the later waves of the horrific and extended battle of Okinawa. After being honorably discharged in 1946, he decided that Radio and TV electronics would be a promising career so he took correspondence classes and mastered the science. Soon he became a TV repairman and stockpiled his home with radios, TVs and various pieces of audio equipment such as turntables, amplifiers, and speakers.

His first job as a TV repairman was with the Southern Electric Appliance Company in Arlington, VA, who also sold phonograph records which necessarily enlarged his record collection and diminished his take home pay each payday. Sometime in 1950 he procured a Wilcox-Gay Home Disc recorder which allowed him to permanently capture radio and TV music broadcasts onto aluminum based acetate discs. Using his electronics skills, he wired the recorder input to the amplifier stages of the TV and radio thereby obtaining the best possible audio fidelity. 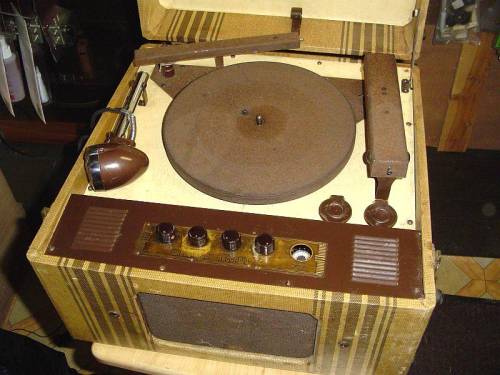 This is where my Jazz initiation begins.

Creating a record involved the constant removal of the metal shavings carved out by the heavy cutting arm. This feat was performed gently with a soft brush and without touching the disc in order to not disturb the turntable speed. Watching this process simply fascinated me and my father recognized an opportunity to stimulate my interest.  In 1952 he trained me to be the brush boy. All of a sudden, I was part of the music preservation process! Further, as fate would have it, I started to relate emotionally to the music as well. There was something captivating about it to me, particularly the rhythms and soon he made me keenly aware of artists like Benny Goodman, Louis Armstrong, Eddie Condon, Tommy and Jimmy Dorsey among many others.

Thanks to his instruction it wasn’t long before I was able to recognize them by sight and eventually by ear. For a kid this was truly exciting and was similar to seeing your favorite baseball player on TV whose trading card you had but in this case it was a recording that I possessed and could play over and over.

A few years later in 1955, home tape recording became commercially available and my father upgraded to a Magnecord M30 reel to reel recorder and the quality of the recordings vastly improved because there was no annoying surface noise which was inherent in the acetate disc surfaces. More technical training from my father ensued and I soon became an official tape recorder switch operator. At this point he had gained enough confidence in my ability to start and stop the recorder before and after a performance. Eventually he strategically staged a tape recorder setup in the living room, dining room, and master bedroom operational station was usually the bedroom. For upcoming program guidance, we subscribed to the weekly issue of TV Guide magazine which was pretty reliable at listing guest artists on various shows for the week so we had a good idea what to watch for music potential.

So much good Jazz was still on the air in the 1950s. Steve Allen was a serious Jazz promoter as well as an accomplished pianist and regularly featured numerous notable Jazz guests. Jackie Gleason promoted the Dorsey Brothers on “Stage Show.” NBC Monitor Radio had 15 minutes segments where they would cut away to another studio or Jazz venue and broadcast live music. Garry Moore was a big Jazz fan and had top flight talent in his “house band.” There were educational programs such as “The Subject Is Jazz” hosted by critic Gilbert Seldes, “The Stars of Jazz” series from the West Coast hosted by Bobby Troup, “The Timex All Star Jazz Concerts” were superb shows and “The 7 Lively Arts” series which included arguably the most famous Jazz TV broadcast which was the “Sound of Jazz” production. As a kid my favorite TV show was “Pete Kelly’s Blues” with the likes of Dick Cathcart, Matty Matlock, and Nick Fatool providing the background music. In hindsight, I was so fortunate to have the real time opportunity to absorb all of these wonderful sights and sounds by so many Jazz Giants including some who had just a few years left to live.

One of the best regular sources for good Jazz was the daily Arthur Godfrey Show on CBS Radio. Arthur loved Jazz and stocked his “house band” with renowned players such as Dick Hyman, Lou McGarity, Urbie Green, Remo Palmieri, Cozy Cole, and my favorite of all, clarinetist extraordinaire Johnny Mince. Each summer day for me began sitting beside our Zenith FM radio at 9 am with hopes that Johnny would be featured which happened quite often. We have some wonderful Godfrey recordings of eminent guests including Bobby Hackett, Peanuts Hucko, Benny Goodman, and Erroll Garner among many others.  What a show! You can imagine how sad I felt when summer recess ended.

As you can probably tell by now I was happily hooked on this wonderful music called Jazz due to all of the paternal influence around the house between 1952 and 1958. The next logical step was to begin record collecting. Fortunately, another key person entered my life at this time: and that was my Uncle Don who was my father’s brother. I had an RCA Victor 45 rpm only stackable record changer. Unc gave me several 45 rpm records with the first being a box set of the 1938 Benny Goodman Carnegie Hall concert. He also helped me expand my nascent collection by taking me each Saturday morning to Swillers, our local record shop, and I would pick out one 45 rpm single and they all came from the RCA Gold Standard series. Tommy Dorsey’s “Boogie Woogie” was my favorite followed closely by Benny Goodman’s “King Porter Stomp.”

Don also subscribed to the Jazztone and Columbia Record Clubs and there were new LPs arriving in the mail on a monthly basis. Eventually I expanded into LPs and my very first purchase was Columbia CL 547 titled “Jam Session Coast to Coast” with the Eddie Condon Gang representing the East Coast and the Rampart St. Paraders on the West Coast; truly one of the Classic Jazz LPs of all time. I wore out every groove on that disc!

Lastly, I must not forget my dear mother! We grocery shopped once a week and she allowed me to buy one record; yes, in those days even grocery stores sold records. Thanks to her I purchased the complete twelve volumes of “The RCA Victor Encyclopedia of Recorded Jazz” which cost a whopping $0.79 cents per 10 inch LP.

Eventually, there came a point where my father and I had our musical differences; thanks in particular to the “Jam Session Coast to Coast” album. He was more of a Big and Small Band Swing fan while I was more into the Condon style. He couldn’t convince me that Benny Goodman was better than Edmond Hall and I couldn’t convince him that Wild Bill Davison could cut Louis Armstrong. It took me some time to realize of course that he was right and I was simply naïve.

On another matter, I’m still feeling guilty to this day that I broke one of his most cherished 78 rpm records. He rarely got mad but this mishap was really disappointing to him. It was Brunswick 7699 by Teddy Wilson and His Orchestra. His favorite side was “Why Do I Lie to Myself About You” which is a real swinging instrumental with Johnny Hodges, Harry Carney, and Jonah Jones. I love that record myself, but I’ve never been able to find an original replacement copy because the flip side is “Them There Eyes” by the same band but with a vocal by Billie Holiday. All of Billie’s Brunswick records are highly collectible these days and tough to find. The search goes on even though my father passed away in 1997.

One last fond memory that I truly cherish from my formative period pertains to the release of the movie “The Benny Goodman Story”. My father’s Uncle was an accomplished organist and projectionist at the McHenry Theater on Light St. in Baltimore, MD.  When the BG movie came to town we made the 45 mile trip to Baltimore where Uncle George allowed us upstairs into the projection booth to directly access the theater sound system and tape record the soundtrack in the best fidelity. I still have that reel of tape from 1955 and it plays fine today.

To this point, I have addressed the first 6 years of my Jazz foundation all of which I recall as if it were yesterday. Needless to say, we had a fabulous time building a large Jazz archive together over many years until he passed away. One of the most memorable collecting moments occurred in the mid-1960s. I went to the Discount Record Shop in Washington DC and purchased 2 LPs on the Melodeon label produced by Dick Spottswood. These LPs were the first issue of the legendary and mysterious Bill Dodge World Transcription session featuring Benny Goodman and Bunny Berigan. This was unquestionably the greatest recording session with Benny and Bunny together. Also, as avid collectors, this was the kind of session that we never expected to be made available to the public. As soon as I got home that afternoon, I called him at work and he was in total disbelief. He was home in half an hour and we played those records over and over until midnight. For us, this day was like hitting the lottery!

Finally, I must note that my father influenced me in other ways that shaped the course of my life. His alternate passion for electronics lured me into that domain and we spent countless hours building AM and police band radios, repairing TVs and even making loudspeaker baffles from large cardboard boxes. These appealing projects led me to pursue a career in Electrical Engineering, working for the U.S. Navy for 35 years. Never one to be outdone, my father advanced as well by becoming a computer programmer, designing naval shipboard antennas at the Naval Research Laboratory for 40 years. As they say, “like father, like son.” I believe it was just meant to be.

Like many of you, I could go on about my Jazz influences and experiences. The way in which all of this happened has been key to much happiness in my life up to the present day. This music is joyful and comes from the heart. I can’t imagine my life without it and for that I am deeply grateful to my father in particular who fostered my musical and career paths. He didn’t push me into these realms but allowed me to naturally grow within them. As a result, my happiness still increases daily!

2 responses to “FOR FATHER’S DAY: “THE JAZZ APPLE DOESN’T FALL FAR FROM THE TREE,” by SONNY McGOWN”