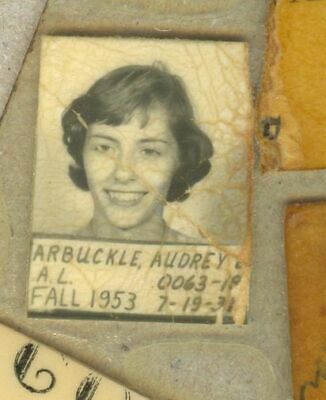 Since jazz fans seem — note I say seem — to be overwhelmingly male, it’s lovely to find this collection of jazz autographs collected by the young jazz fan Audrey Arbuckle, between 1954-56 in Chicago.  My guess is that “Buckles,” born July 19, 1931, is no longer collecting autographs and may no longer be with us, but I can’t prove it.

Here is a unique and amazing collection of famous jazz musician autographs on matchbooks, tickets and table cards put together during 1954-1956 by a young college student nicknamed “Buckles” who went to jazz clubs like the original Blue Note in Chicago and the Basin Street East.

Eventually Buckles had the autographs she collected laminated between a clear plastic sheet.

On one side, are the autographs of jazz legends Lester Young, Louis Armstrong, Duke Ellington, Dave Brubeck, Coleman Hawkins, Illinois Jacquet, Chet Baker, Carmen McRae, Sonny Stitt, Paul Quinichette (“Vice-Prez” to Lester’s “Prez”), Roy Eldridge, Jeri Southern and Paul Desmond. There is even the team of Kai Winding and J. J. Johnson whose combined autographs together, on the same page, from the same club date, is very hard to find.

On the other side of the laminated sheet is: Count Basie, the tragic, talented jazz singer Beverly Kenney, Bob Bates, drummer Candido, singer Chris Connor and the great Paul Gonslaves who signed his name on part of a Duke Ellington ticket. Gonsalves famously blew 27 insane bars during his sax solo on “Diminuendo and Crescendo in Blue” that sent the crowd at the 1956 Newport Jazz Festival into a frenzy and put Duke Ellington’s band, which had been going through a popularity slump, back in its rightful place. Also a picture of “Buckles” who got the autographs.

The laminated page — which no doubt preserved those sixty-five year old scraps of paper, although oddly — is up for bid at $850 or “best offer,” and here is the link.

And the photographic evidence: some of these signatures (Beverly Kenney!) are incredibly rare — but to think of this young woman who saw and heard so much, it’s astonishing.  The front side of the page, which takes some careful viewing:

and some close-ups, the first, Dave Brubeck:

then, the two trombone team of Jay and Kai: 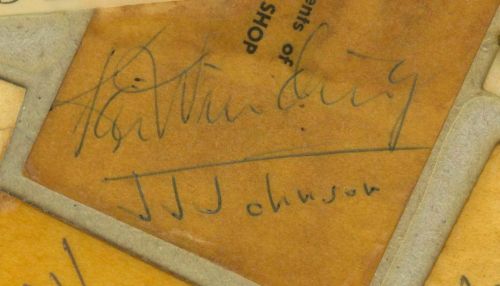 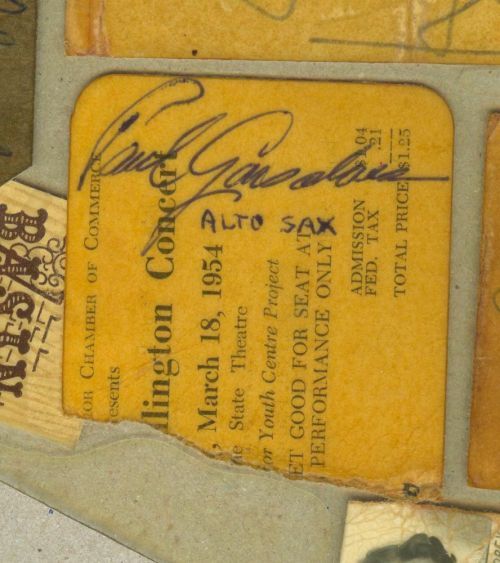 then, Coleman Hawkins and Illinois Jacquet: 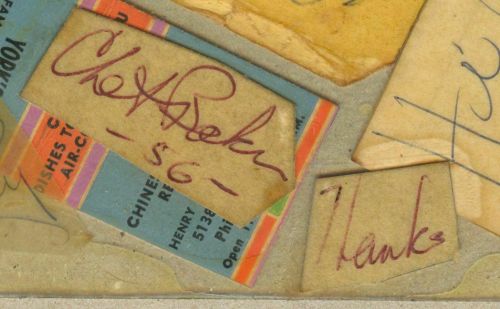 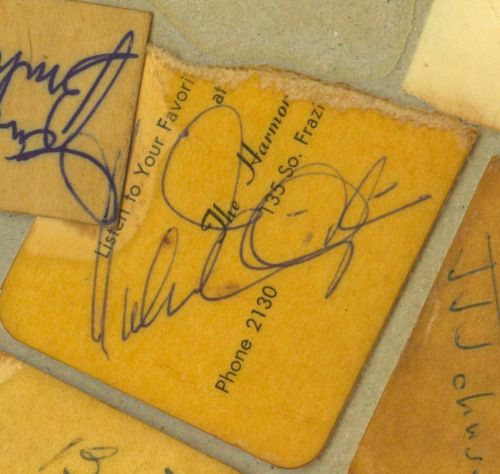 and what is the prize of the collection (second place goes to Beverly Kenney’s neat handwriting) a Lester Young autograph.  Even though it looks as though it was written on a piece of Scotch tape, such deity-sightings are rare:

and, a little music, lest we forget the point of these exalted scribbles:

Wherever you are now, Buckles, whatever names you took later in life, know that we cherish you and your devotion.  Did you graduate college, have a career, get married and have a family?  The laminated page says to me that these signatures and experiences were precious.  But what happened to you?  I wish I knew.

This just in, thanks to Detective Richard Salvucci, formerly of the Philadelphia police force, and one of this blog’s dearest readers: https://www.findagrave.com/memorial/113718218 — which suggests that Audrey Ellen Arbuckle was born in 1934 and died in 2009, buried in an Erie, Pennsylvania cemetery.  I wish she were here to read this, but I am sure her spirit still swings.