November 21, 2019 might have been an unremarkable day and night for some of us — leaving aside that it is Coleman Hawkins’ birthday — but at Cafe Bohemia, 15 Barrow Street, Greenwich Village, New York City, the stars were wonderfully in alignment when Danny Tobias, trumpet / Eb alto horn, Dan Block, clarinet / tenor, Josh Dunn, guitar, and Tal Ronen took the stage.

As James Chirillo says, “Music was made,” and we dare not underestimate the importance of that. 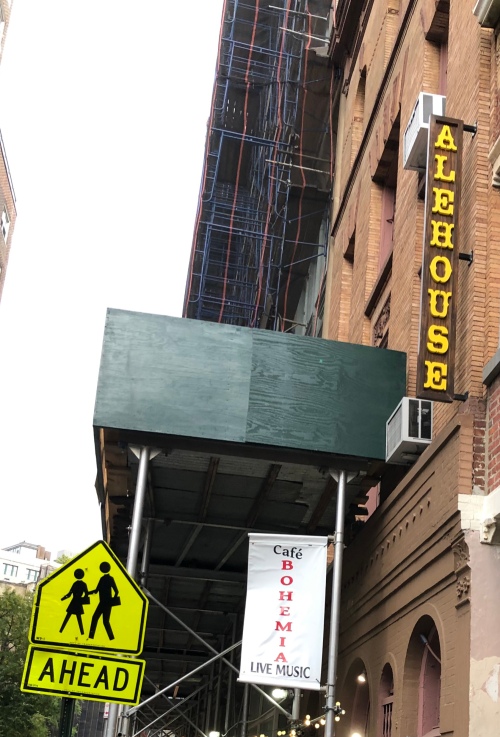 Not just formulaic “music,” but eloquent, swinging, lyrical playing in solo and ensemble, as you can hear in their BLUE AND SENTIMENTAL I’ve already posted here.

Those who take improvised music casually don’t realize the combination of skill, emotion, restraint, and individuality that is at its heart, where musicians create a model community for a few hours.

I hear an intelligent graciousness, where no one musician wants to be powerful at the expense of the others, where collective generosity is the goal, playing “for the comfort of the band,” as Baby Dodds described it — but when a solo opportunity comes along, each musician must be ready to speak their piece, share their distinct voice.  Too much ego and the band squabbles; too little ego and you have watery oatmeal for the ears.

That such music as you hear here and elsewhere on JAZZ LIVES exists is, to me, frankly miraculous.  Five glowing memorable examples of this holy art follow.  And if these sounds remind anyone of a small Count Basie group (you can add the sounds of Jo Jones in your head, if you care to) that would be fine also.

WRAP YOUR TROUBLES IN DREAMS: