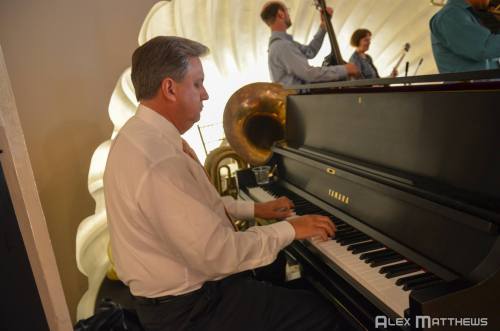 Photograph by Alex Matthews, 2014, with Marty Eggers and Katie Cavera.

John Royen is a masterful musician, and it was an honor to encounter him at the 2019 San Diego Jazz Fest.  Here‘s the first part of the story, with performances including Hal Smith, Marty Eggers, Katie Cavera, and Dan Levinson, as well as a dramatic medical tale.

At the very end of the festival, John assembled a delightful small band with Joe Goldberg, clarinet; Riley Baker, drums [you can’t see him, but you can certainly feel his reassuring pulse]; Marty Eggers, string bass — and, on JUST TELEPHONE ME, the delightful reedman John Otto joined in.  Here are the first performances from that set.  Not only does John play up a storm, but he is a wonderful bandleader — directing traffic and entertaining us without jokes.  If you follow JAZZ LIVES, you already admire Marty Eggers, but Riley’s drumming is better than wonderful, and it’s lovely to hear Joe out in the open like this (he’s one of the sparkplugs of Hal Smith’s On the Levee Jazz Band also).  How they all swing!

I always think I am weary of INDIANA, since so many bands play it too fast in a perfunctory manner, but John’s version is a refreshing antidote to formula:

Then, a highlight of the whole weekend — John Otto brought his alto saxophone and John Royen led the band into a song you never hear north of NOLA — (WHENEVER YOU’RE LONELY) JUST TELEPHONE ME, with a particularly charming vocal — charming because it’s completely heartfelt:

Alas, John Otto “had to go to work,” so he couldn’t stay — I would subsidize a CD of this band, by the way.

I have some of the same feelings about AIN’T MISBEHAVIN’ that I do about INDIANA — many bands run through it too quickly (it is a love song, dear friends) and call it when they can’t agree on the next selection . . . but here John, Joe, Marty, and Riley restore its original character.  And don’t miss John’s surprising bridge:

People who don’t know better will assert that SHINE is a “racist” song — they and you should read the real story — SHINE, RECONSIDERED  — and this performance shines with happy energy:

Since it doesn’t do anyone good to unload the whole truckload of joys at once, I will only say here that five more performances from this set are just waiting for a decent interval.  Watch this space.  And bless these inspired players.

Posted in "Thanks A Million", Bliss!, Generosities, Hotter Than That, Ideal Places, It's All True, Jazz Titans, Mmmmmmmmmmmmm!, Pay Attention!, SURPRISE!, Swing You Cats!, That Was Fun!, The Heroes Among Us, The Real Thing, The Things We Love, Wow!