I’ve been putting off this post because it makes me sad to write about these fine musicians I won’t encounter face to face again: I didn’t know either of them well, but felt that we had connected in various ways.  But it would be worse than my sadness to let their beauty be forgotten in the relentless howl of the news.  And although I cannot assume that John and Peter were close friends, their characteristic graciousness suggests to me that they would have known and admired each other.  So I trust they won’t mind the propinquity of this blogpost. 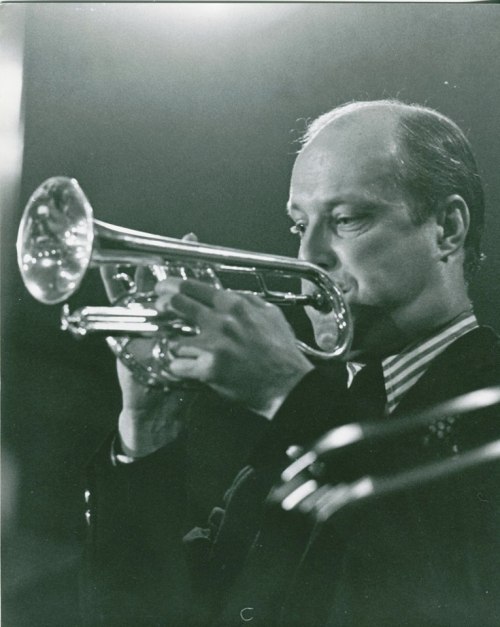 John Bucher, some years ago, photograph courtesy of The Syncopated Times

John Bucher moved on — to “go home,” in his own words, on April 5: he was 89 and had a long-time cardiac condition.  Peter Ecklund, who had dealt with Parkinson’s disease for a long time, moved to his own destination in another neighborhood on April 8: he was 74. 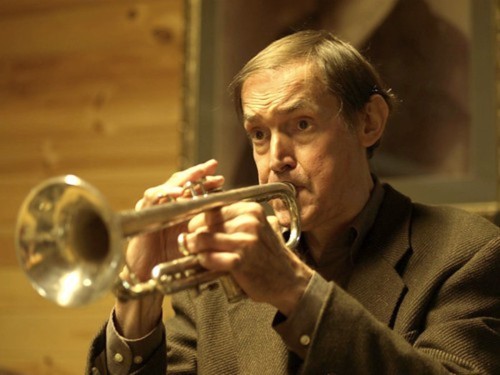 I didn’t know either of them well enough to have extended conversations, but I believe they both — in the past two decades — recognized me as being on their side, whether I was writing for The Mississippi Rag or another periodical, or, eventually, carrying a camera and a notebook for JAZZ LIVES.  Peter was gracious to me but terse in all communications — in person or in email — but I was aware that his health was a burden to him and perhaps, although I could publicize a gig, I might also capture his playing in ways that did not show him in the best light.  (In both Peter’s and John’s case, I did get permission to make any video public, and would have honored their wish to delete a performance.)  John would give me a substantial grin when I greeted him; circumstances never allowed us to sit down and talk, but he made me very welcome.

My awareness of Peter goes back before I met him in person, to recordings he made in 1987 for the Stomp Off label — one under Marty Grosz’s name (“The Keepers of the Flame”) and one session that Peter led (“Melody Makers”) — brilliant recordings that I played and replayed.  I may have found them at the Corner Bookstore in East Setauket, run by Nancy Mullen: Nancy and Frank were serious jazz fans who had celebrated their engagement at the bar at Lou Terassi’s in 1951 or 2, with Hot Lips Page and Zutty Singleton adjacent to them.  That, I point out, is the way to do it, although you’d have to find other comrades today.

In 1990, Nancy and Frank invited me to join them for a concert given by the Long Island Traditional Jazz Society in North Babylon, if I have the name right — Marty Grosz, Peter, Dan Barrett, Joe Muranyi, perhaps Greg Cohen and Arnie Kinsella — memorable to me now, thirty years later, for Muranyi singing LOUISIANA FAIRY TALE and interpolating, “Can it be NORTH BABYLON at last?”  I bought all the Stomp Off records and, later, the Arbors Records and Jazzology CDs on which Peter appeared, often as a key player in Marty Grosz’s Orphan Newsboys.  Peter had incredible leaping facility — romping through Jabbo Smith’s JAZZ BATTLE at top speed — but he was also a lyrical swinger who could create a memorable short story in a four-bar break.  When I heard him in person, he reminded me of Doc Cheatham — the light-footed dancing in air quality, a man with many delicate ideas to offer us in a chorus.

I met John in person for the first time in 2005, I think, at the Cajun — and admired him instantly.  Like Peter, I had heard him first, but in John’s case, not known his identity: John played on the soundtrack of Woody Allen’s SLEEPER, which was a hit at the movie theatre where I worked as a doorman (“Good evening,” tearing the paper ticket, then returning it with “Thank you.”)  so his firm swinging lead on CANAL STREET BLUES impressed me over and over.  I wish I’d known that he was playing so I could have told him this story when we met, nearly a quarter-century later.  But he knew how much I enjoyed his playing — whether at the Cajun, in a trio with Marty and John Beal at Charley O’s in midtown, or sitting in with the EarRegulars at the Ear Inn.  John was a thoughtful “singing” player who never hurried or missed a step, but he was never stiff.  A favorite quote, inserted neatly, was COLUMBIA, THE GEM OF THE OCEAN, which always made me laugh with pleasure.  He stayed in the middle register, but occasionally would end phrases with a growl or find a mute he liked to vary his sound.

Roswell Rudd once told me, “You play your personality,” and both of these gentlemen did just that.  Peter’s playing could be heated and impetuous, rounding the corner of a hot chorus, but he was poised and epigrammatic in person.  John, who made his living as some variety of stockbroker (he told his colleague and my friend Dick Dreiwitz that it was a career where he could go to work at 10 and stop at 3) was beautifully dressed; he sat up straight when playing.

After all those words, here is some lovely music.  I video-recorded John at the Cajun in 2006 (a whole evening) and when he visited The Ear Inn in 2010.  All the details are in the blogposts.

It distresses me to realize that I and my camera came along too late in Peter’s playing career to have rewarding video-footage of his beautiful hot cornet playing, so I will include these performances, knowing that John would not feel slighted in the least.

and something for Bing (with a distinct Davison flavor):

I write this at the start of May 2020, having mourned a number of completely irreplaceable musicians — and people — whom I knew as well as heard.  I feel unequal to the task of mourning John and Peter adequately.  I also hope they sensed — when we did encounter each other — how much joy it brought me to see them on the bandstand, a pleasure that sustained itself through the evening and does so, years later, in memory and in video.

Blessings on you, inventive gentlemen of brass.  You can’t be replaced.  And I invite those readers who knew and admired John and Peter to chime in.