I hadn’t heard of Chambersburg, Pennsylvania before the summer of 2015, when drummer-percussionist-archivist Josh Duffee announced his intention of giving a concert with his ten-piece Graystone Monarchs to celebrate the appearance of the Jean Goldkette Orchestra at the Capitol Theater on May 4, 1927, which was a triumphant evening, made even more so because Chambersburg was legendary drummer Chauncey Morehouse’s home town. 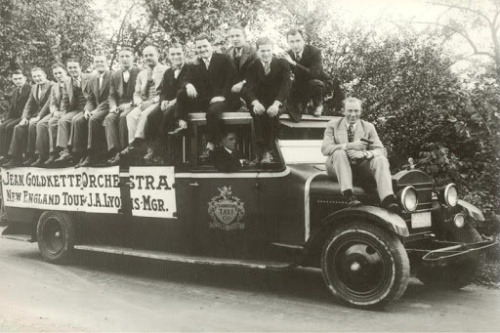 As you will see, the modern evening was triumphant also.  And a fact that says something about Josh’s devotion to the jazz heritage — the 2015 concert was free to the public (I am sure the 1927 one wasn’t).

Twelve performances from this evening have been approved for you to enjoy, and I have taken the perhaps unusual step in presenting them in three portions, as if you’d bought two new records from the local Victor dealer and would have weeks or more to savor them.  But eight more performances will follow.

SLOW RIVER, arranged by Bill Challis, who told Phil Schaap he hated the limp melody and tried to bury and sabotage it:

DINAH, harking back to the 1926 version featuring Steve Brown:

And the fourth “side,” from Chauncey’s days with the 1935 Russ Morgan orchestra: