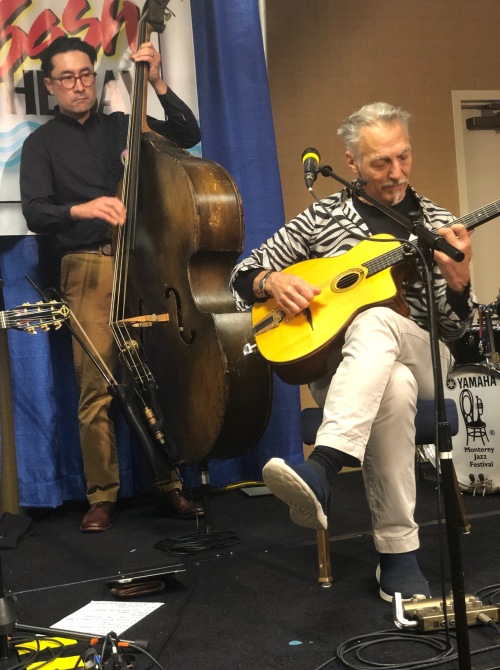 This beautiful set of gypsy jazz — hot and lyrical, with all the possible shadings in between — was the last music I heard at the 2020 Jazz Bash by the Bay, and the last music I heard at a jazz festival in this wickedly unpredictable year.  So it has not only beauty but a certain poignancy, rather like the last delicious spoonful for an indeterminate time.  The brilliant players and singers of Le Jazz Hot are Paul Mehling, guitar, vocals; Evan Price, violin; Sam Rocha, rhythm guitar, vocals; Mikiya Matsuda, string bass.  At the end of the set — which will appear in the sequel, to remember Bartelby — my hero-friends Marc Caparone, cornet; Dawn Lambeth, vocals, dropped by and added more good sounds.

I always think that the perspectives of the musicians themselves are more important than mine, so I asked Paul to write something about this occasion that no one recognized at the time as so significant:

Looking back on these performances which would turn out to be the “last” of Le Jazz Hot Quartet from “BEFORE TIMES” I’m struck with a bittersweet joy: of course we had no way of knowing…
For those of you who don’t know us: this is what happens when musicians feel connected to their listeners (and vice versa!): synergy not just within the band, but a certain give-and-take with the audience where they’re in on the joke(s), verbal and musical.
This festival was a mutli-faceted victory for us:
*we’d been invited back after a very long hiatus and we were GRATEFUL and wanted to SHOW IT
*we were super thrilled to be among such stellar fellow acts, some of whom we invited to join our little show, many of whom were just in the room to enjoy themselves
*we clearly were bringing IT -as we do, but there’s always the chance that the little EXTRA something will spark some great moments and these videos captured so many delights.

Michael seems to often be in the right place at the right time. He deserves an extra-special honorary award for these end-of-an-era captures. We’re all going to come back roaring onto the jazz venues and stages when this pandemic blows over- JAZZ IS NOT OVER- in the meantime, we have these videos for consolation.

Asking the musical question, I WONDER WHERE MY BABY IS TONIGHT (the lyrics say she is off doing the Charleston — oh, for those sweetly antique times):

Paul (played by Steve Allen in the biographical film) explains BE THAT WAY:

They say this 1929 classic is good for the soul:

Sam sings an ode to the U.S. Mail, ONE SWEET LETTER FROM YOU:

and that dear song, NEVERTHELESS (I’M IN LOVE WITH YOU):

The second half of this set begins with a STRUT, so stay tuned.  All the musicians I know have had their incomes stop or deflate just a few days later in March.  I hope that viewers who enjoy this music can offer gratitude in tangible form.  Thus . . . the PayPal link is pazzo@hotclubsf.com.  Your generosity repays the people who give us so much.