When Don Ewell came to New York in 1981 to play at Hanratty’s, the New York Times jazz critic John S. Wilson did a piece heralding Ewell’s “classical piano,” and Don had this to say: “A lot of jazz pianists look down on the old classic way of playing.  I’m not a reactionary, but I don’t want to go too far out on a limb. I like the trunk of the tree. Jazz is a people’s music and it should have at least a suggestion of melody.”

You can always hear Ewell’s love of melody in his playing; he never treats any composition he is improvising on as a collection of chord changes, which is one of the most beautiful aspects of his playing.  His touch, his moderate tempos, giving each performance the feeling of a graceful steadiness, also are so rewarding.

Twice at the Manassas Jazz Festival, in 1979 and 1981, Don and Dick Wellstood — who admired each other greatly — had the chance, however briefly, to share a stage. 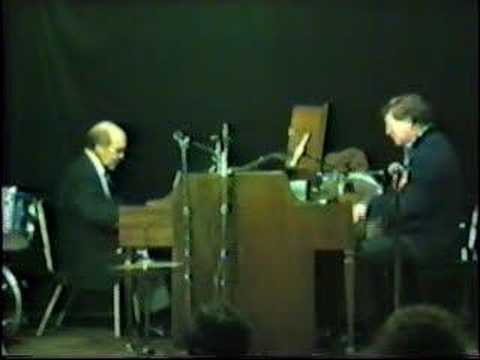 Because of their mutual respect, it wasn’t an exhibition: they were mature artists who knew that Faster and Louder have their place, but also have their limits.  The video I will present here begins with three solo performances of “ragtime,” loosely defined, by Dick, and then goes a year forward into four duet performances.  Yes, both the MC and the audience are slightly intrusive, and the pianos are not perfect, but I like to imagine that the slight informality made Don and Dick more at ease.  The music is peerless, and the video presents a rare summit meeting.  I thank our benefactor, Joe Shepherd, one of the music’s secular angels, for making it possible for me to share this with you.

When I was doing research for this post, I found I had offered one song from the Ewell-Wellstood duets of 1981, I WOULD DO MOST ANYTHING FOR YOU — again, thanks to Joe —  here it is again.  I wonder if more video of that session (six songs made it to record) exists.