Good and hot, rare and fresh, a recent eBay purchase. 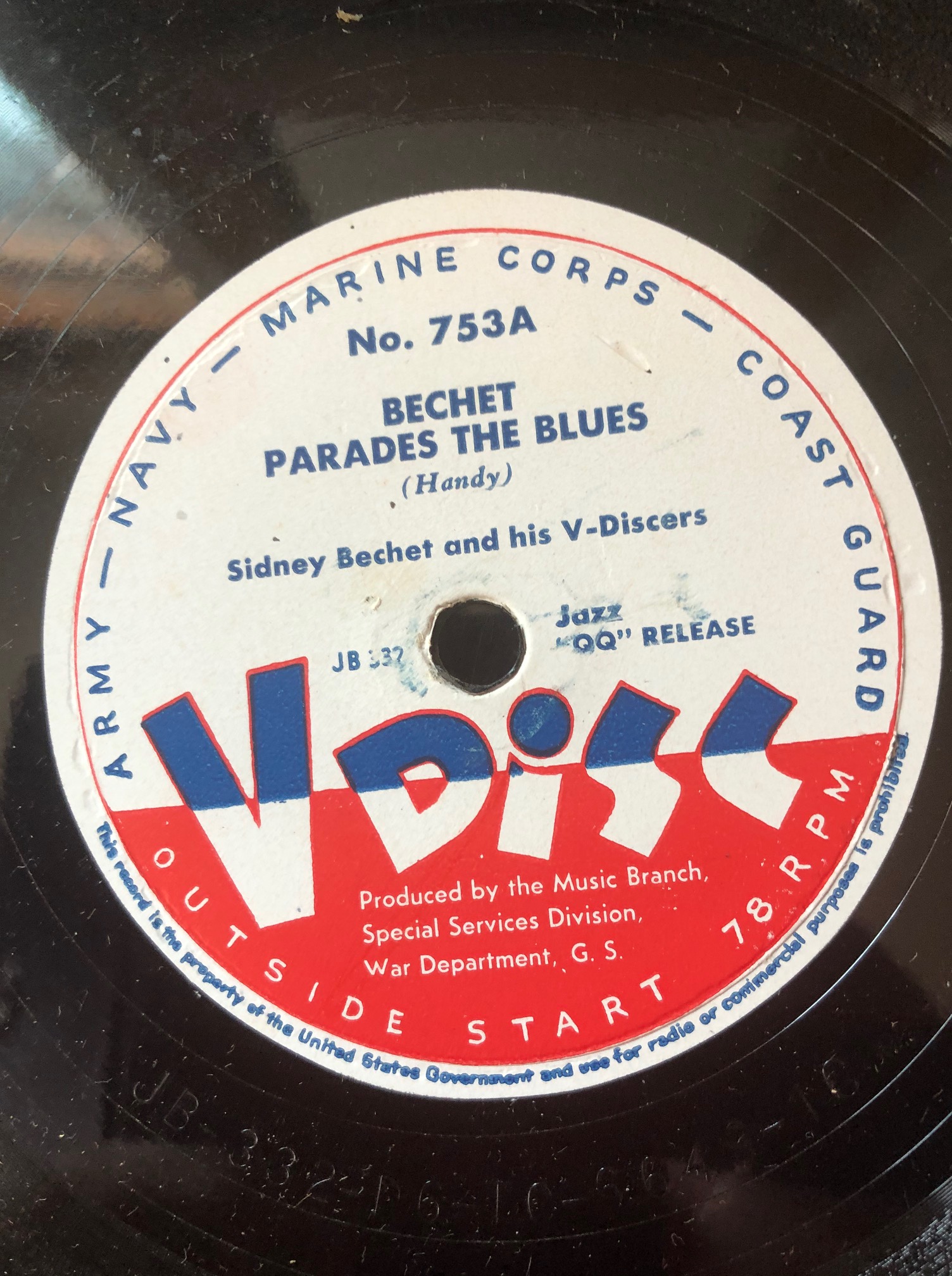 It’s immediately recognizable as ST. LOUIS BLUES, but it’s great fun no matter who got the composer royalties. (Whether there was some intended connection to Glenn Miller’s ST. LOUIS BLUES MARCH, recorded for V-Disc in late October, I don’t know.)

This extended performance was recorded for V-Disc on December 9, 1943.  It features Bechet, soprano saxophone; Vic Dickenson, trombone; Don Donaldson, piano; Ernest Myers, string bass; Wilbert Kirk, drums. Someday I could do a better transfer: maybe when the world is properly back on its axis. Whenever.  Vic and Sidney made a superb team and they gigged as a two-man front line, although in their record dates from 1941 to 1958, there was usually a trumpet player attempting to lead the band.  They were both instantly identifiable soloists but also the best intuitive ensemble players: hear how they hand off the lead here, supported by a fine rhythm section.

Two other sides — AFTER YOU’VE GONE and BUGLE CALL RAG – OLE MISS were recorded and issued — each selection on one side of a different V-Disc.  But a fourth side was not issued at the time and is thus tantalizing.  It was assigned the matrix number of JB 331, and is called MEDLEY OF PARODIES, the parodies of current pop hits being DEAR MOM, TANGERINE, NAGASAKI.

Decades ago, David J. Weiner, who knows what a glass-based V-Disc acetate looks like, told me (or did I dream it?) that TANGERINE was a parody now called GASOLINE, because of wartime rationing, and that Vic sang it.  I can imagine how his opening phrase sounds.  Tom Lord lists the vocalist as Myers, but I have hopes of Vic.

And this tiny mystery gets even better, at least to me.  I had thought that recording completely lost, but one copy at least survived, and was issued on a fourteen-CD set called SIDNEY BECHET: COMPLETE AMERICAN MASTERS (1931-1953), issued on the French “Universal” label as (F)533616-7.  But wait! There’s more!  The box set, issued in 2011, seems completely unavailable, but several sites advertising it offer the first sixty seconds of this performance, where Bechet, acting atypically like a jovial master of ceremonies bringing on a production number, introduces Myers to sing DEAR MOM: Myers begins it, the band chimes in, and the sample ends.

If anyone has that set and can send me a digital copy of the MEDLEY OF PARODIES, I will create an appropriate reward: perhaps I have something here in my apartment-collection that would gratify the as-yet unidentified benefactor.  Find me at swingyoucats@gmail. com, and many thanks in advance!

And until that desire is fulfilled, let us keep on parading with Sidney, Vic, Don, Ernest, and Wilbert.

Posted in "Thanks A Million", Bliss!, Generosities, Hotter Than That, Irreplaceable, It's A Mystery, It's All True, Jazz Titans, Jazz Worth Reading, Pay Attention!, SURPRISE!, Swing You Cats!, That Was Fun!, The Heroes Among Us, The Real Thing, The Things We Love, Wow!