Then there’s the luminous and rarely-praised Billy Butterfield, who navigated a fifty-year career in small hot groups, in big bands, in the studios, and more: lead and jazz soloist for Bob Crosby, Benny Goodman, and Artie Shaw.  When Dick Sudhalter asked Bobby Hackett who was the best trumpeter playing now (circa 1971) Bobby named Billy. 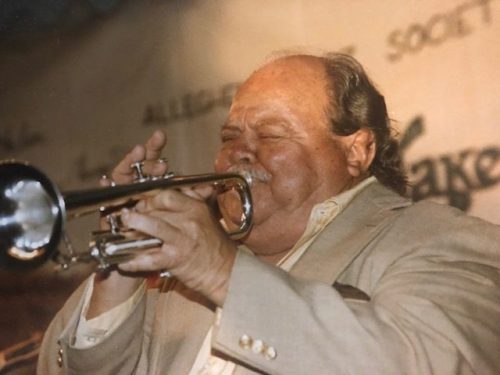 Billy at one of the Conneaut Lake Jazz Parties, perhaps early Eighties.

Coincidentally, Professor Salvucci and I have been discussing Billy (in the gaps in our conversations when we focus on the positive) and it is thus wonderful synchronicity to find my friend “Davey Tough” (who has perfect taste) having posted two beautiful examples of Billy’s playing on YouTube.

Here’s Billy in 1942, with the Les Brown Orchestra, performing SUNDAY:

And in 1955, something I’d never known existed:

and Billy on flugelhorn with the World’s Greatest Jazz Band:

My contribution to the great hoard of Butterfieldiana is this video (thanks to kind Joe Shepherd) of a session at the Manassas Jazz Festival, December 1, 1978, with luminaries surrounding Billy: Tony DiNicola, Van Perry, Marty Grosz, Dick Wellstood, Spencer Clark, Kenny Davern, Spiegle Willcox: savor it here.

And one other piece of beautiful evidence:

How many people have memorized that record, or at least danced to it, without knowing who the trumpet soloist — bravura and delicate both — was?

Here is an excerpt from a 1985 interview with Billy, so you can hear his voice.

Wondering why some artists become stars and others do not is always somewhat fruitless.  I suspect that Billy played with such elegant power and ease that people took him for granted.  Looking at his recording career, it’s easy to say, “Oh, he didn’t care if he was a leader or a sideman,” but he did have his own successful big band (recording for Capitol) and in the mid-Fifties, inconceivable as it seems now, his small band with Nick Caiazza and Cliff Leeman was a hit on college campuses and made records; he also led large groups for RCA Victor.

But I suspect he was just as happy playing LADY BE GOOD with a pick-up group (as he did at the last Eddie Condon’s) as he was reading charts for a studio big band or playing beautiful solos on a Buck Clayton Jam Session.  I also suspect that he wasn’t instantly recognizable to the general audience or even the jazz fans as were his competitors for the spotlight: Hackett, Jonah Jones, Charlie Shavers, Ruby Braff.  He didn’t have a gimmick, nor did he care to.

And once the big band era ended, other, more extroverted trumpeters got more attention: Harry James, Clark Terry, Doc Severinsen, Dizzy Gillespie, Al Hirt.  When I’ve watched Billy in videos, he seems almost shy: announcing the next song in as few words as possible and then returning to the horn.  Unlike Berigan, whom he occasionally resembles, he didn’t bring with him the drama of a self-destructive brief life.

Finally, and sadly, because he began with Bob Crosby, was an honored soloist at the Eddie Condon Town Hall concerts, and ended his career with a long glorious run with the World’s Greatest Jazz Band (where I saw him) I believe he was typecast as a “Dixieland” musician, which is a pity: he had so much more in him than JAZZ ME BLUES.

Consider this: a duet with Dick Wellstood that bears no resemblance to straw-hat-and-striped-vest music:

Billy should be more than a half-remembered name.

Posted in "Thanks A Million", Bliss!, Generosities, Hotter Than That, Irreplaceable, It's A Mystery, It's All True, Jazz Titans, Jazz Worth Reading, Pay Attention!, Swing You Cats!, That Was Fun!, The Heroes Among Us, The Real Thing, The Things We Love, Wow!