This just in — corrections and additions from jazz scholars Mark Miller and Kris Bauwens.  It’s good to have wise friends!

Christine Manchisi, a very gracious Canadian antique dealer-entrepreneur, found an intriguing jazz artifact, a souvenir from a now-vanished night club, and then found me . . . and a match was made.  First, a little background.

In those days, not only did musicians sign their names, but they wrote the instrument they played: thus, Miff Mole, trombone; Shad Collins, trumpet; Hank D’Amico, clarinet; Cozy Cole, drums; Pinie Caceres, piano. 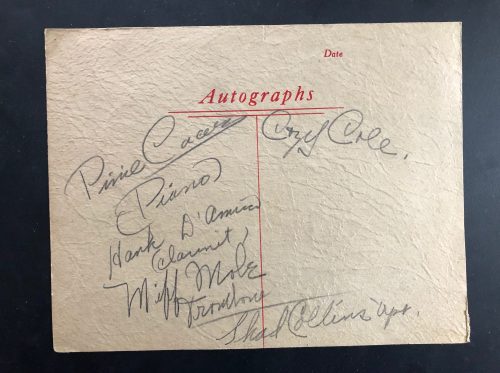 It was Miff’s band, and after leaving Goodman, he had a brief Toronto residency in September 1943 (the usually impeccable John Chilton has it in August, but Mark Miller provided the dated newspaper advertisement below).  I believe that these men were either on leave from big bands (Tommy Dorsey and Cab Calloway) or from radio studio work.  I am guessing that the prospect of a few weeks or a month in Toronto with no one-nighters must have been greatly appealing.  A respite from reading charts and doing section work would have been like a vacation.

But let us imagine a little more.  I think that the talent booker for the Top Hat might have sent Miff a telegram (“a wire”) and asked if he’d like to bring a group there, offering a price, perhaps even suggesting accommodations.  The group has been identified as a sextet, but only five signatures are on the club paper we have here, which suggests that the string bassist (if there were one) was a local player.  What interests me more are the people Miff either called or ended up with — we can’t know — and there are logical threads here.  Miff would have known Shad, Cozy, and perhaps Hank from New York gigs or radio work — later, Cozy and Hank would show up at Eddie Condon’s concerts — and he might well have encountered Pinie Caceres through Pinie’s more famous brother, Ernie.  Or they might have spoken to each other at the bar at Julius’.  It’s a particularly intriguing lineup for those who immediately associate Miff with Wild Bill, Bobby, or Muggsy, Pee Wee, and the rest of the Commodore crew.

What tunes did Miff call?  ROYAL GARDEN BLUES?  I don’t dare assume, unless someone comes up with a review in a Toronto newspaper.  (Mark Miller wasn’t born yet.)  Where are the heirs of a Canadian Jerry Newman or Dean Benedetti for some lovely acetate discs?  And did Miff and company enjoy the boardwalk in daylight, or were they sleeping?  Or was part of their day sitting at a table and signing a hundred of these cards to be given to patrons as a souvenir of their evening-out-with-jazz-and-dinner?  The autographs are too tidy to be on-the-spot, the kind a musician would sign for an eager fan while having an autograph book pressed on him.  But they are lovely evidence. 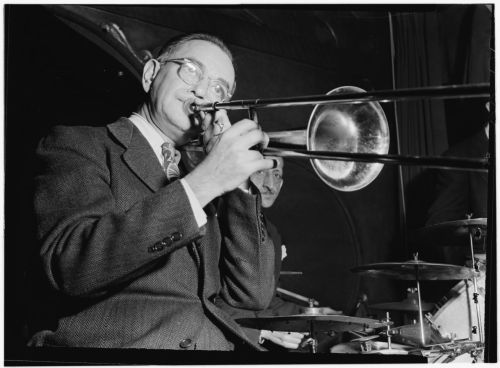 And I now know that the Top Hat was a jazz mecca even before 1943.  Mark has told me that Coleman Hawkins appeared there with Don Byas and Monk!  Thanks to Kris Bauwens, we have delightful evidence of Fats Waller appearing there in 1942: the playing card comes from a Norwegian sailor who had wonderful memories of the card game:

One response to “WHAT DID THEY SOUND LIKE? (Toronto, September 1943)”