The new CD by the Brooks Prumo Orchestra, THIS YEAR’S KISSES, is wonderfully groovy, rather like the thing you can’t stay away from, Bert Lahr’s single Lay’s potato chip.  (You can look that up on YouTube.  I’ll wait.)  By the way, I loved the BPO’s first CD, PASS THE BOUNCE (2017): read about it here.

Here‘s the Bandcamp link for KISSES, where you can see the personnel, the song titles, hear a sample, download, or purchase this CD. 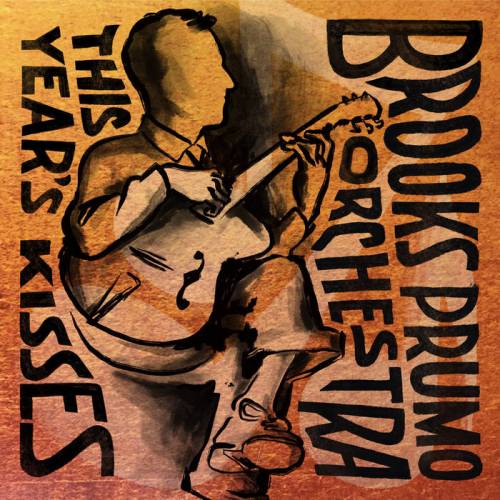 Happily, the CD is very forgiving of the dance-challenged: it allows me to sit in my chair, listen, and beam.  And to give you an idea of the intense attraction I had for this CD on my first hearing I thought, “I want this CD!” and then calmed down enough to think, “You already have it.”

Listening to it again and again, I envisioned the eleven members of this orchestra as a kind of M.C. Escher drawing, people swimming blissfully in two divergent streams at once.  One could be labeled NOW, which means that the musicians here sound like themselves — and their voices are so individualistic — but they are also having a high old time splashing around in THEN, so that many of the performances have a tender connection to past recorded performances.  But there is no conscious attempt (use your Steve Martin voice) to say, “Hey! Let’s Get OLD!” — no archival stiffness.  And the familiar material, say SOMEBODY, BROADWAY, NOWHERE, is delightfully enlivened by the band’s passionate immersion in not only the notes but the emotions.

The rhythm section is fine-tuned, flexible and resourceful, four individuals playing as one; the solos are memorable; the ensemble work is both loose and graciously cohesive.  This is a band, and even if there isn’t the official BPO band bus for the one-nighters, you can hear their pleasure in working together, easy and intense.

And a few lines, once again, for the miracle of nature known as Alice Spencer, who takes familiar music and makes it fresh, who makes songs associated with Billie Holiday for decades into her own without warping their intent, who can be perky or melancholy with utter conviction.  She is full of surprises — many singers telegraph what they are going to do in the next four bars, but she doesn’t — although her surprises always seem like the right thing once they have landed.  I won’t compare her to other singers: rather, she has an aura like a great film actress, comfortable in many roles.  Think Joan Blondell or Jean Arthur, and you have some idea of her great personal appeal.

This CD is a great gift.  It’s music for dancers, music for those of us who know the originals, music for people who need joy in their lives.  THIS YEAR’S KISSES is like sunshine breaking through: a consistent delight, much appreciated.  Now, if you’ll excuse me, I need to listen to it again.

Posted in "Thanks A Million", Bliss!, Generosities, Hotter Than That, It's All True, Jazz Titans, Mmmmmmmmmmmmm!, Pay Attention!, SURPRISE!, Swing You Cats!, That Was Fun!, The Heroes Among Us, The Real Thing, The Things We Love, Wow!