Jake Hanna would often say, “Start swinging from the beginning!”  He would have loved the Mint Julep Jazz Band and their new CD, BATTLE AXE.  Jake isn’t around to embrace them, but I will and do.

Hear and see for yourself: OLD KING DOOJI, live, from June 2015:

ROCK IT FOR ME, from the previous year:

Why I love the Mint Julep Jazz Band (unlike a Letterman list, there are not ten items, and they are presented here without hierarchical value):

One.  Expert, accurate, relaxed swinging playing in solo and ensemble.  No matter how authentic their vintage costumes; no matter how gorgeous they are personally, for me a band must sound good.  I can’t hear cute.

The MJJB has a wonderful ensemble sound: often fuller than their four-horn, three rhythm congregation would lead you to expect.  Their intonation is on target, their unison passages are elegantly done but never stiff.

And they swing.  They sound like a working band that would have had a good time making the dancers sweat and glow at the Savoy or the Renny.

They are well-rehearsed but not bored by it all. They have individualistic soloists — the front line is happily improvising in their own swinging style always.  And a word about “style.”  I’ve heard “swing bands” where the soloists sound constricted: Taft Jordan wouldn’t have played that substitute chord, so I won’t / can’t either — OR — let me do my favorite 1974 Miles licks on this Chick Webb-inspired chart.  And let me do them for four choruses.  Neither approach works for me, although I am admittedly a tough audience.  Beautiful playing, folks.  And a rhythm section that catches every nuance and propels the band forward without pushing or straining.  I never feel the absence of a piano.

Two.  Nifty arrangements.  See One.  Intriguing voicings, original but always idiomatic approaches to music that is so strongly identified with its original arrangements.  I played some of this disc for very erudite friends, who said, “Wow, a soprano lead on that chorus!” and other such appreciative exclamations.  Sweet, inevitable surprises throughout — but always in the service of the song, the mood, the idiom.

Three.  Variety in tempos, approaches, effect.  When I listen to BATTLE AXE, I’m always startled when it’s over.  Other CDs . . . I sometimes get up, see how many tracks are left, sigh, and go back to my listening.

Four.  They honor the old records but they do not copy them.  They do not offer transcriptions of solos, although a listener can hear the wonderful results of their loving close listening.

Five.  Unhackneyed repertoire: YOU CAN’T LIVE IN HARLEM / DUCKY WUCKY / SIX JERKS IN A JEEP / SWINGTIME IN HONOLULU / OLD KING DOOJI / EXACTLY LIKE YOU / THAT’S THE BLUES, OLD MAN / NIGHT ON BALD MOUNTAIN / TWO SLEEPY PEOPLE / WHEN I GET LOW I GET HIGH / EVERYTHING’S JUMPIN’ / SAY IT ISN’T SO / BETCHA NICKEL / BATTLE AXE — affectionate nods to Sammy Cahn and Saul Chaplin, Noble Sissle, the Andrews Sisters, small-band Ellington (yes!), Artie Shaw, Lunceford, young Ella, and more. But obviously chosen with discernment.  And the originals by Keenan McKenzie are splendid — idiomatic without being pastiche, real compositions by someone who knows how to write singable melodies and graceful evocative lyrics: TREBUCHET and THE DWINDLING LIGHT BY THE SEA.

Six.  Laura Windley.  There are so many beautiful (male and female) earnest almost-singers in the world.  Audiences admire them while they are visually accessible.  I listen with my eyes closed at first.  Laura is THE REAL THING — she swings, she has a splendid but conversational approach to the lyrics; her second choruses don’t mimic her first.  And her voice is in itself a pleasure — a tart affectionate mixture of early Ella, Ivie, Jerry Kruger, Sally Gooding.  I think of her as the Joan Blondell of swing singing: sweet, tender, and lemony all at once.  And once you’ve heard her, you won’t mistake her for anyone else.

Here is the band’s website — where you can purchase BATTLE AXE, digitally or tangibly.  And their Facebook page.

And I proudly wear their dark-green MINT JULEP JAZZ BAND t-shirt (purchased with my allowance) but you’d have to see me in person to absorb the splendor.  Of the shirt.

Here‘s what I wrote about the MJJB in 2013.  I still believe it, and even more so. BATTLE AXE — never mind the forbidding title — is a great consistent pleasure.

Posted in "Thanks A Million", Bliss!, Generosities, Hotter Than That, Pay Attention!, Swing You Cats!, That Was Fun!, The Heroes Among Us, The Real Thing, The Things We Love, Wow!

I haven’t had a librarian say “Shhhhhh!” to me since junior high school, so I know that stereotype might be long gone. But it’s lovely to see a library expand into sweet, swinging music, as it does here.

The wonderful musicians are the warm, easy singer Laura Windley and the Mint Julep Jazz Band: Lucian Cobb, trombone; Paul Rogers, trumpet; Aaron Hill, alto sax and clarinet; Keenan McKenzie, tenor sax and clarinet; Ben Lassiter, guitar; Aaron Tucker, drums; Jason Foureman, string bass. They perform the magical time-travel of bringing a 1938 Cotton Club show with an Ellington small group to the library in Greensboro, North Carolina (videos shot by Our State magazine). I’m very happy to see and hear this, and I am sure you will like it / them, too.

ROCK IT FOR ME:

and a rollicking instrumental invention (I think of the John Kirby Sextet in its 1943-44 guise plus gallons of coffee) called MIAMI BOULEVARD:

And here is the band’s website. If they come to the library, what could prevent them from coming to you?  Or the reverse.

Posted in "Thanks A Million", Bliss!, Generosities, Hotter Than That, Ideal Places, It's All True, Jazz Titans, Pay Attention!, Swing You Cats!, That Was Fun!, The Heroes Among Us, The Real Thing, The Things We Love 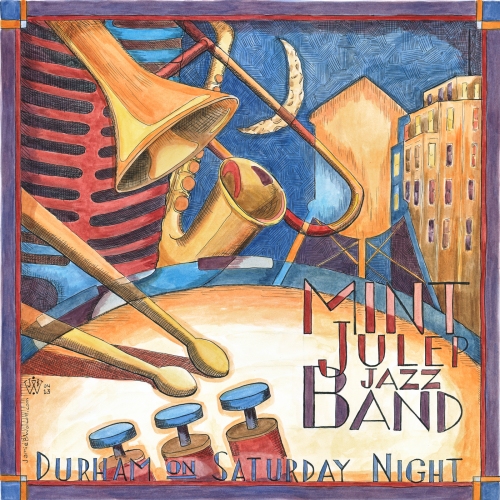 A new CD, DURHAM ON SATURDAY NIGHT, by the Mint Julep Jazz Band, featuring the excellent singer Laura Windley, is a honey.

The MJJB is a small hot group — well-versed in playing for dancers, so they set swinging tempos and stick to them.  Their ensemble work is beautifully precise without being stiff, and they really understand the subtle mysteries of swing rhythm.  And the solos are just fine: not only can these young folks energetically pretend that 1941 isn’t really gone, but they can launch their own inventive solos time after time.

One of their main inspirations is youthful Ella Fitzgerald and the small group out of Chick Webb’s band — The Savoy Eight — and they evoke that sound perfectly without turning out pale note-for-note copies of the records.  I heard evocations of Sandy Williams and Sidney Bechet, but also Al Grey and Howard McGhee.

The repertory also looks with affection at the Ellington small groups and Victor band, the Kirby Sextet, the Ink Spots, the Basie band of the same period (I really welcome hearing JIVE AT FIVE, and the MJJB swings it the best way.)

They also find rather obscure pop tunes — which work!: GET IT SOUTHERN STYLE, ONE GIRL AND TWO BOYS, and there’s a nifty original, MIAMI BOULEVARD.

The excellent young musicians on this disc are Lucian Cobb, trombone; Laura Windley, vocals and glockenspiel; Aaron Hill, alto saxophone / clarinet; Keenan McKenzie, tenor saxophone / clarinet; Jared Worford, guitar; Jim Ketch, trumpet; Jason Foureman, string bass; Aaron Tucker, drums.  They aren’t restricted to the world of 1937, but there are no excursions into Sonny Rollins on a Swing chart, if you know what I mean.

“Those boys rock,” the folks at the Savoy would have said.

Laura Windley is a special pleasure.  Many youthful singers in the “swing dance” scene have memorized the gestures of their idols — listening to the records so many times that they can mimic those Vocalions — and they, women and men, dress beautifully.  But as singers they lack their own personalities.  All gown, no voice.

Laura’s got her own sweet style with a serious rhythmic underpinning: if she were handed a song she’d never heard before, she could do it convincingly without echoing anyone else.  Her rich voice reminded me of young Ella — that hopeful, wistful, asking-for-love quality — but she can turn corners at a fast tempo, as she proves on the CD’s closer, the band’s romping version of Lil Armstrong’s HARLEM ON SATURDAY NIGHT.

Here’s a small sample from a band-within-a-band:

What you will hear on the CD will convince you that — like Swing itself — the Mint Julep Jazz Band is here to stay.  And that is very reassuring news.

Visit them, hear more from their CD (it’s also available on iTunes and CD Baby), and follow them here.

Posted in "Thanks A Million", Bliss!, Generosities, Hotter Than That, Pay Attention!, Swing You Cats!, That Was Fun!, The Heroes Among Us, The Real Thing, The Things We Love