ROY HAYNES, AT 26, UNDERCOVER IN DIXIELAND

(A note to readers: if any member of the Woke-Jazz-Patrol is offended by my use of the “D” word, please note it is historically accurate here — this band is announced as playing “Dixieland” by Nat Hentoff, a most energetic spokesman for all kinds of humane equality.  So please fuss elsewhere. You’ll miss out on some good music while you’re fussing.)

The greatest artists are often most adaptable to circumstances, while remaining themselves.  No working musician I know can afford much aesthetic snobbery, so if Monday you are playing with your working band, and Tuesday is a Balkan wedding, and Wednesday an outdoor cocktail party . . . the checks or cash still work the same. 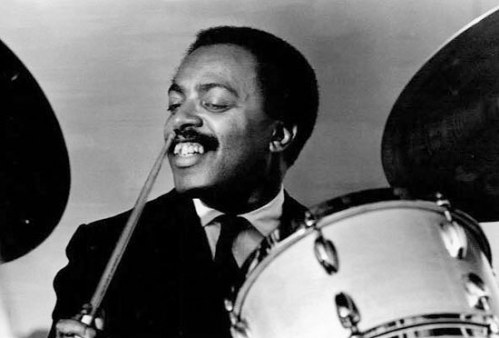 Roy Haynes, born March 13, 1925 — thus 96 this year — began his recording career with Luis Russell’s big band in 1945 and played many sessions as the chosen drummer for Lester Young, Bud Powell, and Charlie Parker.  I don’t think we expect to find him soloing on ROYAL GARDEN BLUES.  Yet he does.

What we have here is a half-hour broadcast from George Wein’s “Storyville” club in Boston, on February 22, 1952 — young Mister Haynes was not yet 26.  The band is George Wein, piano; John Field, string bass; “an anonymous drummer’; George Brunis, the guest star; Ruby Braff, cornet; Al Drootin, clarinet. 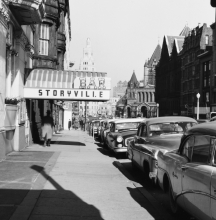 Musically, this may take time to get used to: Brunis shows off, musically and comically, overshadowing the band at first.  I don’t know if Roy was filling in for Marquis Foster or Buzzy Drootin — for the week or for the broadcast?  Brunis fully identifies him at 16:52.  Hentoff tells the story that just before the broadcast, Brunis told him, for reasons he explains on the air, “Turn the name around,” so he is announced as “Egroeg Sinurb,” not easy to do on the spot.

Lively music, and no one cares what name it’s called.  No doubt it was just a gig, but it sounds like a fun one.  And how nice it is that both George Wein (born October 3, 1925) and Roy are still with us.

Posted in "Thanks A Million", Bliss!, Generosities, Hotter Than That, Ideal Places, Irreplaceable, It's All True, Jazz Titans, Mmmmmmmmmmmmm!, Pay Attention!, SURPRISE!, Swing You Cats!, That Was Fun!, The Heroes Among Us, The Real Thing, The Things We Love, Wow!

I’m always intrigued yet sometimes puzzled by the waves of interest in jazz figures that I can discern in the searchers who find this blog.  I’m thrilled to know that somewhere, people yearn to know more about the obscure, “al drootin,” or “bernard addison.”

But often the curiosity (as tabulated by search engine visits) has been both odd and sad.  It feels as if unknown people want badly to put large figures into tiny labeled boxes.

I note with discomfort the morbidly voyeuristic fascination with Billie Holiday unrelated to her music, as documented in many inquiries about her last husband, Louis McKay, about heroin (some searchers have gotten the threads tangled and search for “ella fitzgerald heroin death”), as well as “billy holiday nude” and “how much did billie holiday weigh,” which I find both inexplicable and painful.

More recently, I’ve noted a consistent fascination with Jo Jones.  That in itself would cheer me up, but it seems to grow out of one legend connecting Jo — disdainful, furious — with a youthful and unprepared Charlie Parker.  I wrote about that incident in 2011 here.  (Do people still take Clint Eastwood’s BIRD, where this incident is a repeated narrative thread, as an accurate historical record?)

I saw and heard Jo Jones often in person between 1971 and 1982, and although he was not a predictable individual, what I remember about him is more than the potential for violence, as I have written here.

Jazz enthusiasts and makers of myth apparently need to simplify; they take pleasure in flattening out complex individuals into single iconic gestures, as if making plastic action figures out of them. I imagine a series of dolls sold at giant toy store.  Buy them.  Trade them.  Collect the set!  Here’s Billie Holiday with a needle in her arm or knocked to the ground by her man.  A plastic Louis Armstrong grins and sweats.  In another box, Miles Davis scorns the audience.  Count Basie strikes a single note.  Duke Ellington, in an electric-blue suit, woos a woman.

And now, Jo Jones imperiously humiliating Charlie Parker — complete with tiny gold cymbal flying through the air as if to decapitate the boy who has presumed to enter the world of men.

And then there was the unpredictable deity who commanded the ocean, summoning cosmic rhythms.  His outward appearance — someone you could see on the subway, the compact balding man wearing short trousers that revealed white socks — was only a guise put on so that he could pass among mortals.

The sounds Jo creates — I use the present tense intentionally — will outlast any concocted myths, searchers and search engines.

And if future cosmologists discover that the Basie rhythm section was and is really the music that animates the universe, it would explain the durability of this cosmos that some people have tried so hard to destroy.

Posted in "Thanks A Million", Bliss!, Generosities, Irreplaceable, It's A Mystery, It's All True, Jazz Titans, Pay Attention!, Swing You Cats!, The Real Thing, The Things We Love

First, a story from the man I call The Swing Explorer — the magnificent saxophonist Joel Press:

Buzzy Drootin spent his final decades in the Boston area, initially, with brother Al’s excellent Dixie band at the Scotch and Sirloin (Al rescued him from a day gig at Manny’s Music Store in New York City), and later on the Cape and at Sandy’s Jazz Revival in Beverly, Massachusetts.

When Sandy’s reopened in the Eighties, Bob Wilber led a band which included guitarist Gray Sargent, trumpeters Jeff Stout and Dave Whitney, trombonist Phil Wilson, tenor saxophonists Art Bartol and myself.  Gray, Jeff, and I played in Buzzy’s quintet throughout the following  summer.

Buzzy retained his love for the music and his sense of humor throughout his final years. When a member of the audience requested a Latin number, Buzzy replied, “We only play American music.”

Second, a video preserved for us by archivist and musician Bob Erwig, of a Wild Bill Davison group performing in Sweden in 1984:

The other musicians are trombonist Bill Allred, clarinetist Chuck Hedges, pianist Bob Pilsbury, and bassist Jack Lesberg.  Listen to Buzzy behind the first choruses of Bill and Wild Bill, and his work in the final chorus.  You can’t hear Buzzy’s trademark growl-roar as well as you should, but the joy on his face is vivid, his energy is audible, and his pulse is wonderful.

Here’s a picture of a very fine jazz individualist, born one hundred years ago today.  How many people will recognize him? 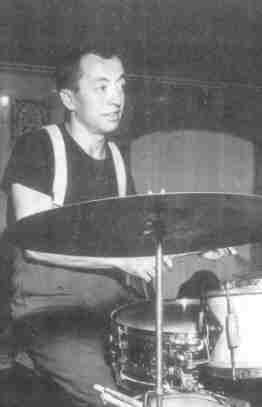 “That’s BUZZY DROOTIN!” I hear some of my readers saying.  Right you are.

I was lucky enough to see him at close — sometimes deafening range — in 1972, at the Sunday afternoon jam sessions run by Red Balaban at Your Father’s Mustache.  We sat right up in front of the bandstand, so Buzzy and his drums were about ten feet away, and his characteristic snare and ride-cymbal work drove the band.  His playing wasn’t fussy; he didn’t make aural jokes as did Jo Jones — but his tempos never faltered, and he had immense energy.  His sound was entirely his own, and I can still hear and see in my mind’s eye the simultaneous open-mouthed sounds (somewhere between a roar and a growl) that he made in the last sixteen bars of his solo.

His intensity was remarkable: I never saw George Wettling or Dave Tough in the flesh, but Buzzy had some of that same “I don’t care!” energy and ferocity.  Yet who remembers him today?

Kevin Dorn met Buzzy and celebrates him in his own playing, of course.

I would like to take credit for remembering his birthday, his centenary, but I have to give credit to Confetta Ras and her magnificent ON THIS DAY IN JAZZ AGE MUSIC website (one of the most generous cornucopias I’ve ever seen) for reminding us all of what April 22 is all about (http://jazzagemusic.blogspot.com/).

P.S.  I know I have among my readers not only people who’ve heard Buzzy but also those rare folks who have played alongside him.  Comments and celebrations, anyone?