NO JAM TODAY (AT SYMPHONY SPACE)

I opened the January 26, 2009, issue of The New Yorker to the advertisement that sits contentedly between pages 32 and 33.  It describes, in brief, events taking place throughout February at Symphony Space in their month-long “1939 Project: American Arts At A Turning Point.”  The full schedule is available at www.symphonyspace.org/1939. On this page, one can see programs devoted to 1939 cinema, popular and classical music, fiction, “American culture in context,” “the pulse of 1939,” and more.  Kirk Nurock, Marion Cowings, Eisa Davis, Sara Laimon, Robin Aleman, Dawn Clement, Jody Sandhaus and others will play and sing.  Famous names — E.L. Doctorow, Robert Dallek, Dick Cavett, and Leon Botstein — will speak, moderate, and direct.  And there’s more.

But I have to say that before I saw this advertisement, I had heard intriguing rumblings about these programs: the names of Ellington and Basie had been invoked as artists central to the culture of 1939.

But no Ellington or Basie did I see on this program.  I looked closer, and found something . . . .

Kick up your heels to the sounds of Glenn Miller, Tommy Dorsey, Gene Krupa, and other big band favorites at this community dance-along on the stage of the Peter Sharp Theatre.”

Forgive me if I seem ungrateful.  I know that pop music of the Swing Era was transmitted for free — recordings and live broadcasts — on radio coast-to-coast in 1939, so I suppose this evening is someone’s idea of “Juke Box Saturday Night.”  But to me it seems cheap and inadequate.  The absence of live 1939-tinged jazz on such a program is annoying, to put it politely. I mean no disrespect to the singers and musicians Symphony Space has already hired and advertised; I am sure that they will sing and play with abandon and ambition.  But . . . .

Were the project directors at Symphony Space unaware that 1939 was a watershed year in live jazz?  Charlie Christian joined the Benny Goodman band; Jimmy Blanton joined Ellington; Lester Young was electrifying listeners in the Basie reed section.  Eddie Condon was creating jam sessions at the Friday Club; Alistair Cooke was announcing other sessions for the BBC; a young Charlie Parker was finding his wings; Dizzy Gillespie was already surprising musicians; Art Tatum already had intimidated everyone; Coleman Hawkins returned from Europe and recorded “Body and Soul”; Louis Armstrong was at one of his many artistic peaks.  An underfed singer from Jersey named Sinatra made his first recordings.  I could go on, but you get the idea.

I know, of course, that such projects are broad in scope and often narrow in budget.  But I have seen jazz concerts put on by the Sidney Bechet Society at this very Symphony Space, so I would guess that such an event was within the realm of possibility. And, to loosely paraphrase Allen Ginsberg’s HOWL, “I saw the best musicians of my generation playing for the tip jar, playing fifty-dollar gigs all over town.” I’m no impresario, but if you gave me a five-hundred dollar budget, I could put on the finest impromptu 1939 jam session you’d ever seen or heard.  (No music stands, by the way.)  I could think of twenty-five imensely talented and under-utilized instrumentalists and singers, each of whom could embody the creative pulse of 1939 in sixteen bars.  But they’re not on the program.

Did the famous names on the program eat up all the funds?  Did the producers decide that it was important to have live classical music and live singers, but assume that jazz could be taken care of by someone with a well-filled iPod?  I don’t know.

Once again, live jazz has the door shut in its face.  And, ironically, jazz of this era is often dismissed as “no longer representative of American culture,” the outdated music of white-haired folks deep in nostalgia.  Surely some place could have been found for it during a month-long project.

Two particularly endearing compact discs have arrived, and I haven’t stopped playing them. They’re on the Swedish Kenneth label, the jazz-child of the jazz scholar and producer Gosta Hagglof, who also happens to be one of the world’s most fervent Louis Armstrong fans and specialists. (His site, “Classic Jazz Productions,” is on the blogroll to the right.)

For forty years now, Gosta has been producing records and CDs of heartwarming jazz, featuring Maxine Sullivan, Benny Waters, Kenny Davern, Doc Cheatham, and others, alongside Swedish jazz stars, including the quite spectacular cornetist-trumpeter Bent Persson, reedman Claes Brodda, and others. These sessions have an inimitable looseness, somewhere between live performances (think of the St. Regis jam sessions without Alistair Cooke) or the slightly more formal Teddy Wilson Brunswicks, lyrical and propulsive. Here’s a much younger Gosta greeting Louis at the airport in 1965: the warm feeling passing back and forth is immediately evident. 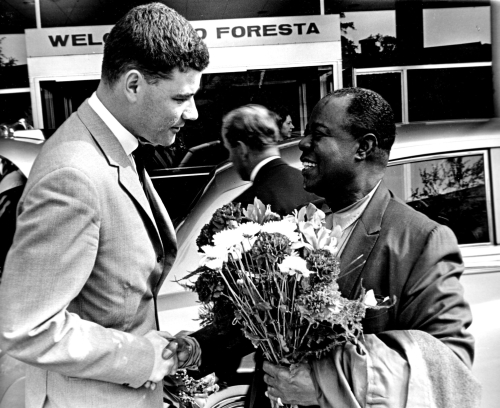 Now, Gosta has issued Dick Cary: The Wonderful World of Hoagy Carmichael (Kenneth CKS 3410), and A Tribute to Billie Holiday: Doc Cheatham and his Swedish Jazz All Stars featuring Henri Chaix (CKS 3407). You might initially think that there have already been more than enough tributes to Hoagy and Billie, but these discs are stirringly good.

Dick Cary was one of those musicians who didn’t get recognized for his talents, perhaps because he had so many of them. He was the pianist at Louis’s Town Hall Concert: his replacement was Earl Hines, which is an honor in itself. He also was a beautifully-focused trumpeter, the only soloist I know on the Eb alto horn (the “peckhorn”), a fine composer and arranger. Cary valued variety and tone color: his piano playing encompassed Teddy Wilson and Willie “the Lion” Smith to create a seamless mainstream idiom. His trumpet playing reminds me of a cross between Harry Edison and Bobby Hackett, with touches of Joe Thomas, and no one sounded like him on the alto horn.

So the listener gets good value, to say the least, with any Cary performance — and the Hoagy performances show him off wonderfully. The arrangements are subtly varied, sometimes transforming the material: “What Kind O’Man Is You,” memorable only because Mildred Bailey sang it on a 1929 record, becomes a slow, swaying drag here, as does “Snowball.” (Most Carmichael tributes stick to his half-dozen most famous songs: this one doesn’t, without becoming esoteric.) And Cary loved the momentum that a rocking jazz band could create: his “Harvey” (a loose sketch on “Dinah,” for the most part) and “Riverboat Shuffle” build up a fine head of steam. The ballads are winsome, especially the never-perfromed “Kinda Lonesome.” It’s also a tribute to the man who did so much to bring Hoagy into the jazz consciousness, in “Ev’ntide,” “Lyin’ to Myself,” “Rockin’ Chair,” heart-on-sleeve evocations of the great Armstrong recordings, with Bent Persson in full flower. It’s one of those CDs that I have been playing from start to finish without getting bored, and there’s a percussion break in the middle of “Riverboat Shuffle” that makes me laugh out loud. What more could anyone want? How about three bonus tracks: two evoking the Ellington Brunswicks, “Kissing My Baby Goodnight” and “Love Is Like A Cigarette,” which summon up the moody sound of that band. And the CD ends with a bit of brilliant French Quarter jive in Cary’s “Swing Down in New Orleans,” which features the imperishable Doc Cheatham on trumpet and vocal, rolling his R’s extravagantly when he sings “Clar-r-r-r-inet Mar-r-r-r-malade.” Delicious!

Cheatham is in rare form on the Billie tribute, which summons up the atmosphere surrounding her more than being a direct copy of her vocals, which is all to the good. (Billie herself would have been displeased by the many feline types yowling their way through “Fine and Mellow”: better they should have stayed in the litter box.)

On this CD, the band is led by the brilliant swing / stride master Henri Chaix, whose accompaniments are a joy on their own. There is a wonderful two-tempoed rendition of “I Wish I Had You,” which Billie fanatics will remember as a title where she sings “I whoosh I had you,” always a sweetly weird moment. Doc’s climbing trumpet style is beautifully captured — no drum solos, no racetrack solos — and we get to hear him sing “The Gal I Love”:

Wouldn’t miss that for the world! And Doc seems to be having the time of his life, vocally. He sings at the top of his range, as he always did, lending his vocalizing a definitely feminine sound without going into falsetto; he speaks lyrics when the mood was right, and here he even indulges in touches of Fats Waller’s raillery. Even for Doc, these vocals are remarkable. And the instrumental playing on both these discs is wonderful — great rhythm section work and solos. Hagglof’s Swedish marvels come out of the great tradition, fully realized and comfortable within it, but they don’t copy the obvious models or the most recognizable sounds. You’ll hear echoes of Louis and Teddy on these discs, but also small heartfelt homages to Herschel Evans and Sandy Williams.

These are irreplaceable sessions. Gosta has two more CDs with Doc in store for us, which is splendid news. For now, I’m going to keep playing these discs, moving them from the car to the computer to the CD player, so as not to miss any notes.

Posted in Jazz Titans, The Heroes Among Us, The Things We Love