Even though I don’t suffer from a paucity of music to listen to, a highlight of our trips west has been my visits to the Down Home Music Store in El Cerrito (where a week ago I walked away with three records: a compendium of the Barney Bigard-Joe Thomas-Art Tatum sides recorded for Black and White 1944-45; the Xanadu session of Roy Eldridge at Jerry Newman’s, 1940; the French CBS volume of Louis with Lillie Delk Christian and Chippie Hill).  Nineteen dollars.

Not bad, you might say, but it was just a warmup for today’s treasure hunt.

The records listed below ranged from one dollar to five, so the total was slightly over thirty-eight dollars.  Some of them I once had; some I knew of and coveted; others were total surprises.  Most of them I found while standing, but the dollar ones required that I become a small human coffee table.  I was in my element, and no one stepped on me.  (Thirty years ago, New York City had stores like this, but — except for one gem on Bleecker Street — they seem to have vanished.)

MAX KAMINSKY: AMBASSADOR OF JAZZ (Westminster, 2.99), which has no listed personnel, but sounds like an octet — I hear Bill Stegmeyer, Cutty Cutshall, and Dick Cary — and has a wide range of material, beginning with HENDERSON STOMP and THE PREACHER.

KNOCKY PARKER: OLD RAGS (Audiophile, 2.99) which I bought in honor of one of my New York friends who had Professor Parker in college but has never heard him play the piano.

THE LEGENDARY EVA TAYLOR WITH MAGGIE’S BLUE FIVE (Kenneth, 1.99), a recording I have been wanting for years — with Bent Persson and Tomas Ornberg.

SWEET AND HOT (Ambiance, 1.99), a half-speed disc — it plays at 45 — recorded in 1977 and featuring Vince Cattolica and Ernie Figueroa in an octet.

RALPH SUTTON: BACKROOM PIANO (Verve, 1.00): well-played but any Sutton collection that begins with CHRISTOPHER COLUMBUS is something to have.  I remember Ed Beach played tracks from this record on his Sutton shows.

LIVE AND IN CHOLER: THE WORLD FAMOUS DESOLATION JAZZ ENSEMBLE AND MESS KIT REPAIR BATTALION, VOL. 2 (Clambake, 1.00): I nearly passed this one by because of the “humorous” title . . . but when I saw it has Dave Caparone on trombone, I was not about to be deterred by some goofy liner notes.

Worth getting into such an undignified position, I’d say.  Now I will indulge myself by listening to Miss Eva with Bent and Tomas!

I suspect that the Rhythmic Eight is far better known to listeners in the United Kingdom than in the United States — but I hope to rectify that a bit with this post.

They were a small hot unit of players drawn from the best English dance / hot dance bands of the time, and although the musicians were working with pop tunes of the day, their recordings had a good deal of heat and a solid proportion of solo work — with some rewarding influence from the best American hot players of the day — people we know as Bix, Tram, and Red . . .

This tribute, created and performed on Sunday, November 6, at the 2011 Whitley Bay Classic Jazz Party, features Mauro Porro, saxophone and vocal on GIRLFRIEND and ANNABELLE; Andy Schumm, Andy Woon, trumpets; Keith Nichols, piano; Jean-Francois Bonnel, reeds; Martin Wheatley, banjo and guitar; Richard Pite, sousaphone and string bass; Debbie Arthurs, drums, with an appearance by Mike Piggott, violin, on CAROLINE, and a vocal on I”M CRAZY OVER YOU (first recorded in 1928 by the youthful Bing Crosby) by Caroline Irwin.  And some dancers — Bridget and Jonathan — who should be easily recognizable to you by now.

IS SHE MY GIRLFRIEND? (Elin):

WAY BACK WHEN (Elin):

THERE’S A CRADLE IN CAROLINE (Elin):

My tribute to this group is that when I visited Amoeba Music in San Francisco not long ago, I saw a two-CD set on the Retrieval label of the best 48 recordings by the Rhythmic Eight — a set that Mauro had recommended . . . I own it now.  Thanks also to our benefactors, Elin Smith and Flemming Thorbye!

More rewarding than going to the mall in search of the nonexistent record store (now replaced by a kiosk selling baseball caps you can have embroidered with your name, perhaps?).  More personal than bidding and clicking online, it’s my return to AMOEBA MUSIC in San Francisco!

It should say something about the impression this store (and its Berkeley branch) made on me this last summer that I can summon up “1855 Haight Street” without having to think about it.  And the flimsy yellow plastic bag I brought back to my apartment has not been used for any ordinary purpose.  Inside the store the view is awe-inspiring and not a little intimidating for those who (unlike me) collect broadly across the musical spectrum: 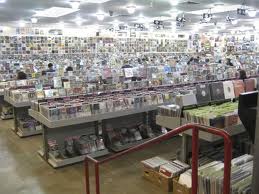 I knew where I was going and my path had only two main oases — leaving aside the cash register at the end.  One delicious spot is sequestered in a corner: several bookshelves filled with albums of 10″ 78 rpm records.  You’d have to be a collector of older music or someone of a certain age to be familiar with this display in its unaltered state.  It still thrills me but it has the odd flavor of a museum exhibit — although I know of no museum where you can purchase the exhibits and take them home.  See if this photograph doesn’t provoke some of the same emotions: 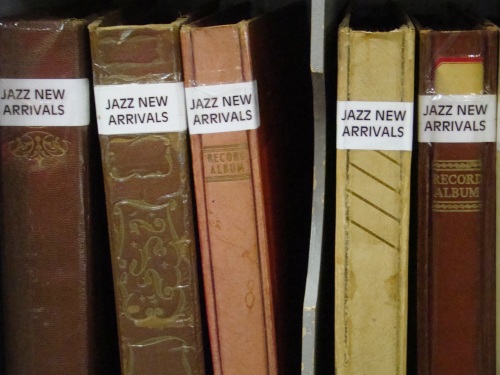 And what do these albums contain?  I’ll skip over the dollar 1941-2 OKeh Count Basie discs, the odd Dave Brubeck 78, the remarkable Mercer Records PERDIDO by Oscar Pettiford on cello, the Artie Shaw Bluebirds . . . for a few that struck particular chords with me:

That one’s to inspire my pal Ricky Riccardi on to his next book!

One of the finest front lines imaginable — a pairing that only happened once. 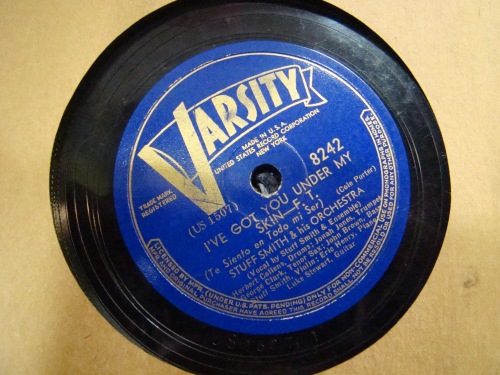 The right Stuff . . . for Anthony Barnett. 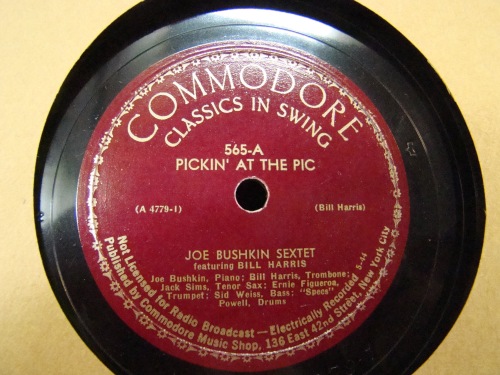 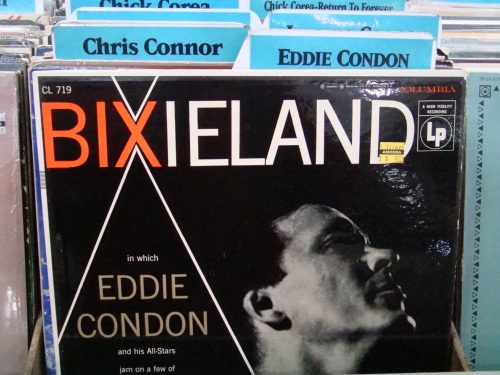 In honor of Maggie Condon, Stan and Stephen Hester . . . and I didn’t arrange the records for this shot.  When was the last time you entered a record store with its own Eddie Condon section?

It would have been disrespectful to confine myself to taking pictures and not buying anything (also, enterprises like this need some support to stay in business), so I did my part.

The reverse of a Johnny Guarnieri tribute to Fats Waller, autographed to “Ed,” whom I assume played a little piano. 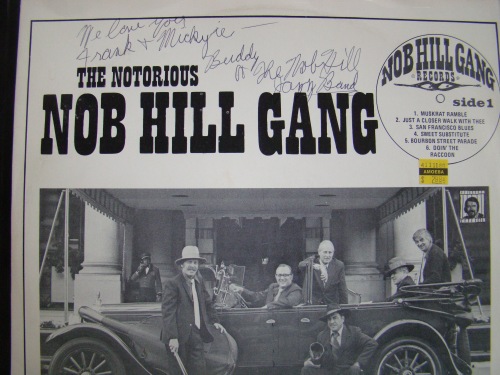 The NOB HILL GANG might look like another San Francisco “Dixieland” band, but any group with Ernie Figueroa on trumpet and Vince Cattolica on clarinet demands serious consideration.

a double-CD set on the Retrieval label of the Rhythmic Eight, in honor of Mauro Porro, whose set at the 2011 Whitley Bay paying homage to this band was memorable;

a Leo Watson compilation CD  on Indigo — just because I couldn’t leave it there;

the Billy Strayhorn LUSH LIFE compilation on Doctor Jazz, with a fine small group whose horns are Clark Terry and Bob Wilber.

The end result at the cash register?  Forty-three dollars and some cents.  Worth a trip from just about anywhere.