Before you read a word, listen and be charmed: ROCKY MOUNTAIN ELK RAG.

The three issues contain fifteen songs — and I mean “songs” in the best memorably singable sense — with a few standards, APRIL SHOWERS, and I GUESS I’LL GET THE PAPERS AND GO HOME. The overall effect is, once again, charming — looking backwards to Joe Venuti, Eddie Lang, and Adrian Rollini as well as the Quintette of the Hot Club of France, all of them magically transported to a balcony in the French Quarter — but it isn’t recreation of past recordings or fixed genres. The music meanders as happily as do Andy and his (now-famous) “pandemic puppy,” named Duke Ellington (no, not just “Duke,” if you please.

If I heard that coming out of a speaker somewhere, I would want to follow those sounds! I hope you feel the same way.

And a sweet whimsy based on HONEYSUCKLE ROSE and the notion of “Don’t buy sugar,” but with Montreal pride mixed in, MAPLE SYRUP:

And here are a few more snippets:

It is, as they say, music to my ears.

Posted in "Thanks A Million", Bliss!, Generosities, It's All True, Mmmmmmmmmmmmm!, Pay Attention!, Swing You Cats!, That Was Fun!, The Heroes Among Us, The Real Thing, The Things We Love

I first encountered Andy MacDonald on Facebook — a shy but amiable presence who liked my postings.  We had similar tastes, so we actually had a conversation (now, how nineteenth-century is that?).  Jazz guitarist, songwriter, singer — and for once that latter combination of words did not inspire fear.

He shared his new three-song opus, SWEET SOLITUDE, and I liked it very much, so much so that I am encouraging you to take a sniff, or several, at it.

But first.  Andy and “pandemic puppy,” whom he’s named Duke Ellington, the inspiration for one of three parts of the Suite, which veers delightfully from hot small-band swing, to Lang-Venuti frolic and meditation, to a song which I think of as our century’s Tom Lehrer goes to Eddie Condon’s.

But every blog should have a photograph of a cute puppy and his happy owner: 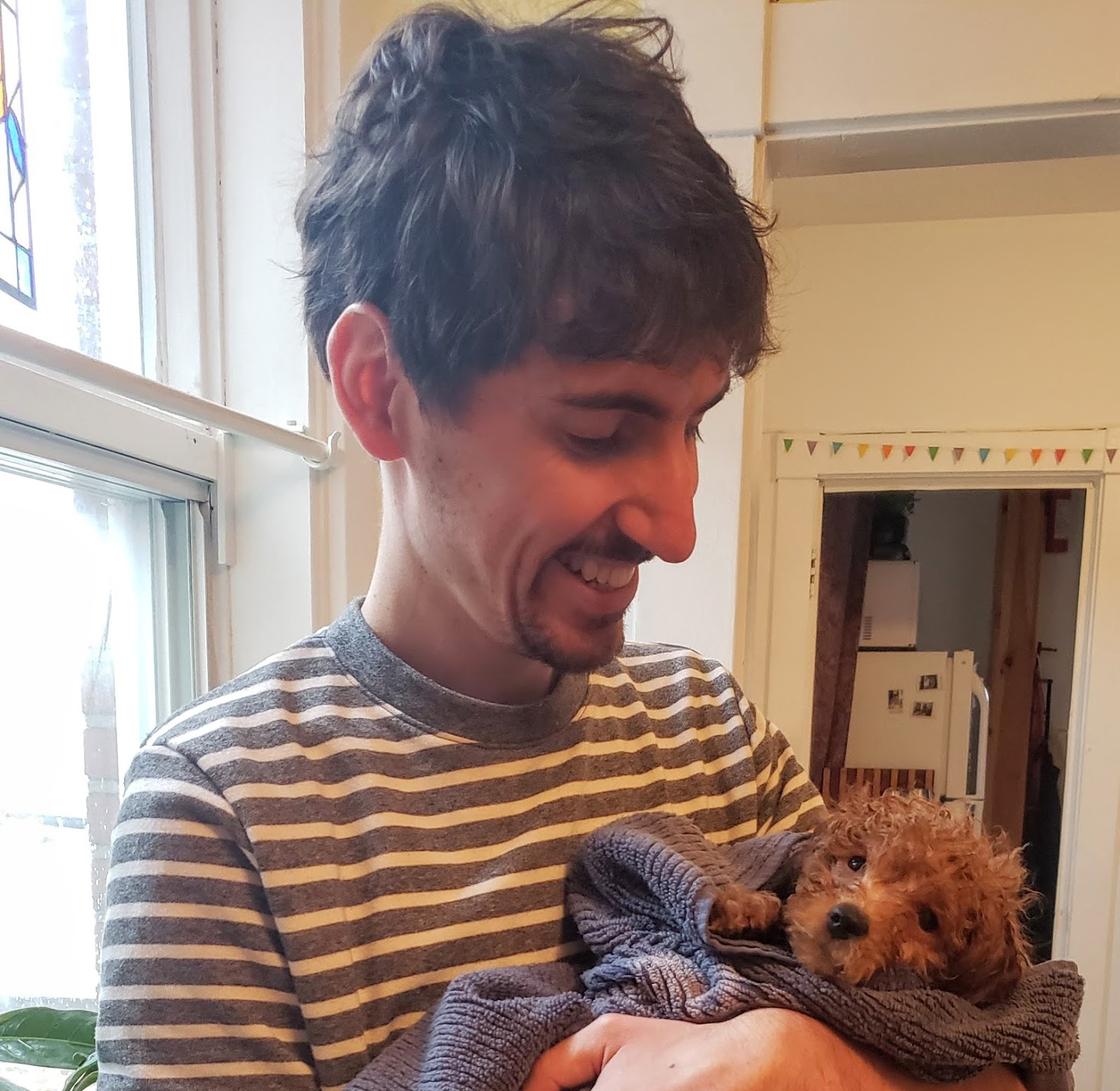 One is not enough: 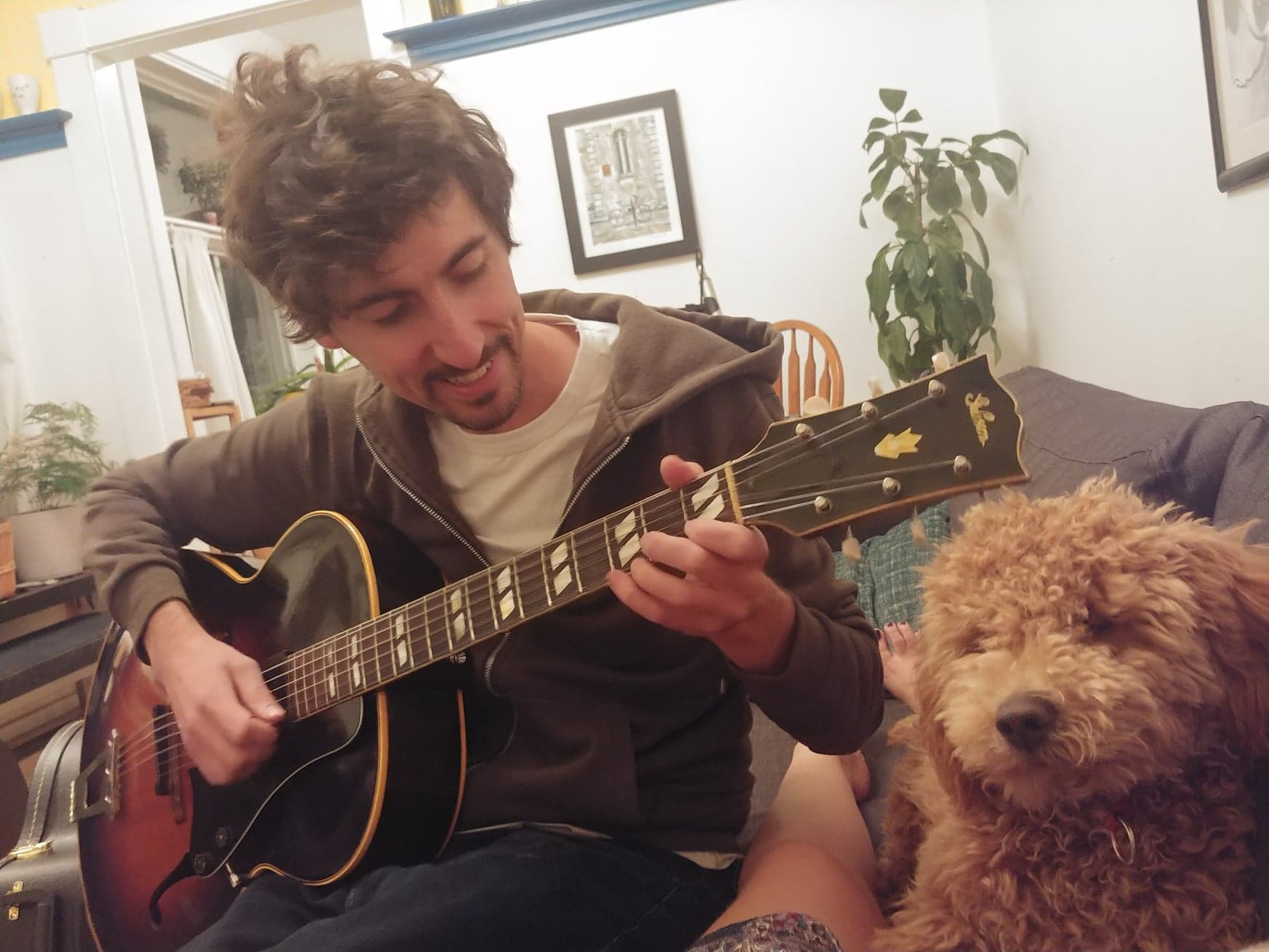 Here are two videos from the Suite, the first asking the musical question, “Will everything be all right soon?” featuring Andy, guitar; Drew Jurecka, violin:

I’d asked Andy to write something about himself to introduce himself to the mass of people who hadn’t yet realized what was lacking in their lives, and here’s his verbal opus:

I’m a Canadian guitarist, banjoist, and vocalist playing hot jazz in a cold country. I’m from Toronto, but I decided Toronto wasn’t cold enough so I moved to Montreal in 2015. I’ve played (and taught) jazz in Canada, USA, and Europe and my favourite audience members are swing dancers. Django Reinhardt has always been my greatest influence on the guitar, but recently I’ve been going backwards and getting inspired by the players who influenced Django. Eddie Lang, Joe Venuti, Louis Armstrong, and Fats Waller are my new muses.

My musical mission is to write honestly about profound subjects without taking myself too seriously. I feel like Fats Waller and Marty Grosz take a similar approach. Fats wrote sincerely about heavy stuff like depression, heartbreak and loneliness, yet his music sounds lighthearted and whimsical. His tune Draggin’ my Poor Heart Around (recorded March 13, 1931) opens with the line: «Sweet mama, did you ever hear of depression? Well, that’s what you did to my heart, I’m tellin’ ya!» When he starts his piano solo, he declares: «Oh baby, listen to my pleadin’ on the ivories!» My 2019 album Asking For A Friend is a heartbreak album that for me is comedic and upbeat in its tone.

I love drawing inspiration from classic hot jazz recordings to create new works. The balancing act of respecting the tradition while saying something original is a tricky challenge. Luckily, there seems to be a new resurgence of interest in this music so even in Canada, it’s possible to find talented players to help bring the music to life. In the “before times”, I ran a weekly hot jazz jam in a dive bar with cheap whiskey and free pool. I can’t wait to get back there!

Suite Solitude is a collection of three songs brought on by the tragedy of social isolation and the COVID19 pandemic. The original idea for the project was to do a real-time, live recording using state-of-the-art software. Well, the software and internet speeds are still about 5 years away from that being feasible, so we recorded it all one track at a time in this order: 1) guitar & banjo; 2) sousaphone; 3) cornet; 4) violin; 5) trombone; 6) voice. Each time, the latest mixdown would be sent to the next player to record so that there could be at least some social and musical interaction.

I wrote about how much my life has flipped upside down since this pandemic began. I lost all my work as a musician and music therapist so it felt like the rug got pulled from under me in a very sudden way. Although the themes are profound at face value, there’s a good deal of comic relief and lightheartedness to the music. For example, when writing about my new puppy, I sing: «Pandemic puppy will help me see when times get rough, you can just say {RUFF} He’s chasing squirrels, he’s chasing ducks, he gives no [BARK]s!»

You can purchase the music on Bandcamp for $8CAD: https://andymacdonald.bandcamp.com/album/suite-solitude.

Consider yourself encouraged to do such a thing — I mean purchase the music on Bandcamp.  With or without cute puppy, Mr. MacDonald shows great promise and I would like to see his talents encouraged.

Posted in "Thanks A Million", Bliss!, Generosities, It's All True, Jazz Worth Reading, Mmmmmmmmmmmmm!, Pay Attention!, SURPRISE!, Swing You Cats!, That Was Fun!, The Heroes Among Us, The Real Thing, The Things We Love, Wow!