THE AU BROTHERS “TAKE OFF!”

Readers of JAZZ LIVES know Gordon Au (youthful brass Maestro / composer / arranger / occasional vocalist) but may be less familiar with his gifted younger siblings — Justin (trumpet) and Brandon (trombone).  They’ve played jazz festivals as the Au Brothers Jazz Band, keeping family ties strong with the addition of Howard (Uncle How) Miyata on tuba.  Friends who round out the band are guitarist / banjoist / vocalist Katie Cavera and swing percussionist Danny Coots.  On paper, especially for those used to the “traditional” line-up, this combination might look unorthodox, but it works beautifully.  I can prove it! 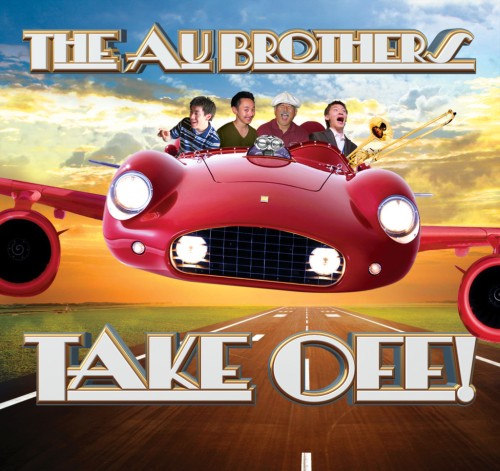 The CD features a few chestnuts given new life — JELLY ROLL (with a vocal by Uncle How that is reminiscent of a good bakery) and LIMEHOUSE BLUES, several songs from a century ago — WHEN FRANCIS DANCES WITH ME (vocal by the choreographic Katie) and CENTRAL, GIVE ME BACK MY DIME (a song new to me but one that gives Brandon an opportunity to rail at the limitations of the “new” technology when it’s involved in romance) — and originals by Gordon which show his range from wooing to hilarious, from swing to comedic grotesquerie: PISMO BEACH PARADE, STINKY FEET BLUES (not what you might expect), CAPITAL-BOUND, HOW COULD I SAY THAT I LOVE YOU, TANGO OF LOST LOVES, BROOKLYNBURG RAG — and a wonderful collage of themes from jazz classics, BIG CHIEF DADA’S AXE OF PLENTY STRAIN.  The interplay between the horns is marvelous; the rhythm section rocks, and the whole enterprises sits comfortably somewhere between the Hot Five, Gil Evans, Tom Lehrer, and Spike Jones, the balance shifting from song to song.

You can find out more about the band (their schedule of future appearances) and the CD here, and the Brothers have generously posted many videos of the band on this site.

I will take this opportunity to add to the Brothers’ video hoard — for current watchers and future generations as well as life forms on other planets who might be vibrating to the gigabytes in interstellar space — with some engaging evidence of the ABJB in action at the 2013 Jazz Fest by the Bay in Monterey, California. Gordon’s casual wardrobe was especially arranged by American Airlines’ baggage handlers.

HOW CAN I SAY THAT I LOVE YOU?:

WHEN FRANCIS DANCES WITH ME:

Posted in "Thanks A Million", Hotter Than That, Ideal Places, Jazz Titans, Pay Attention!, Swing You Cats!, That Was Fun!, The Heroes Among Us, The Real Thing

THE BOYS AND THE BAND: JUSTIN and BRANDON AU VISIT HIGH SIERRA (Sacramento Music Festival, May 27, 2012)

Who says that hot jazz is solely the purview of a generation of elder statesmen?  Certainly not the young brassmen Justin (trumpet) and Brandon Au (trombone), who paid a social call to the High Sierra Jazz Band at the Sacramento Music Festival on May 27, 2012.

Justin and Brandon joined leader / reedman Pieter Meijers, their Uncle How (Howard Miyata on trombone and vocal), Bryan Shaw on trumpet, Stan Huddleston on banjo, Bruce Huddleston on piano, Earl McKee on sousaphone and vocals, and Charlie Castro, drums — for a program of hot cross-generational jazz and hijinks.

The HSJB began with a nineteenth-century favorite, sung with great honest feeling by Earl, THE OLD SPINNING WHEEL:

Then, one of the many animal-themed compositions dear to the Original Dixieland Jazz Band and, a bit later, Bix Beiderbecke, OSTRICH WALK:

Justin, Brandon (vocal), and Pieter swing out on NAGASAKI:

And, as an aside, here is what I believe to be the performance — captured for posterity — that Peter refers to.  A slippery composition, CAPITOL-BOUND, performed at the Pismo Jazz Jubilee by the Sea — October 28, 2011 — by Justin, Brandon, Gordon, Uncle How, Danny Coots, and Katie Cavera:

One of the High Sierra’s patented specialties, FROM MONDAY ON, with a vocal by Earl and a five-horn recreation of Bix’s solos at the end:

And, to close, a hot blues for Louis, MAHOGANY HALL STOMP:

Age doesn’t matter in jazz if the spirit is right.

Posted in "Thanks A Million", Bliss!, Generosities, Hotter Than That, Ideal Places, Irreplaceable, Jazz Titans, Pay Attention!, Swing You Cats!, That Was Fun!, The Heroes Among Us, The Real Thing, The Things We Love, Wow!

The family that plays together . . . creates beautiful music.  Here are some more performances by the Au Brothers Jazz Band from their October 28, 2011, appearance at the Pismo Beach “Jazz Jubilee by the Sea”: for this occasion, the band was Gordon Au, trumpet; Justin Au, trumpet; Brandon Au, trombone / English baritone; Howard Miyata, tuba.  (That’s “Uncle How” to those in the know.)  The friends were Katie Cavera, banjo / guitar; Danny Coots, drums — with a few added surprises.

Let’s start with Gordon’s own PISMO BEACH PARADE — a rollicking march which keeps its flavor no matter if it’s performed far from Pismo — say in Brooklyn, New York:

The Brothers welcomed the hot pianist Jeff Barnhart for a little meteorology in PENNIES FROM HEAVEN — sweetly expounded by Uncle How:

I WOULD DO MOST ANYTHING FOR YOU was an occasion to welcome other playful folks to the stand: Bob Draga and Peter Meijers, clarinet; Jeff Beaumont, alto sax — a reed section to match the Au /  Miyata brass:

Two satires follow — a slightly modified version of ROCKIN’ CHAIR (“Fetch me that ginseng,” is what I believe we hear):

and I’M GONNA SIT RIGHT DOWN AND WRITE MYSELF A LETTER, its Thirties lyrics updated and reconfigured:

Here’s a groovy SHE’S CRYING FOR ME — with an unidentified young washboardist, stage right, in dialogue with Gordon:

In memory of the Eddie Condon Town Hall concerts, a key-changing OLE MISS:

Although this is a thoroughly mischievous band, they play KEEPIN’ OUT OF MISCHIEF NOW (beginning with the tender verse). And, as for the vocal, it’s Crosby, Columbo, and Miyata:

Let’s conclude with a mellow Fiesta for Brass on the theme of STARDUST:

I doubt that I will ever organize a jazz festival in this life — but this band seems supremely good music and good value.  Is anyone listening?

All these nice videos were created by Gene Mondro: thanks and applause to Gene!  The comings and goings of the Au Brothers are ly documented here on “Dolphinhunter,” their YouTube channel.

This is the good stuff.  Give up the multi-tasking for about ten minutes and relax into the sweet and hot sounds of the Au Brothers Jazz Band.

They are Gordon on trumpet / vocal / composition;  Justin, trumpet; Brandon, trombone / English baritone; Howard Miyata (Uncle How), tuba; Katie Cavera, banjo / guitar; Danny Coots, drums.  These four performances were recorded at the Pismo, California, Jazz Jubilee “By the Sea,” on October 28, 2011.  And if you have any skepticism about how the balance would work — four brass, no piano — worry not.  Splendid soloists, great riffers, wonderful team players!

Here’s Gordon’s own romantic rhythm ballad, SOMEHOW THE WORLD HAS TURNED UPSIDE-DOWN, which he sings in a way both unaffected and effective.  The song is straight out of the Thirties but has much more clever lyrics.  Energized playing throughout and good feeling on the stand: see Katie and Danny smiling while Justin and Uncle How explore:

Another surprising composition of Gordon’s is PAVONIS (named for the genus of the peacock).  Gordon’s originals shift and turn as you listen, so I hear in this a moody ballad that could be scored for Bobby Hackett, late Louis Armstrong, or even Johnny Hodges.  But the ABJB — by their sweet understated playing — brings us to 2011, with no rhapsodizing about the past.  And by the end, all I could think of was the words “soaring lyricism” — from the whole band:

I don’t know how old any of the players was when Disney’s THE JUNGLE BOOK appeared on movie screens in 1967, but I would guess it predates a few of them.  Gordon has a not-so-secret fondness for odd Disney songs (many of them neglected classics) and BARE NECESSITIES is one of them.  Brandon not only utilizes his English baritone horn (in a cross-stage series of trades with his uncle) but offers a vocal chorus in the manner of Louis.

And speaking of Louis, this was one of the songs he performed on television that year — was it the HOLLYWOOD PALACE?  I have a very clear memory of watching him sing this ditty — then a man in a bear suit came out from the wings; “bear” and Louis did a few turns and a do-si-do, then the “bear” went back to his cave — perhaps the greenroom.  If you see your hero cutting a rug with a man in a bear suit, you don’t forget it:

To close the session, something familiar — a good old good one complete with hot drum solo!  LIMEHOUSE BLUES with the verse.  And, yes, that riff before Katie solos is indeed an Au-variation on DIZZY ATMOSPHERE:

Californians are so lucky!  (Although we have a firm grip on Gordon here in New York City: I saw the Grand Street Stompers at the Radgast Bierhalle last night, and they were wonderful.  Stay tuned.)

THE FAMILY THAT PLAYS TOGETHER

That’s Gordon (in the red shirt) on trumpet, Brandon on trombone, Justin on trumpet.  Their friends are Darrell Fernandez on bass, Jim Maihack on piano, and Ron Jones on drums.

This video comes from Brandon’s YouTube channel, “Dolphinhunter,” which features other performances by the three Au brothers and an amusing series of “Name That Song” videos.

Posted in Mmmmmmmmmmmmm!, Pay Attention!, Swing You Cats!, The Heroes Among Us, The Real Thing, The Things We Love