I abandoned my adult responsibilities last Thursday to hear the Jon De Lucia Octet at City College, and I am so glad: this performance was an oasis. 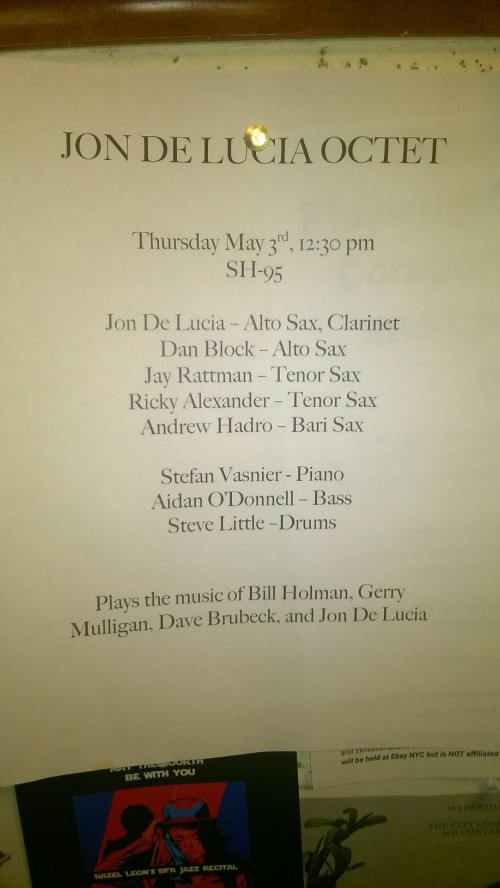 Jon’s group, in existence for slightly more than two years, is a flexible, swinging chamber group devoted to the music-for-saxophones of Gerry Mulligan, Lee Konitz, Jimmy Giuffre, Ted Brown, Bill Smith, Alec Wilder, the Dave Brubeck Octet, and Jon’s own arrangements and compositions.  I’ve been following Jon and the Octet around New York since their inception, and have always felt rewarded.  Here is a sample from March 2017.

Perhaps it no longer applies, but it used to be fashionable to characterize such music as “cerebral,” to some, a euphemism for chilly aural architecture, jazz drained of untidy emotions, art from the neck up.  Not true for the Octet, which is a warm, mobile band, always with a generous offering of improvised solos.  You’ll hear and see for yourself.

If you have an established prejudice against what is perceived by some as “cool,” please take a visit to PRESERVATION, DREAMILEE, DISC JOCKEY JUMP . . . . and then re-assess.

Jerome Kern’s PICK YOURSELF UP (I think of Fred Astaire pretending to be clumsy) arranged by Jon:

The Gershwins’ TREAT ME ROUGH, from GIRL CRAZY, arranged by Dick Hyman for a Trigger Alpert record date:

The gorgeous PRELUDE, by Dave Van Kriedt, originally for the Dave Brubeck Octet:

DREAMILEE, Lee Konitz’s solo / variations on I’LL SEE YOU IN MY DREAMS, arranged by Jon:

PRELUDE TO PART FIRST, a Baroque jazz fantasy by Jon, which I associate with his new  Bach Shapes book:

Cole Porter’s very pretty LOOKING AT YOU (I think of Lee Wiley’s 1940 recording with Bushkin and Berigan) arranged by Jon.  Dance music for very hip couples:

and a memory of a vanished New York City subway-system entrance machinery, TURNSTILE, again composed by Mulligan and arranged by Holman:

Jon’s Octet — with the splendid Ted Brown — will be releasing their debut recording, a live performance from their first recital — on Neal Miner’s noble Gut String Records — this summer.  Expect to hear more about it here.