That was the general mood of today’s hour-long conversation sponsored by the New York Public Library for the Performing Arts.  “Memories of You,” which was a three-way chat among Martin E. Segal (now ninety-three and a Lincoln Center luminary, emeritus) and Phoebe Jacobs (now ninety, and a jazz / show business beacon) — moderated by George Boziwick.  Because both of the participants had known Benny Goodman (“Mr. Goodman” to Ms. Jacobs) as a friend and as a non-musical employer, there were no stories about the King of Swing being a difficult boss or a perfectionistic bandleader.  So we heard about Benny the pioneer against racism, the salmon-fisherman and sports enthusiast, the generous man who paid Teddy Wilson’s doctor bills and sent money to Wilson’s wife for a year after Teddy’s death, the fond parent (daughters Sophia and Benjie were in the audience, as was a youthful Goodman grandson, as was Mercedes Ellington), loving husband, a son devoted to his parents, a thoughtful brother.

It was as if the afternoon had been arranged to get rid of those wicked stories about Benny’s inability to deal with people — especially his sidemen and women — decently.  And his famous obliviousness was only touched on once, in Phoebe’s story about Goodman’s having his fly open on the Dick Cavett Show.

But several things rescued the afternoon from amiable blandness.  One was watching Segal and Jacobs, people who won’t see ninety again, sharp, witty, and totally in command of their material and of the audience.  Enthusiastic, too, as Lorna Sass’s portrait of Phoebe in full flight proves: 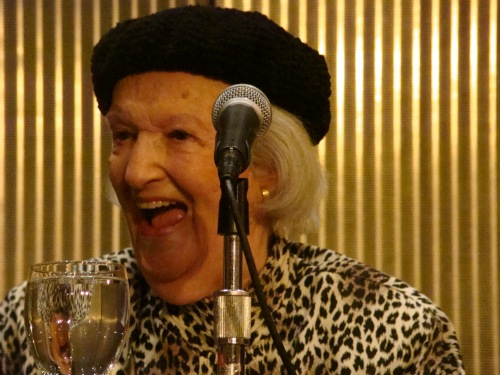 And Martin Segal, sly rather than ebullient, kept on reminding me of someone.  This photo doesn’t entirely capture the resemblance, but it dawned on me that Segal looked a good deal like a shorter version of his friend Benny: 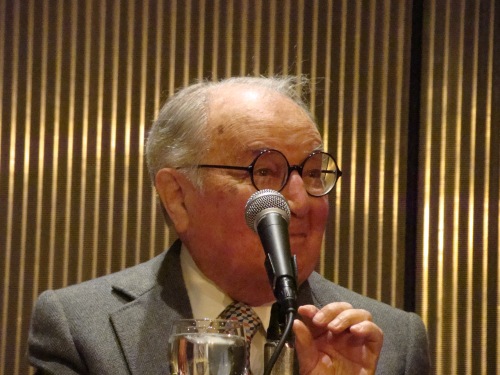 Finally, two other highlights — one before the conversation, one after.  When the Beloved and I sat down, an elegantly dressed woman in a dark paisley jacket chose to sit next to us and said that she had met Goodman at a Segal party (she had been Segal’s right-hand woman when he created the Film Society of Lincoln Center).  Sallie Blumenthal, for that is her name, had many charming stories — most of them about the actor Louis Calhern, a generous and gracious man.  We never got back to her Goodman story, but now I know that Calhern was a sweet man who remembered everyone he had ever met.

After the conversation, we went to the third floor of the library to look at their Goodman memorabilia — a quite impressive collection of things that were almost all new to me: a Gil Evans chart for the song DELIA’S GONE, another, earlier chart with Mel Powell’s name penciled in; photos that I hadn’t seen — all curated by a quietly industrious young librarian whose first name is Jonathan (I apologize for not getting his full name).

A pleasant afternoon, with all the usual (occasionally venomous and hilarious) Goodman gossip put to rest for a change.  Next week, slightly later in the afternoon, Goodman’s musical legacy — as opposed to his social one — will be celebrated and considered by a sextet of musicians who are unfamiliar to me.  But I’m sure they will swing: Goodman’s music is a powerful inspiration!