WE INTERRUPT OUR REGULARLY SCHEDULED BLOGGING

No, JAZZ LIVES is not going away.  Nor is there some crisis.  Nor am I asking for money.  However, I would like my viewers to devote themselves to what follows, which will take perhaps ten minutes. 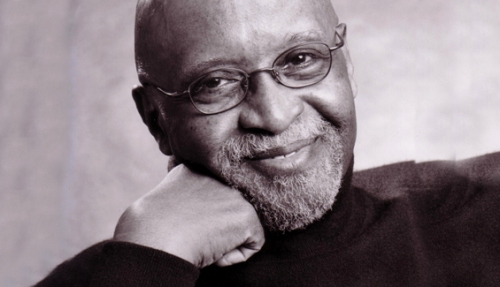 Next, in the world of jazz, one would expect a tribute.  Or an obituary. Or both.

But not a love story, which is what follows.

A few days ago, I was contacted by Sarit Work, co-producer of SUNSET AND THE MOCKINGBIRD, a not-yet-finished documentary about Junior and his wife, Gloria Clayborne Mance.  They have created a Kickstarter to help them finish the documentary.  The headline is “The love story of jazz legend Junior Mance and Gloria Clayborne Mance. As he loses his identity to dementia she reckons with her own.”

Being a man (although this may not be typical of my gender) I have less ability to cope with illness than women I know.  It’s terribly irrational, but I cringe at visiting people in hospitals, visiting the ailing, the dying . . . and so on.  There must be a name for this — call it “testosterone terror”? — which makes people like me hide under the couch, if possible.  Or in the car.  And dementia is especially frightening, because I am closer to being a senior citizen than ever before.  But Sarit was very politely persuasive, so I watched the trailer.

And it hit me right in the heart.

Junior has a hard time remembering, and he knows this. But he knows he loves Gloria.  And Gloria, for her part, is a lighthouse beacon of steady strong love.  It is not a film about forgetting who you are so much as it is a film about the power of devotion.

So I urge you — and “urge” is not a word I use often — to watch the trailer, and if you are moved, to help the project along.  It will be a powerful film, and I think that helping this project is very serious good karma.  Maybe it will protect us a few percent?

Here is the link.  Yes, the filmmakers need a substantial amount of money.  But anything is possible.  And, yes, I’ve already contributed.  And from this day (or night) the filmmakers have only EIGHT days to raise the sum they need.  So please help — in the name of jazz, in the name of love, or both.  In my dictionary, the two are synonyms.

Posted in Awful Sad, HELP!, It's All True, Jazz Titans, Jazz Worth Reading, Pay Attention!, The Things We Love

The posting below found its way into the JAZZ LIVES mailbox, thanks to John Herr:

January 12, 2009
Talk to the Newsroom:
Ben Ratliff, Jazz and Pop Critic
Ben Ratliff, music critic, is answering questions from readers Jan. 12-16, 2009. Questions may be e-mailed to askthetimes@nytimes.com.
Mr. Ratliff has been a jazz and pop critic at the New York Times since 1996.
Born in New York City in 1968, he grew up in London and Rockland County, N.Y., and studied Classics at Columbia University. He is the author of “Jazz: A Critic’s Guide to the 100 Most Important Recordings” (2002), “Coltrane: The Story of a Sound” (2007) and “The Jazz Ear: Conversations Over Music” (2008).
Among hundreds of reviews, reported stories and obituaries in these pages, he has written about Duke Ellington, Slick Rick, Shirley Caesar, Dorival Caymmi, Miles Davis, Tony Bennett, Johnny Paycheck, Cat Power, Slayer, Donald Lambert, the Stooges, Tito Puente, Miley Cyrus, Prince, Gal Costa, Bo Diddley, Bebo Valdes, the Texas A&M University Marching Storm, community singing in East Lansing, Mich., the praise-rock house bands at the High Desert Church in Victorville, Calif., and much else.

Q. Why isn’t there more of an audience for “straight-ahead” jazz? Or put in a different way, how come established jazz artists who have been active since the ’50s or early ’60s are given only niche status (or no visibility at all) by the media? Do you feel the media plays a role/responsibiltiy regarding the public awareness of such artists as Freddie Hubbard, Barry Harris, Cedar Walton, for example? Why is it that the general (U.S.) public have no awareness or appreciation of this genre?
— Paul Loubriel

A. Paul: This is a big question. I’ll try to hit some parts of it but I probably won’t answer it to your satisfaction.
In the last 60 years, people almost completely stopped dancing to jazz, and far fewer people grew up with pianos in the house. I think that has a lot to do with why jazz is no longer the popular vernacular art it used to be. When you dance to music (in all ways — partner dancing, stepping, headbanging — just reacting to music with your body) or when you play it, then you own it. A lot of people born since 1960 don’t feel that they own jazz.
Absolutely, the media plays a role in why the average person doesn’t know who Cedar Walton is. But I think the mainstream media — obviously we’re not talking about jazz magazines like Downbeat, which has Benny Golson on the cover this month (a good example of the kind of artist you’re talking about) — doesn’t, by definition, deal with the kind of art that post-bop mainstream jazz has become, which is an art of tradition and very slow refinements.
Mainstream publications, generally, want to run music stories about what’s new or radically different, or about trends. (This could get into a larger issue about the shallowness of the general perception of “news.”) With classical music, they put a lot of stock in premieres or big, notable new compositions. In jazz there are few premieres and few big, notable new compositions. One has to sniff out what’s interesting, however it presents itself: it could be a one-night gig attended by 15 people or a sold-out run.
As for the general public, they’re not buying albums as much anymore, and as much as jazz is a recordings medium at all, it’s still an album art.
I believe that jazz needs more jazz clubs (with small cover charges), because it’s still a social music. The way to know about Cedar Walton in 2009 is to go see him at the Village Vanguard.
By the way, I see that The Times has mentioned Cedar Walton 247 times, in reviews and articles and listings, since 1980. Not too bad.
*****************************************************************************************
Here’s the email I sent to Mr. Ratliff:

I’m happy that the Times has mentioned Cedar Walton 247 times.  But there’s a wide range of creative improvisation going on not too far from the Times’s offices that never gets mentioned: consider Jon-Erik Kellso and Matt Munisteri at the Ear Inn on Sunday nights (8-11), where the regulars and visitors include Michael Blake, Scott Robinson, Steven Bernstein, and others.  If “the media” define Jazz as no longer newsworthy, then people who love Jazz come to reject “mainstream” media and turn to smaller magazines and weblogs.
Sincerely,
Michael Steinman

P.S.  Come down to The Ear Inn on a Sunday night and I’ll buy you a drink.

(I didn’t mean this facetiously: I would stand Mr. Ratliff a second drink or even a Cobb salad if he showed proper appreciation of the music . . . and wrote about it.)

I don’t mean to demonize the media or Mr. Ratliff, but his apparently candid answer has some large omissions in it.

The standard argument has a good deal to do with the aging of the jazz audience.  Newspapers and magazines rely on advertisting to support themselves, and their research has shown, on whatever evidence, that the 18-35 group spends the most money.  That group has little or no knowledge of jazz, so it stands to reason.

But that argument isn’t entirely true.  Jazz clubs in New York are often full of people who have years to go before they apply for Social Security.

When anyone goes to the opera, there are many white-haired people in the audience, the house is full, and the Times provides full coverage of, say, a Renee Fleming performance.

The answer, for better or worse, is money.

Carnegie Hall and Lincoln Center take out substantial advertising in the paper (with full-color glossy advertising supplements) and run weekly ads in the Arts section — so there’s a substantial amount of money changing hands.  In addition, when Ms. Fleming has a new CD, Decca or EMI or London takes out a full-page ad in the Sunday Arts section.

The Ear Inn or Smalls doesn’t have that kind of advertising budget, so I am not surprised that Times critics don’t make their way down to those clubs to hear Kellso or Ehud Asherie. When I was trying to get more publicity for the Cajun jazz club, now demolished, I wrote directly to Nate Chinen, asking him to come down and hear the music — Kellso, John Gill, Kevin Dorn, Eddy Davis among others — and he never responded.

I said above that I am not surprised.  But I am disappointed in the lack of candor displayed by Mr. Ratliff and others.  When I read a “jazz magazine” and see an ad for Victoria Vocalist on page 8 and a glowing review of Victoria’s new CD on page 9, my innate skepticism springs to life.  Whether the ad came first or the review is not entirely the question, but their proximity removes the possibility of objectivity.  (Only those jazz magazines that either have no advertising or, like Cadence, keep the two entities separate, can aspire to honest objectivity.)

So all I would like someone from the Times to do — it doesn’t have to be Mr. Ratliff — is to say, candidly, “Look.  We don’t review jazz of the type you admire because we haven’t found a way to make sufficient income from it.  We used to be able to make money from it — in the Seventies, when the Newport Jazz Festival concerts took place in New York, they took out ads in the paper, and they were reviewed.  Now we can’t.  Rather than say that we need to review ONLY those artistic performances that pay for themselves, we’ll just say that the audience has changed, people no longer have pianos in their house, and so on.  It sounds so much nicer.”

In the Fifties, when record company executives used to pay disc jockeys to spin their new records on the radio, it was called “payola” and it created a scandal.  The word fell out of use some time ago, but the concept, I fear, is still thriving.  A pretense of journalistic objectivity is not the same thing as objectivity.