Photograph thanks to Scott Black: a trio of solid senders, Frank Trumbauer, Red McKenzie, and their former boss Paul Whiteman

William “Red” McKenzie, born in 1899, had a career whose highs and lows might have made a good — and sad — film biography.  Let us begin with a phenomenal hit record, the 1924 ARKANSAS BLUES — a smash for the novelty group, The Mound City Blue Blowers (McKenzie on comb and newspaper, Jack Bland on banjo, Dick Slevin on kazoo):

A word about his musical abilities, unique to him.  McKenzie’s singing isn’t to everyone’s taste; he is earnest, declaratory, even tipping over into barroom sentimentality.  But he could put over a hot number with style, and his straight-from-the shoulder delivery is both charming and a product of the late Twenties.  As an instrumentalist — on the comb and newspaper, a homegrown kazoo with panache — he had no equal, and the remarkable thing about the records on which he appears is how strongly he stands his ground with Coleman Hawkins and Bunny Berigan, powerful figures in their own right.  Both singing and playing, McKenzie reminds me greatly of Wild Bill Davison, someone who had “drama,” as Ruby Braff said.

In the late Twenties McKenzie was not only a musician but an activist for the music, bringing hot jazz players — Bix Beiderbecke, Frank Trumbauer, Jimmie Noone, the Spirits of Rhythm — to the attention of record companies and creating early record dates where Caucasians and African-Americans to record.  Without McKenzie, Coleman Hawkins would have waited a number of years to be allowed into the recording studio to perform with mixed groups.

Here is McKenzie in 1929 — out in the open in the short film OPRY HOUSE as a delightfully unrestrained singer, with Bland, banjo; Josh Billings, whiskbrooms and suitcase:

His popularity grew — as s singer and someone whose face might sell sheet music of a new song:

McKenzie was the featured vocalist with the Paul Whiteman Orchestra — an orchestra, we should remember, that had launched the careers of Bing Crosby and Mildred Bailey — with a pretty 1932 tune, THREE ON A MATCH (featured in the Warner Brothers film of the same name, starring Ann Dvorak, Joan Blondell, and Bette Davis):

He continued to be someone whose presence could help sell new songs — this 1936 number, that most of us know through Billie Holiday’s recording:

and this 1936 song, more famous in Bing Crosby’s recording:

At forty, McKenzie went into a temporary retirement — moving back to his hometown, St. Louis, to work at a brewery for four years.  Apparently he was one of the great heavy drinkers of his time, and only the support of his great friend Eddie Condon kept him in the limelight in the Forties, where he appeared now and again at a Condon concert or a Blue Network broadcast.  The latter, I think, accounts for McKenzie’s 1944 appearance on a V-Disc and a session for Commodore Records — where Milt Gabler also thought the world of him.  Gabler produced record sessions simultaneously for Decca Records and the World Transcription System: here’s a 1944 version of DINAH with McKenzie, Max Kaminsky, Jack Teagarden, and Pee Wee Russell:

Here’s McKenzie as captured by William P. Gottlieb in an October 1946 photograph: 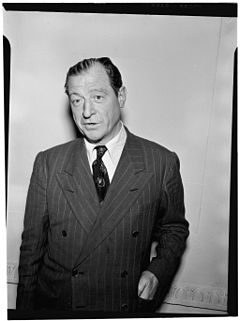 But little was heard from McKenzie for the last years of his life, except for one 1947 record date — shown in a newsprint advertisement for four sides on the National label.  His obscurity is nodded at — another “comeback story” in the sad word REINTRODUCING: 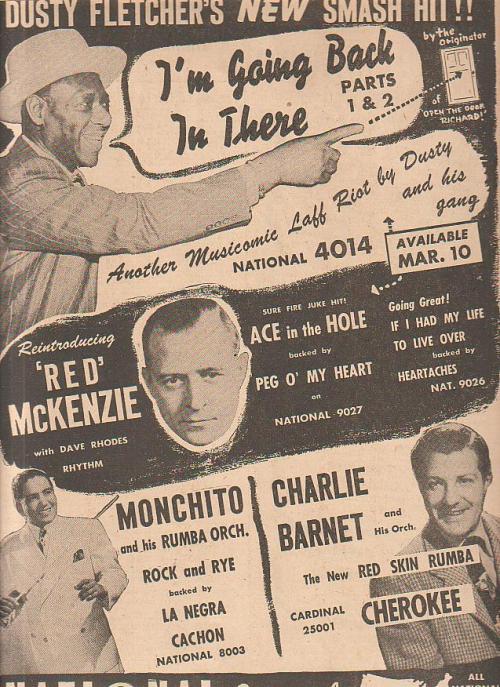 By February 1948 McKenzie was dead — cirrhosis the official cause.  I find IF I HAD MY LIFE TO LIVE OVER and HEARTACHES sad reminders of what had happened.  I would hate to think that his life could be summarized as an equal devotion to hot music and hard liquor, the latter winning out over the former.

Had he been in better health, he could have been one of those apparently ancient but still vivacious stars who appeared on the ED SULLIVAN SHOW and the HOLLYWOOD PALACE alongside Crosby, Sophie Tucker, Durante, and Ted Lewis . . . but it was not to be.

Posted in "Thanks A Million", Awful Sad, Hotter Than That, It's A Mystery, Jazz Titans, Pay Attention!, Swing You Cats!, The Real Thing, The Things We Love

More from the First Thursday Band — a small hot jazz ensemble that appears on a particular day at the New Orleans Restaurant in Seattle, Washington.  They are Steve Wright on reeds and cornet; Ray Skjelbred, piano; Dave Brown, string bass;  Mike Daugherty, drums.  Each member of the band occasionally takes a casual but expert vocal, and these four players swing as soloists — and, even better, as an ensemble.  Here are a few selections from their their Thursday date of 2.2.12 — a harmonious-looking date in itself.

A song I love deeply — could it be from hearing Louis, Bobby, Joe Thomas, Jack Teagarden, and others perform it? — HOME.  And this version perfectly balances Sweet and Hot:

SO SWEET comes from Jimmie Noone, and the title describes it perfectly:

Disorientation and perhaps even homelessness never swung so hard or sounded so good as in SONG OF THE WANDERER:

MOANIN’ should be a depressing exercise, but this performance is quite uplifting:

One of my favorite tunes — which other Thirties cowboy number has ties to Red Allen, J.C. Higginbotham, and a doomed Bob Hoskins?  Take another one, Mike!  ROLL ALONG, PRAIRIE MOON:

To me, this compact little band is a triumph of both sound and intuition.  The players hark back to a time when you could tell an instrumentalist or singer in a few notes — instantly recognizable personal identities, like the great film stars.  No one ever confused Bette Davis or Benny Morton with anyone else!  Each member of this quartet has his own identity, and although the whole concept honors the past (so you could, if you liked, talk about Charlie Holmes and Jess Stacy, George Wettling and Al Morgan among a hundred other heroic figures), you hear Skjelbred’s traceries, Brown’s resonant pulse, Daughterty’s cornucopia of rocking sounds, Wright’s lyrical messages.  And the quartet is more than simply four great players bundled together onstage: they remind me of the great string quartets who worked together for years and played better than four individuals with bigger names.  Intuition is at work here — so that each player is both advancing his own vision and listening deeply to what the other fellow just “said,” or anticipating what he thinks is coming next.  A little family of people who know the same language and love its possibilities.

I don’t know when I will end up in Seattle, but I would like it to be a First Thursday.

These videos — and more! — are posted on YouTube by the very gifted Mr. Wright — you might want to subscribe to his channel, swr2408018 — so you don’t miss even a four-bar break.

Posted in "Thanks A Million", Generosities, Hotter Than That, Irreplaceable, Jazz Titans, Pay Attention!, Swing You Cats!, The Heroes Among Us, The Real Thing, The Things We Love

Ordinarily, I don’t feel a need to promote the Post Office.  I look forward to my mail; I have pleasant relationships with mail carriers.  But the USPS seems a ubiquitous business that doesn’t need publicity from me.  However, I am finicky about the stamps I buy, and carefully consider their appearance and their messages before buying them.

When I went to my Post Office today and asked what new 42-cent stamps they had, I was offered sunflowers, Latin jazz, baseball games, Bette Davis, Alzheimer’s research, and a few others.  Latin jazz and Bette Davis were competing for my attention until I saw this sheet:

“Vintage Black Cinema” I can support wholeheartedly: homages to Paul Laurence Dunbar, Duke Ellington and Fredi Washington, Josephine Baker, Nina Mae McKinney, and Louis Jordan, as well as African-American film production companies going back to 1921.  I bought two hundred stamps, which will get me into 2009 in fine cinematic style.  Maybe next year the USPS will consider a second series, including SEPIA CINDERELLA, BOY! WHAT A GIRL, and JAMMIN’ THE BLUES, among others?

Putting these stamps on the envelopes that hold my bills won’t make that task seem any easier, but the stamps themselves give pleasure — not only for the way they look (I grew up around films and movie theatres) but what they represent.

Posted in The Real Thing, The Things We Love