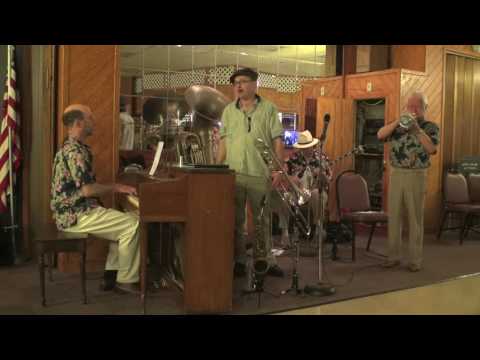 I’d heard and admired Leon Oakley on records for a long time before I first met him in five years ago.  We became friends instantly because of our shared love for lyrical hot music and our reverence for Louis.

But in all the performances of Leon’s that I’ve been privileged to witness, I’d never seen him sing.  Although I’m sure he’s done it before in public, this is a first for me — and it’s so lovely.

A little background.  The group Leon is leading was originally called the Black Diamond Blue Five, founded by the late George Knoblauch — devoted to a particular sound and approach, that being Clarence Williams small groups of the middle Twenties.  “Hot and ready,” would be one way to describe it.  This version, called “Friends of the Blue 5,” a title combining “Friends of Jazz” and “Blue 5,” took the stage at the New Orleans Jazz Club of Northern California in El Sobrante, California, on May 15. 2016.  The recording was done by the indefatigable Rae Ann Berry, who’s captured so many hours of pleasure for us all.  The other members of the band are the always-amazing Clint Baker, clarinet, trombone, vocal; his son Riley Baker, tuba; Marty Eggers, piano; Bill Rinehart, banjo.  The song is a late-Thirties Louis composition about the joys of steamboat travel — going no place in a hurry — down the Mississippi River:

One way to “honor” Louis would involve a handkerchief, grins and grimaces — a caricature that barely evoked the surface.  (Joe Muranyi said more than once that Louis hated such acting.)  I delight in the approach that Leon takes: gently earnest heartfelt singing and playing, completely loving, completely authentic.

I look forward to the 2016 Steamboat Stomp — where Leon, Clint, I, and other heroes will be on the Natchez, up and down that river.  Perhaps Brother Leon can be talked into a few vocal choruses?

And this post is for Jean Knoblauch, a dear friend even when at a distance.

It wouldn’t be the first time that I thought that the title of this song was totally inaccurate.  See if you agree after watching this exuberant performance by the San Francisco Traditional Jazz Foundation Band (recorded by our own Rae Ann Berry on August 2, 2010 at Nick’s* in Pacifica, California).  The All-Stars (and here the title is accurate) are Bob Schultz and Jim Cullum, cornets; Dan Barrett, trombone; Bill Carter, clarinet; Bill Gould, piano; Scott Anthony, banjo, Bill Reinhart, bass; Hal Smith, drums:

*No, it isn’t 1946, and the proprietor isn’t Nick Rongetti, but the music certainly sounds that way!

The New Orleans musicians — even the ones who took expansive solos as the nature of jazz changed — knew how important inspired ensemble playing was.  It would have been very bad form to cut short a romping group effort and simply dilute its force into a series of solos with the rhythm section.

And this principle is perfectly demonstrated by a recent performance by Clint Baker and the Cafe Borrone All-Stars (captured on August 13, 2010, by the unwearying Rae Ann Berry) of the pop song “SAY ‘SI SI'” where for nearly five minutes the front line keeps a splendid momentum going.

That’s Clint on trumpet and clarinet, Jim Klippert on trombone, Robert Young on a variety of reeds, Bill Rinehart on banjo, Jason Vanderford on guitar, and Sam Rocha on bass:

Just try and keep sedately still while this video is playing . . . !

And there’s music that makes us smile.

You’ll notice a few delightful sidelights: what other band has its leader put down his guitar, play a hot clarinet chorus, and then go back to rhythm?  I love the Skjelbred – Hamilton interplay late in the performance, and I am especially amused by the young man (is he officially a “toddler”?) with his picture book, who seems transfixed by the music.  He’ll grow up to have his own jazz blog at the very least.

I find myself smiling: I hope you are doing the same.

Posted in "Thanks A Million", Ideal Places, Irreplaceable, Jazz Titans, Mmmmmmmmmmmmm!, Pay Attention!, Swing You Cats!, The Heroes Among Us, The Real Thing, The Things We Love