I was at Birdland last Wednesday, listening to David Ostwald’s Louis Armstrong Centennial Band.  The LACB always attracts first-rank players, but this edition was remarkable because it was an All-Star All-Leader Band (with none of the expected tensions): David on tuba and vaudeville commentaries; Vince Giordano on banjo, vocal, and guitar; Jon-Erik Kellso on trumpet; Dan Block on clarinet and alto sax; Jim Fryer on trombone and vocals.

Although it has nothing to do with his musical virtues, Jim might be the least-celebrated of this group, although I’ve admired his playing since I first heard him a few years ago — perhaps as a member of the Nighthawks and certainly as someone sharing the stage with Bria Skonberg at one of Bill Taggart’s informal jazz gatherings.  He is a modest player but an exuberant player, taking risks when appropriate, never coasting.  I’ve also known him as a fine understated singer — but I’ve never heard him sing as wonderfully as he did last Wednesday.

As much as he enjoys playing the music and talking about Louis Armstrong, David Ostwald loves to connect with the people in the audience.  Occasionally it takes the form of comedy, as when he earnestly implores those of us who are driving to be sure we have a car, but sometimes it’s much more personal and endearing.  At the end of the first set, David noticed that there were a number of well-dressed women of varying ages in the front row; he chatted with them and found that they were at Birdland to celebrate someone’s birthday — which turned out to be the nicely coiffed Lorraine . . . someone obviously surrounded by love from the other women in her party.

Because the LACB draws much of its repertoire from music that Louis played and recorded, SWEET LORRAINE was a natural choice — something the great man recorded in the Fifties on Verve with Oscar Peterson.  So the band launched into a sweet, slow version, but no one had yet chosen to take the vocal.  Vince had sung a few numbers before this with great style, but no vocal was announced . . . until Jim took the microphone to deliver the refrain in the most tenderly endearing manner:

Lorraine, sitting right in front of me, was delighted.

And I, watching this performance again, find it full of human moments: the pleasure of Dan Block’s chalumeau register; Jon-Erik’s steady, winding phrases (and how unflappable he is while a good deal of microphone-hunting is going on behind him); Vince, making jokes as he plays; the pulse of the rhythm section, and Jon-Erik’s quiet Muggsy Spanier ending.  Masterful all around!

Sometimes bad things pile on: this was a rare night when one outpouring of affection succeeded another.  Vince Giordano came over to Lorraine at the end of the night (he is ever hopeful of garnering some fascinating piece of first-hand experience from someone who saw and heard his heroes) but Lorraine didn’t recall the names of bands; she didn’t have Victor Home Recording discs in her attic; she did, however, tell Vince that she was an avid fox-trotter, which pleased him.

Then David Ostwald brought himself and his tuba over and tenderly chatted with Lorraine . . . and said, “I’m going to play something for you.”  He proceeded to play a tender, legato, singing version of HAPPY BIRTHDAY — sweet and slow — on the tuba, ending with a Louis-flourish.  He sang through that brass tubing as if it were a cello — a very moving experience!  I was sitting there, possibly with my mouth open, too struck by what was going on (it seemed private) to record it for YouTube, so you will have to imagine it.

When I caught up with Jim later, to tell him how much this particular performance moved me, he reminded me that one of his and his wife Rosita’s daughters is named Lorraine — a choice the prospective parents made after hearing Doc Cheatham sing the song with unaffected grace on Sunday brunches at Sweet Basil.  It pleases me immensely to be able to offer this lyrical moment for the Lorraine in the audience, Lorraine Fryer, and all the people out there who answer to other names.

What is all this?  Love in the shape of music.

Posted in "Thanks A Million", Mmmmmmmmmmmmm!, Pay Attention!, Swing You Cats!, The Heroes Among Us, The Real Thing, The Things We Love

JIM FRYER AND BRIA SKONBERG: OUR KIND OF MUSIC! 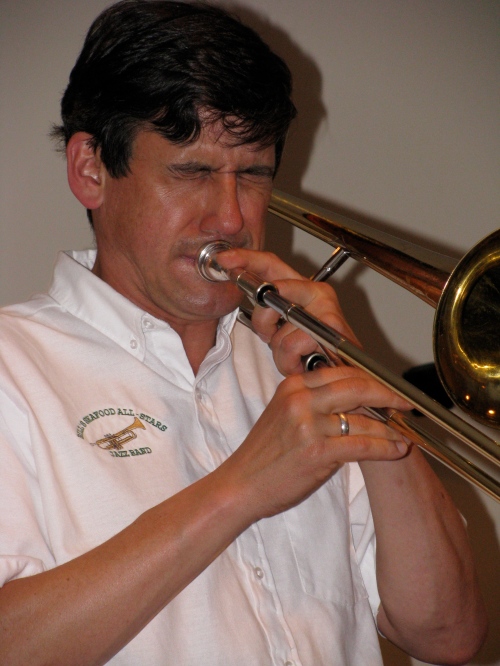 Bruce McNichols, of the Smith Street Society Jazz Band, invited me and the Beloved to a trad jazz party hosted by OKOM (Our Kind Of Music) in Lafayette, New Jersey, on April 22. Such invitations are rare and precious, the weather was beautiful, so with a few instructions to our GPS, we found ourselves at Bill Taggart’s beautiful, sprawling house, and were led down to the basement (the OKOM recording studio) for a jam session featuring Bria and Jim with Herb Gardner on piano, Gim Burton on banjo, and Ed Wise on bass. The set we heard featured sparkling variations on familiar jazz standards: “Margie,” “All of Me,” “Dinah,” “There’ll Be Some Changes Made,” and “Buddy Bolden’s Blues.” In it, Bria distinguished herself once again by a brilliant tone and an easy, rangy command of the horn, a wicked dexterity with the plunger mute, and charming, unforced singing. Jim showed off his talents on all his horns and singing, reminding me at points of trombonist Eddie Hubble. 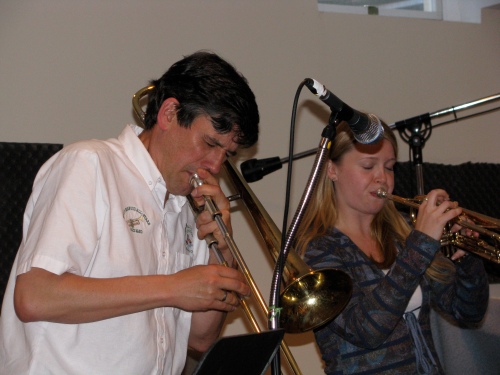 For those who didn’t make it to that particular corner of New Jersey that afternoon, they need not despair: aesthetic relief is at hand, on the compact disc “Over Easy: Bria Skonberg and Jim Fryer’s Borderline Jazz Band,” on OKOM (details are available at www.okom.com., or you can call 1-800-546-6075. It’s an exceedingly uncliched mixture of classics Thirties pops, “I’ve Got My Love To Keep Me Warm,” and classic material from “In A Mellotone” to “At the Jazz Band Ball.” The sextet is a truly hot band, subtle and knowing, and you should get to know them as quickly as possible.

Posted in The Heroes Among Us, The Things We Love