A dell is a small, secluded valley, often with trees. Then there’s the children’s song, recorded almost two hundred years ago in Germany:

Then, there’s the piece of music that ran through my thoughts this morning:

“You play your personality,” Roswell Rudd told me.

Jazz musicians of this caliber didn’t need sophisticated melodies or chord changes to make memorable — perhaps whimsical — music. And I wonder. Did someone [possibly Helen Oakley Dance] in the studio say, “You fellows can swing anything. Even nursery rhymes,” before everyone began to improvise variations on the theme?

Of course, there’s always the idea that the Rabbit would have been at home in the Dell, but I digress.

Posted in "Thanks A Million", Bliss!, Generosities, Irreplaceable, It's All True, Jazz Titans, Mmmmmmmmmmmmm!, Pay Attention!, SURPRISE!, Swing You Cats!, That Was Fun!, The Heroes Among Us, The Real Thing, The Things We Love, Wow!

This band was a real treat at the March 2020 Jazz Bash by the Bay — their enthusiasm, their willingness to get dirty, their skill, their passions, and in a repertoire that went comfortably from Ellington to a Buck Clayton Jam Session to Johnny Dodds.  I’m speaking of Clint Baker’s New Orleans Jazz Band, which in that weekend’s incarnation, was Clint, trumpet; Riley Baker, trombone; Ryan Calloway, clarinet; Carl Sonny Leyland, piano [for this set]; Jess King, guitar, banjo, vocal; Bill Reinhart, banjo; Katie Cavera, string bass; Hal Smith, drums.  And today I want to share only one performance — because it knocked me out, as they used to say and still do — the groovy Ellington blues, with Rex Stewart certainly a co-composer, SOLID OLD MAN.  (I worry about the punctuation of that title, but you should hear the music first.)

SOLID OLD MAN is perhaps most famous as a tune that Rex, Barney Bigard, and Billy Taylor brought to Europe for their recording session with Django Reinhardt — a recording session that is completely ingrained in my heart for perhaps fifty years.  Note the more accurate composer credits! 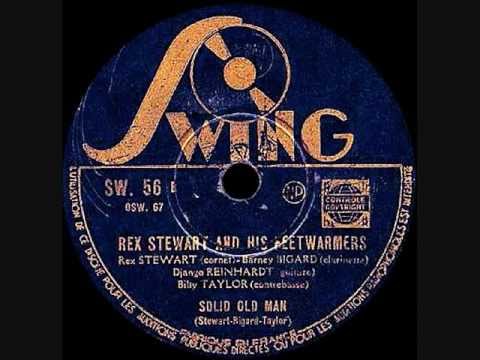 But two postscripts.  I taught college English for a long time (a LONG time!) and I know that punctuation makes a difference.  I can see the recording supervisor at Brunswick or Master Records, after the session, saying to Ellington, “Duke, what do you call that one?” and Ellington answering in the common parlance of the time, “Solid, old man!” in the sense of “Great work!” or “I totally agree with you, my friend!” or “You and I are brothers.”  But it always has had an implicit comma, a pause, as it were.  And certainly an explicit exclamation point.  So, to me, its title is lacking and perhaps misleading: when I see SOLID OLD MAN, I think of someone over six feet, weighing over three hundred pounds, who has been collecting Social Security for years.  Perhaps a security guard at the mall.

The second postscript is not a matter of proofreading.  Last night I was on Facebook (my first error) and reading a controversy in a jazz group about who was good and who was bad (my second) that got quite acrimonious.  Facebook encourages bad-mannered excesses; I was uncharacteristically silent.  But I noted one member of the group (an amateur string player) made a snide remark about “California Dixieland,” and when a professional musician of long-standing asked him to define what he was mocking, the speaker — perhaps having more opinions than knowledge — fell silent.  Unnamed adjudicator of taste, I don’t know if you read this blog.  But if you do, I suggest you listen to SOLID OLD MAN ten or twenty times to get your perceptions straight before you opine again.  And those of us who know what’s good can simply enjoy the performance many times for its own singular beauties.

Posted in "Thanks A Million", Bliss!, Generosities, Hotter Than That, Ideal Places, It's All True, Jazz Titans, Jazz Worth Reading, Mmmmmmmmmmmmm!, Pay Attention!, Swing You Cats!, That Was Fun!, The Heroes Among Us, The Real Thing, The Things We Love, Wow!

I woke up yesterday morning with the melody of SHE DIDN’T SAY YES in my head — as performed in 1946 by Joe Thomas and his Orchestra for Keynote Records — and that performance insisted that I share it and write a few words in its honor.  The song comes from the 1931 Jerome Kern – Otto Harbach musical comedy THE CAT AND THE FIDDLE, and it is limited in its ambitions (words and music) but it is also irresistible.  The steplike melody is difficult to get rid of once one hears it, and the coy naughtiness of the lyric — raising the question of being “bad” when badness seems so delightful, but tossing the moral question back at the listener — combine in a kind of musical miniature cupcake.

Here is a video clip from the 1934 film version of the play — Jeanette MacDonald, looking lovely, sings SHE DIDN’T after a large clump of cinematic foolishness, including post-Code dancing, has concluded. (My contemporary perspective makes this scene slightly painful to watch, as Jeanette is bullied by the crowd into declaring a love that she seems to feel only in part.)

The song was recorded a number of times in the early Thirties (by Leo Reisman and Chick Bullock, among others) but may have surfaced again with the 1946 film biography of Kern, who had died suddenly the year before, TILL THE CLOUDS ROLL BY.  However, since its performance in the film by the Wilde Twins goes by quickly, I think other reasons may have led to its being chosen for this Keynote Records date.  Did Harry Lim hear something in its melody — those repeated notes that Alec Wilder deplored — or did Joe Thomas like to play it?  We’ll never know, but it is a recording both memorable and forgotten.

The band was “Joe Thomas And His Orchestra,” itself a rare occurrence.  Lim had used Joe on many sessions for Keynote (the Forties were a particular period of prominence on records for him, thankfully — where he recorded alongside Art Tatum, Coleman Hawkins, Jack Teagarden, Roy Eldridge, Don Byas, Teddy Wilson, Sidney Catlett, Ed Hall, Barney Bigard, and other luminaries).  The band was  Joe Thomas, trumpet; Tyree Glenn, trombone; Hilton Jefferson, alto saxophone; Jerry Jerome, tenor saxophone; Bernie Leighton, piano; Hy White, guitar; Billy Taylor, Sr., string bass; Lee Abrams, drums, and it was done in New York on August 16, 1946.  I don’t know who did the backgrounds and introduction, but the recording is a small marvel of originalities.  I listen first for the soloists and their distinctive sounds and then consider the performance as an example of what one could do with texture and small orchestral touches with only an octet.

I first heard this record coming out of my radio speaker when Ed Beach did a show devoted to Joe Thomas — perhaps in 1969 — and then I got to see Joe both on the stage of Carnegie and Avery Fisher Halls (with Benny Carter and Eddie Condon, consider that!) and at much closer range in 1972-74, thanks to the kindness of my dear Mike Burgevin.

I don’t want to subject this recording to chorus-by-chorus explication, but I would ask listeners to hear the individual sounds and tones these players had: Joe, Tyree, Hilton, Jerry — each man singing his own distinctively recognizable song — and the perky unflagging rhythm section, with Leighton beautifully doing Basie-Wilson-Guarnieri, and the lovely support of Billy Taylor, Sr., who had kept the Ellington band swinging.

“We had faces then!” to borrow from SUNSET BOULEVARD.

I keep coming back to the gleaming warm sound of Joe Thomas — in the first chorus, outlining the melody as if nothing in the world were more important; in the closing chorus, flavoring and shading it as only he could.  And the rest of the band.  As a friend said to me recently, “They were pros.  They really knew how to do it.”  And bless Harry Lim: without him, we would know such things happened but they would now be silent and legendary rather than tangible and glowing.

This music says YES, no hesitation.

The trumpeter Joe Thomas would have celebrated his birthday yesterday, but since he left us in 1984, I will do it in another fashion here. 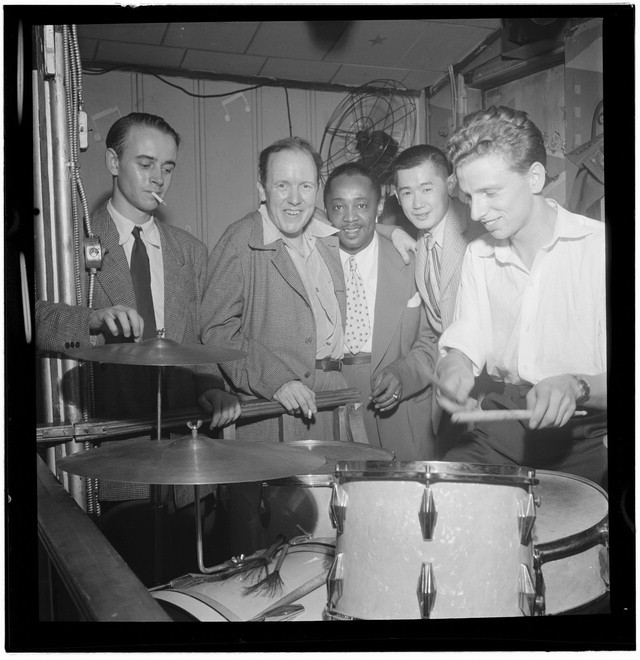 Throughout his career, Thomas was surrounded by more assertive, even aggressive trumpeters, who could play louder, faster, higher.  And thus he did not always get the attention he deserved for his lyrical balanced style, which shone.  But he is a great poet of shadings, tone, and beautifully placed phrases.  At first, his playing might seem simple: ascending arpeggios that woo the ear.  But his singing tone, the darks and lights of his sound, are permanently memorable.  I saw him a few times in the early Seventies, and solos I heard still ring in my memory.  That, to me, is the highest art.

POCATELLO is an improvisation over the harmonies of the then-famous IDAHO, recorded in 1946 by Thomas and friends for his great champion Harry Lim of Keynote Records.  (Thomas had other musical friends who recognized him as special: he recorded with Lil Hardin Armstrong, Fletcher Henderson, Teddy Wilson, Benny Carter, Vic Dickenson, Claude Hopkins — so his beautiful sound and phrasing was heard, as we say.)

The YouTube video has a verbal introduction by “Leif Smoke Rings Anderson,” which initially startles but is clearly affectionate.  I encourage you to hear and re-hear Joe’s opening chorus and the way he rides out over the band.  Although this was his session, he so graciously makes room for everyone else:

Joe Thomas, a true poet of the idiom.  His work never fades.  I wrote at greater length about his quiet majesty here in 2009.  Happily, much more of his work is available on CD and on YouTube, so he can be heard and loved in this century.

Posted in "Thanks A Million", Bliss!, Generosities, Irreplaceable, It's All True, Jazz Titans, Mmmmmmmmmmmmm!, Pay Attention!, Swing You Cats!, That Was Fun!, The Heroes Among Us, The Real Thing, The Things We Love, Wow!