“JAZZ ITALIAN STYLE, FROM ITS ORGINS IN NEW ORLEANS TO FASCIST ITALY AND SINATRA,” by ANNA HARWELL CELENZA

“I prefer books that tell me things I don’t know,” said Mark Twain. Or if he didn’t, he should have.

JAZZ ITALIAN STYLE is such a book — wide-ranging, full of intriguing information, and refreshingly straightforward. 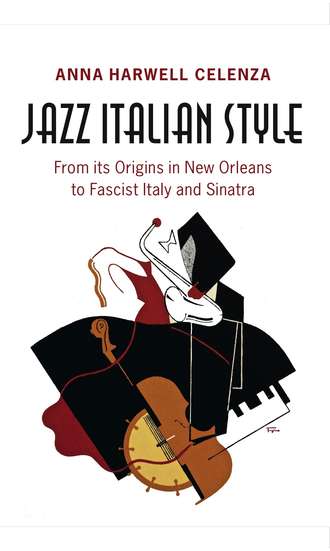 I will say that I thought I knew a great deal about the title and the subject.  After all, I know Rossano Sportiello, Marc Caparone, Paolo Alderighi, and Larry Scala. I have recordings by Frank Sinatra, Joe and Marty Marsala, Leon Roppolo, Louis Prima, Joe Venuti and Eddie Lang, Wingy Manone, Jimmy Durante, Tony Sbarbaro, Nick La Rocca, Marty Napoleon, Phil Napoleon, Lino Patruno, and others.  Years ago, I owned a vinyl anthology on Italian Odeon called ITALIAN JAZZ OF THE 50s, which had music from the Roman New Orleans Jazz Band and Romano Mussolini, with other bands I do not recall.  In the very early Seventies, I ate authentic Italian food at the Half Note, under the loving supervision of the Canterino family.  (All of the above is true, although not meant to be taken with the utmost seriousness.)

But the glory of Celenza’s book is the information it offers — subtle illumination of areas of the subject that I was ignorant of, and I am sure my ignorance is not my sole property.  And the fruits of her investigation are the substance of this appreciation of her book.

But first: we are told, even before the book starts, that Celenza is “the Thomas E. Caestecker Professor of Music at Georgetown University, where she teaches courses in music history, radio journalism, and the music industry.”  To some readers, those credentials will seem either the kiss of death or the black hand: another academic book, indigestible, a forest of footnotes, theoretical and ideological beyond endurance.  Calm yourselves.  Celenza is an engagingly straightforward writer, clear, candid, and witty.  (I saw the wit when I opened my copy at random and saw she had translated “Il Quattro Buffoni,” a band name on a record label, as “The Four Idiots.”

She doesn’t talk down to the general reader, and the book down’t labor under chunks of undigested digressive facts.  And leaving aside the useful documentation and index, the book is a compact 192 pages, because Celenza has not felt an obsessive need to include every fact that wanders by, and her chosen time period is under half a century.  It isn’t a book-length study of Sinatra, fascism, or every Italian who’s ever improvised, and that adds to its charm and effect.  Rather, like effective cultural studies, it traces the interweavings of many phenomena: radio and the growth of the recording industry, political struggles and performance, and much more.

As I promised above, I salute this book for adding information to my mental hoard.  Here are a number of things I didn’t know before reading JAZZ ITALIAN STYLE.

•     “The most horrific mass lynching in US history occurred in New Orleans in 1891, when eleven Italian immigrants were shot and strung up by an angry mob after a  jury found them innocent of assassinating the local police chief, David Hennessey.”

•     In 1919, Chevalier Bruno Zuculin wrote a description of the musical scene in New Orleans — and the music itself — for Italian readers.  The article was published two months before Ernest Ansermet’s famous celebration of Will Marion Cook’s Southern Syncopated Orchestra, which included the young Sidney Bechet.

•     “D. Onivas,” whose orchestra is on the reverse of some 78s by Cliff Edwards, is the pseudonym of Domenico Savino, composer and conductor.

•     Jazz first came to Italy with the USAAS (United States Army Ambulance Service) and its American Jazz Band landed  — and when members of the American and Italian armies recorded for Fonotopia in December 1918.

•     I had assumed that Mussolini, like Hitler, was hostile to jazz as decadent music: not so, in fact, Il Duce “embraced” it as an expression of the Futurist art he celebrated.

•     I had never heard or heard of the female vocal trio, “the three graces of the radio,” the Trio Lescano — Alexandra, Judith, and “Kitty,” originally from the Netherlands, who became singing stars in Italy.

•  During the Second World War, when recordings by American artists were played on the radio, new Italianized names for the musicians were invented: Luigi Braccioforte, La Colema, Del Duca, and Beniamino Buonuomo.  (Answer key on request.)

These excerpts are, of course, not the substance of this book.  Celenza has a wonderful understanding of the widespread forces that go into the development and growth of jazz in Italy, and one will come away from this book with a much deeper understanding of the mingling of history, race, ideology, and politics — during war and in peacetime.

JAZZ ITALIAN STYLE is very rewarding, but never ponderous.  Here are the publisher’s resources for the book, and this is the link for the CD label offering for sale almost all the jazz described in the book.  And since a book like this cries out for a soundtrack, here is the one Celenza has generously created — 124 relevant musical examples that delight and illustrate.

Posted in "Thanks A Million", Generosities, It's All True, Jazz Worth Reading, Pay Attention!, That Was Fun!, The Heroes Among Us, The Real Thing, The Things We Love