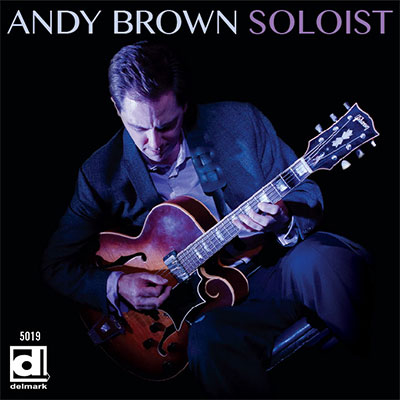 Andy Brown knows and embodies the simple truth.  It’s not how many notes you can play: it’s how you convey feeling with those notes.

For some time, the guitar has been the most popular instrument on the planet. Many guitarists aspire to blazing technique that causes the fretboard to burst into flames.  If you like to blame people, you can blame Hendrix, Bird, or even Django, masters who suggested to the unwary that the way to be even better was to be faster, more densely aggressive.

I come from a different school, having heard Charlie Christian, Teddy Bunn, Herb Ellis, Barney Kessel, Mary Osborne, George Barnes, George Van Eps and others early in my development. I cherish deep simplicities, not fireworks. That is why I have delighted in the playing of Andy Brown and am especially entranced by his most recent CD, plainly named SOLOIST (Delmark Records).

Andy Brown makes music, first and always.  His music woos the ear and the brain but lodges deep in the heart.  You shouldn’t get the wrong idea about him from my somewhat reactionary description: he is no primitive, rejecting technique because he has none.  On the contrary, he can play quickly, elaborately, and dramatically when the music calls for it.  The most mature players know that the greatest displays of technique involve restraint, subtlety, and breathing space.  Andy understands this, and what you hear is a relaxed lyricism where every note counts.  He is a melodic improviser, someone in love with beautiful warm sounds, not trying to impress listeners with outlandish dramatic spectacle.

Andy sounds like himself, but if I were pressed to say what ancestral heroes his playing suggests, they wouldn’t be guitarists.  Rather, I think this CD would have made Bobby Hackett, Ruby Braff, and Count Basie grin, for its understated singing grace, its beaming pleasure in music-making.

Time for a sample? Make yourself comfortable and savor these varied performances — beginning with luminous solos, then moving to collaborations with Howard Alden, Petra van Nuis, Jeannie Lambert, the cats at the Chautauqua Jazz Party, and even Barbra Streisand.  (Don’t be disconcerted that on the Streisand video — taken from a television appearance — the words “INSIDE DEATH ROW” appear bottom right.  No hidden messages here.)

Here you can hear brief audio samples from the CD.

Andy’s idols are many — he explains all that in his delightfully understated liner notes — but this isn’t a homage to any one guitarist.  It isn’t a disc where the artist reproduces and then elaborates on an influential album or set of recordings.

SOLOIST is a love letter to beautiful songs played with affection and swing, and it is easy to listen to without being Easy Listening.  It would impress any harmonically-astute guitar whiz but it could also embrace someone who knew nothing about substitute chords.  And although most of the songs are “standards,” they are played as if they were just written. Their melodies shine through; they swing.

And — unlike many solo guitar recordings I’ve heard — the sound is plain, unaltered, but gorgeously warm.  I see that the engineer is Scott Steinman — we are no relation — and he has done a lovely job.  And all I can say is that when I began listening to this disc, I delighted in it from first to last and then it seemed the most natural thing to start it up again.  You will feel similarly.

SOLOIST is a lovely recording, and an accurate record of the music of someone I admire, having heard him in person.

Andy writes in his notes that he simply began to play in the recording studio as he would on a gig. That should give any motivated person in the Chicago area a good idea: see Mr. Brown live and buy several copies of the CD from him.