There are only two record albums (in the 78 RPM sense) circa 1944-45 that have Pee Wee Russell as leader.  One is on Disc, and features an uncredited Muggsy Spanier, Vic Dickenson, Cliff Jackson, Bob Casey, and Joe Grauso: the cover is a drawing by David Stone Martin.

The other, a year or so earlier, was part of a project started for the musicians appearing at Nick’s in Greenwich Village to have records to sell — to publicize their efforts and the club’s music.  Three 78 albums were created: featuring Muggsy Spanier, Miff Mole, and Pee Wee.  Other musicians on these dates included Lou McGarity, Gene Schroeder, guitarists Fred Sharp or Carl Kress (Eddie Condon was under contract to Decca), and drummer Charles Carroll, if I recall correctly.

A friend passed this one on to me.  It is inscribed, but more about that in a moment: 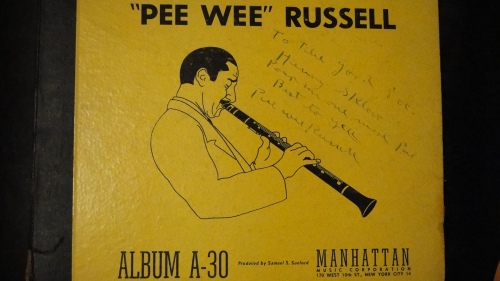 To The Good Doc.

Pour me one more Pal

If I could time-travel, one of my requests would be to be back somewhere in the Forties, so that I could ask Pee Wee Russell for his autograph and be called “Pal.”  Or perhaps “Chum.”  What more could I ask for?

I learned from Hank O’Neal and Eddie Condon’s EDDIE CONDON’S SCRAPBOOK OF JAZZ that Henry Sklow was a dentist who loved the music and his job was to keep an eye on the bottle or bottles at the Jimmy Ryan’s jam sessions . . . so the request Pee Wee made in his autograph must have been one he made often in real life.

May your happiness increase, Pals!

Posted in "Thanks A Million", Bliss!, Generosities, Hotter Than That, Ideal Places, Irreplaceable, It's All True, Jazz Titans, Jazz Worth Reading, Pay Attention!, Swing You Cats!, The Heroes Among Us, The Real Thing, The Things We Love, Wow!