I didn’t get to the UK until 2005, so I missed a great era in Anglo-American relations . . . not Roosevelt and Churchill, but the opportunity to go record-shopping at Dobells, 77 Charing Cross Road.  I knew about it, however, through the “77” record label — with issues featuring Dick Wellstood, Don Ewell, Pete Brown, Bernard Addison, Sonny Greer, and more.

A new gallery exhibition, lovingly assembled, celebrates that great place and time — and the music that Dobells nurtured.  The exhibition runs from April 10 – May 18, 2013 at CHELSEA space.

CHELSEA space presents a rare opportunity to view previously unseen material from the Museum of London and British Record Shop Archive collections, concerning one of the world’s greatest record shops.

Dobells (1946-1992) was a significant meeting place for fans of jazz, folk and blues. This exhibition explores Dobells position as a retail environment, information network, cultural landmark and social hub through archive artefacts, ephemera, photographs (many by the celebrated jazz-blues photographer Val Wilmer), and graphics.

Doug Dobell began selling collectable and imported jazz records in 1946 at his family’s rare books shop at 77 Charing Cross Road. In 1957 he started up the 77 record label and was instrumental in developing, recording and marketing jazz, blues, folk and world music in the UK. At a later point 75 Charing Cross Road next door to the original store, was used to house Dobells Folk Record shop section.

Prominent US musicians could be found dropping into Dobells including Muddy Waters, BB King, Roy Eldridge, Ben Webster, Red Allen and members of the Ellington band. A young Bob Dylan recorded in the small basement studio there in 1963 and Janis Joplin would visit with a bottle of Southern Comfort as a gift for the staff of the store. 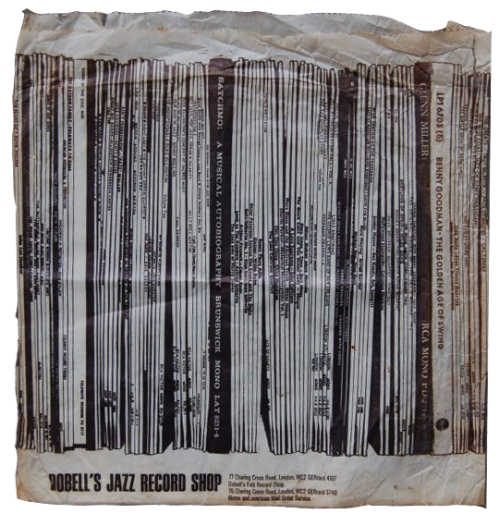 Dobells stocked American blues 78s, 45s and LPs and many British music fans got their first ever taste of Mamie Smith, Leadbelly and Big Bill Broonzy there. The imported US records purchased at the record shop inspired such pioneers of British jazz and blues as Alexis Korner, Cyril Davies and Chris Barber (amongst many others). All the bands of the British Blues explosion: The Rolling Stones, Led Zeppelin, Cream and Fleetwood Mac shopped there. Martin Carthy, Dave Swarbrick, Mac McGann, Bert Jansch, The Vipers Skiffle Group, Lonnie Donegan and other folk musicians raided the shop’s racks of Woody Guthrie and Cisco Houston records. David Bowie was also a regular customer during the early 1960s.

Dobells provided a network for British Jazz musicians including Tubby Hayes, Ronnie Scott, Johnny Dankworth, Vic Lewis, Harry Beckett, Ian Carr, Mike Westbrook and many others who would meet there to check out the new imports in the listening booths and chat about the latest sounds. Such was the standing of Dobells, that it found its way into literature with New immigrants to London from former colonies and war torn nations would also visit as Dobells as it was the only shop in London to stock African, Irish, Yiddish and music from other parts of the world.

Those of us who spent happy hours (and dollars or pounds or the prevailing currency) in specialist record shops — where one could converse or debate with an educated, impassioned salesperson about the course of Bud Powell’s career — will find this exhibition powerfully evocative.  The generation that has no idea of what came before invisible digital sound should be gently escorted there . . . for a greater historical awareness.

Here’s a postscript and a photograph from my UK friend Robin Aitken, someone who knows:

This exhibition is only a precursor for a more long term project which is in the preparation stage at present. This will be a book on Dobell’s Jazz Record Shop edited by myself and Brian Peerless who worked part time in Dobell’s from 1962 until its final closure in 1992. It is intended that the book will be in the same format as Nat Hentoff’s wonderful “Hear Me Talkin’ To Ya” with sections on the history of the shop, the staff, the customers, the stories , the music and of course the musicians. We are assiduously collecting material and welcome any contributions from anyone who has visited the shop over the years. In 1972 a contingent of staff and customers, myself included, made to trip to New York for the First Newport Jazz Festival there. There were ten of us on that trip – sadly only four of us survive. The Dobell’s exhibition has prompted me to finally put down my memories and those of my surviving companions of a wonderful 2 weeks in the Big Apple. I took several photographs which I hope to include in the article and I have attached one of my favourites. This was taken outside Jim & Andy’s at West 55th Street in late June 1972 just before Jim closed for the month of July. It shows from left to right the drummer Richie Goldberg, John Kendall, Manager of Dobell’s Second-hand Shop, Ray Bolden, Manager of the Blues and Folk Shop, Scoville Brown who played with Louis in 1932 and nearly everyone else thereafter – some great records with Buck Clayton on HRS in 1946, and Doug Dobell himself, the owner of Dobell’s Jazz, Blues and Folk Record shops.

(Notice the record bag Richie Goldberg is holding — the thing in itself!)

Posted in "Thanks A Million", Awful Sad, Bliss!, Ideal Places, Irreplaceable, Jazz Titans, Pay Attention!, Swing You Cats!, That Was Fun!, The Real Thing, The Things We Love

Before he became more “fatherly” in his films; before he became grandfatherly on television (the man with a narrow tie and a hairpiece, singing Christmas songs alongside David Bowie and Michael Buble), he was a genuine all-purpose wooer.

A chick magnet, to put it plainly.

In many of his early films, the setup is simple: a lovely blonde, splendidly dressed (often in white) is reserved, cool, or even sullen.  Bing aims that voice at her, in a yearning love ballad, and she melts in a series of reaction shots.  Once the song is over, she has fallen for him.    One can imagine tuxedo and gown being shed . . .

In some of the later films, Bing is moved from the more formal environment to more working-class environments: once a pianist / singer or a college professor teaching crooning, he is a sailor dangling from a rope, a man building a shelter for the castaways, a cowboy.  Yes, he’s in blackface for ABRAHAM and pretends to play the clarinet for THE BIRTH OF THE BLUES.

I don’t think I have to make a case for Bing’s easy rhythmic suppleness, that his “boo-boo-boo” runs parallel to scat singing, that he is one of the influences on a segregated America that made Caucasians receptive to African-American jazz, even when Louis was not in the picture.  He swings, even at ballad tempo.

And for those theoretically-minded, Bing is deep in meta-consciousness of a post-modern sort, singing songs about his own singing.  But enough of that.

These thoughts were provoked by an accidental YouTube discovery —  thanks to 1926VictorCredenza  — his generous offering of a nearly two-hour videocassette of Bing’s musical moments from his 1932-42 films.  The Sennett shorts aren’t here, nor is PENNIES FROM HEAVEN, but I saw performances new to me.  You’ll also see Martha Raye, Carole Lombard, Louis Prima, Jack Teagarden, Harry Barris, Mary Martin, Eddie Lang.  And for Ralf Reynolds: Bing plays a washboard in that last film.  Watch for it!

I offer this as a prelude to Valentine’s Day.  Learn to croon — if you want to win your heart’s desire!  (And she’ll take off her shoes.)

TWO FOR TONIGHT 1935:  From The Top Of Your Head / Without A Word Of Warning / I Wish I Were Aladdin

WAIKIKI WEDDING 1937:  Blue Hawaii / Sweet Leilani / Sweet Is The Word For You

EAST SIDE OF HEAVEN 1939:  Hang Your Heart On A Hickory Limb / East Side Of Heaven

BIRTH OF THE BLUES 1941: Goin’ to the Jailhouse / The Waiter, The Porter, and The Upstairs Maid / Wait ‘Til The Sun Shines Nellie / St. Louis Blues / Birth Of The Blues.

Posted in "Thanks A Million", Bliss!, Generosities, Hotter Than That, Irreplaceable, Jazz Titans, Pay Attention!, Swing You Cats!, That Was Fun!, The Heroes Among Us, The Real Thing, The Things We Love